The girls stolen from the streets of India 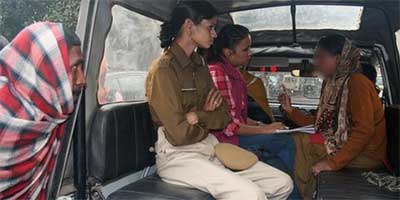 Rukhsana (right) talks to police about her kidnapping

The girls stolen from the streets of India

The widespread killing of female foetuses and infants in India is well-documented, but less well-known is the trafficking of girls across the country to make up for the resulting shortages.

Rukhsana was sweeping the floor when police broke into the house.

Wide-eyed and thin, she stood in the middle of a room clutching a broom in her hand.

Police officers towered above her, shouting questions: "How old are you? "How did you get here?"

"Fourteen," she replied softly. "I was kidnapped."

But just as she began to say more, an older woman broke through the circle of policemen. "She is lying," she shouted. "She is 18, almost 19. I paid her parents money for her."

As the police pushed the girl towards the exit, the woman asked them to wait. She leaped over towards the girl and reached for her earrings. "These are mine," she said, taking them out.

A year ago, Rukhsana was a 13-year-old living with her parents and two younger siblings in a village near India's border with Bangladesh.

"I used to love going to school and I loved playing with my little sister," she remembers.

Her childhood ended when one day, on the way home from school, three men pushed her into a car.

"They showed me a knife and said they would cut me into pieces if I resisted," she said.

After a terrifying three-day journey in cars, buses and on trains, they reached a house in the northern Indian state of Haryana where Rukhsana was sold to a family of four - a mother and her three sons.

For one year she was not allowed to go outside. She says she was humiliated, beaten and routinely raped by the eldest of the three sons - who called himself her "husband".

"He used to say, 'I bought you, so you do as I tell you.' He and his mother beat me. I thought I would never see my family again. I cried every day," she said.

Tens of thousands of girls disappear in India every year. They are sold into prostitution, domestic slavery and, increasingly, like Rukhsana, into marriage in the northern states of India where the sex ratio between men and women has been skewed by the illegal - but widespread - practice of aborting girl foetuses.

The UN children's agency Unicef says it's a problem of "genocide proportions" and that 50 million women are missing in India because of female foeticide and infanticide - the killing of baby girls. The Indian government disputes this estimate, but the reality of life in Haryana is hard to argue with.

"We don't have enough girls here," the woman who bought Rukhsana cried as she tried to convince the police to let her stay. "There are many girls from Bengal here. I paid money for her," she wailed.

There are no official statistics on how many girls are sold into marriage in the northern states of India, but activists believe the number is on the rise, fuelled both by demand for women in the relatively wealthy north, and poverty in other parts of India.

"Every house in northern India is feeling the pressure, in every house there are young men who cannot find women and who are frustrated," says social activist Rishi Kant, whose organization Shakti Vahini (or Power Brigade) works closely with the police to rescue victims.

In just one area, the Sunderbans in the South 24 Parganas district of West Bengal, the BBC visited five villages all of which had missing children, mostly girls.

According to the latest official data, almost 35,000 children were reported missing in India in 2011 - and over 11,000 of them were from West Bengal. Police estimate that only about 30% of cases are actually reported.

Trafficking peaked in the Sunderbans after a deadly cyclone destroyed rice paddies around the area five years ago.

Local farm worker, Bimal Singh - like thousands of people - was left without income, and so he thought it was good news when a neighbour offered his 16-year-old daughter Bisanti a job in Delhi.

"She went on a train. She told me 'Father, don't worry about me, I will come back with enough money so that you can marry me."

They never heard from her again.

"The police have done nothing for us. They came once and knocked on the door of the trafficker but they didn't arrest him. They don't treat me well when I go to them, so I am afraid to go to the police," Singh says.

Selling girls for a living

In a Calcutta slum we manage to meet a man who sells girls for a living. He doesn't want to give his name, but speaks openly about the trade.

"The demand is rising, and because of this growing demand I have made a lot of money. I now have bought three houses in Delhi.

"I don't go to the source areas, but I have men working for me. We tell parents that we will get them jobs in Delhi, then we transport them to placement agencies. What happens to them after that is not my concern," the man says.

"Police are well aware of what we do. I have to tell police when I am transporting a girl and I bribe police in every state - in Calcutta, in Delhi, in Haryana.

"I have had troubles with authorities but I am not afraid - if I go to jail I now have enough money to bribe my way out."

The head of the Criminal Investigation Unit in charge of anti-trafficking in West Bengal, Shankar Chakraborty, describes police corruption as "negligible" and says his unit is "absolutely resolute" in its determination to tackle the problem of trafficking.

"We are organising training camps and awareness campaigns. We have also recovered many girls, from different areas of the country. The fight is on," he says.

The very existence of his unit, he adds, shows the government's resolve and activists agree that police are now more aware of the problem. Every police station in West Bengal now has an anti-trafficking officer. But their caseloads are overwhelming, and resources are scarce.

"Simply changing the police will not give results. When we rescue a child together with the police, then what?" says Rishi Kant from Shakti Vahini.

"What we need is fast rehabilitation. We need social welfare and judiciary systems that work."

Rishi Kant says there is a need for fast-track courts - like the court being used to try the suspects in the latest gang-rape case - to prosecute perpetrators, and make it more difficult for them to get out on bail.

Even greater, some argue, is the need for a change in attitudes.

Two weeks before the notorious Delhi rape case, a group of influential local elders, all of them men, came together in a Haryana village to discuss what they called the most pressing issues their communities face - rape, illegal abortions and marriage laws.

One speaker addressed what he called an "alarming" increase in rape cases. "Have you seen the suggestive ways that girls ride scooters?" he said. "There is no modesty in the way women dress or act any more."

Another man spoke about the roots of female foeticide. "These days the society has become very educated and the girls from this educated society have started eloping. When girls bring shame on their own parents and behave like that - who would want a girl?" he asked.

Rupa, a 25-year-old woman was trafficked to Haryana from Bihar. She was sold as a wife to a man who failed to find one in his own community. The family forced her to have two abortions until she was finally pregnant with a baby boy.

In India, the cycle of abuse carries on.