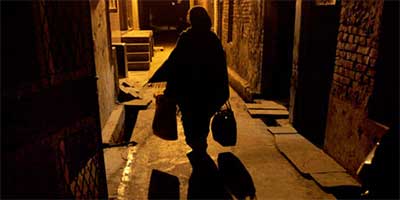 Impoverished women in India are increasingly falling victim to unscrupulous agents who force them into harsh domestic labour or sex work in the Middle East. | Photo: Manish Swarup/AP

In India, unscrupulous agents promise women well-paid work abroad, but in reality the victims end up sold as sex workers.

The two women sit in a grimy flat in west Delhi. The sound of traffic filters through the curtained windows. It is dark and they are talking about their rescue a few hours before and how – if – they might get back to their homes almost 1,000 miles away.

Malti, 22, and Sita, 35, were promised well-paid jobs in the Middle East. Neither reached the Gulf. Instead they were stripped of their valuables, travel documents and phones and held with 18 others in one room in a rundown apartment in the Indian capital for four months. Denied any outside contact, they were freed only when police, acting on a tip-off, raided the "human warehouse" where the women were being kept.

The pair are victims of a new wave of abuse as more and more women from India are recruited by unscrupulous agents for jobs in the Middle East.

There were 3,517 incidents relating to human trafficking in India in 2011, says the country's National Crime Records Bureau, compared to 3,422 the previous year. Most involve women, often from very poor backgrounds, being seized forcibly or misled into lives of harsh domestic labour or sex work within India. But increasingly police and campaigners are uncovering illegal operations which channel women to countries such as Saudi Arabia, Bahrain or the United Arab Emirates.

Many work without problems, sending much-needed cash back to their families. But others fall prey to unscrupulous and often violent intermediaries. An increasing number are forced into prostitution.

Anis Begum, 27, an almost destitute mother-of-four from Hyderabad, southern India, said she had paid 10,000 rupees (£120) to an agent to go to Saudi Arabia after being promised well-paid work as a maid. Instead, she was locked in a storeroom and then sold as a sex worker at an auction for the equivalent of £300, beaten, imprisoned and abused. "I was scared I might get pregnant. If I did, I thought they might kill me," she said. She was freed by her captor's wife after months of confinement in one room at their home in Riyadh, the Saudi capital.

Such stories are increasingly familiar to police. The problem of human trafficking is huge, said Neeraj Kumar, Delhi's police chief. One case last year, was an eye-opener, he said. Nearly 40 women were intercepted by police at Delhi airport in an operation launched in co-operation with authorities in Mumbai and the United Arab Emirates. They were destined for brothels, investigators believe.

In another police operation last April, a trafficking ring in Bangalore which had sent more than 200 women to the Gulf was broken up. The gang received around £2,500 for every woman they delivered to brothels in Muscat and Dubai.

Most of the women recruited by the agents come from severely deprived backgrounds and are often illiterate. Unable to verify inflated or misleading claims, they travel willingly. In the Bangalore case, the women were told they were to be maids and then forced into sex work. Those freed in the Delhi operation were told they would be dancers. Anis Begum was told she could earn £125 a month, four times her wage as a hospital cleaner.

The two women released from the Delhi flat-cum-prison were typical of many victims. No one had forced them to leave their homes and Malti, from northern West Bengal, had already spent two years in Saudi Arabia, where she was neither abused nor denied pay, as a domestic servant. She was trying to return to the Gulf for more work when she got involved with the agent who imprisoned her.

Sita, an illiterate mother of five whose husband earns around 130 rupees a day (£1.60) as a labourer when he can find work, had little idea where she was going or what awaited her when she left her village, also in India's poverty-stricken north-east, late last summer.

"I was told I was going to earn a good salary by a woman who came to my home. I need to feed my children so I went with her. I had high hopes. She brought me to Delhi in a train but then I was locked up," Sita said.

One reason for the women's imprisonment in Delhi could have been a problem with paperwork, perhaps an official who had not been paid off. Mandha Bheem Reddy, a campaigner with the Indian Migrants' Rights Council, said corruption was endemic among border control officers.

"They often give clearance for poorly educated or even illiterate women who are particularly vulnerable. Many of these women can be stopped at the airport when questioning shows they have probably not met the requirements for emigration to the Gulf countries but they are allowed to leave," he said.

Anis Begum said her travel documents had been falsified to get round Indian laws designed to restrict abuse. "[The agent] told me to tell the emigration desk at Hyderabad airport that I was going to Dubai to visit my aunt. When they asked me too many questions, I called him and handed over the phone. Once he spoke to the official, they let me through," she said.

Last month an Air India employee was arrested at Delhi airport for falsifying boarding passes to allow workers to travel overseas illegally. A police officer was also involved in the scam.

Even substantial bribes to officials do not dent profits. "There is a lot of money at stake," said one Bahrain-based activist who works with Indian domestic workers in the Gulf state. "Employers over here are willing to pay up to 800 Bahraini dinar (£1,350) to an agent to bring a [maid] from India. Agents are taking money from both the employers and workers and in the process cheating both parties."

Once in the Gulf, workers have little protection. A recent Human Rights Watch report described migrant domestic workers in Saudi Arabia working 15 to 20 hours a day with no holidays and few breaks, minimal access to healthcare and poor accommodation. Many reported sexual abuse by employers.

According to the US state department, the kingdom is a "destination country" for men and women being trafficked for labour and, "to a lesser extent, forced prostitution".

Some are forced to work in brothels or simply abused. There are frequent reports of such incidents in the Indian press. In May last year a 21-year-old told recounted how she was forced to dance in a bar in Bahrain with 20 other women from the northwestern province of the Punjab by a violent trafficker before she drank chemicals to force him to bring her back home.

In August last year, authorities in Dubai arrested four people accused of running a prostitution ring after members allegedly beat up a Bangladeshi woman and held her in a cell where she was raped and pimped to paying customers. In Sharjah, another of the United Arab Emirates, a decades-old business which took impoverished Indian women who had been promised jobs in supermarkets or as housemaids and forced them into prostitution was uncovered by police in November.

Campaigners admit that as abuses occur overseas they are difficult for Indian authorities to deal with. But the agents are "here, not there", said Subhash Bhatnagar, the Delhi-based activist who received the tip-off which led to the raid on the "human warehouse" and freed Malti and Sati.

"There were maybe 40 or 50 girls who spent time in the flat while we were there," said Malti. "All were supposed to be going to Saudi Arabia, Kuwait or somewhere else in the Gulf. Every week one or two of them would disappear, probably flown off to the Middle East. But most of us stayed put. No one had any money or contacts. We were helpless."

Conditions were harsh. Food, brought in from outside, was bad and there was no privacy.

"It was cramped, everyone was ill, there was no work and no one gave us any money. We were not allowed phone calls or any contact with relatives or friends. Our mobiles were confiscated and we were physically stopped from leaving. We kept asking when we would be going to Saudi Arabia. They just said soon," Malti said.

As their imprisonment entered a fifth month, Malti managed to contact a distant acquaintance through a sympathetic intermediary. Eventually word reached Bhatnagar, the activist, who informed the police. An hour or so later, the "warehouse" had been raided, emptied and three men detained.

"I am very happy," said Sita. "I'll be more careful in future.I'd still try again though. I need the work to feed my family."

But for Anis Begum in Hyderabad, indebted, traumatised and ostracised as a result of her ordeal as a forced sex worker in Riyadh, the struggle to rebuild her life has only just begun. She has attempted to bring charges against the agent who sent her to Saudi Arabia but has been told by police that he cannot be found.