India work-skills program makes a dent in disrespect for women 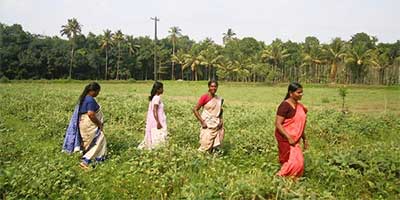 India work-skills program makes a dent in disrespect for women

Vilasini Ramachandra lilts through a field in delicate sandals in southern India's Kerala state, proudly pointing out the bounty she and her friends have teased from the rich earth: here the tapioca; there the elephant yams; farther afield, the turmeric.

After years of backbreaking work carrying bricks on a construction site, Ramachandra heard about Kudumbashree, a state program that teaches farming and other skills to impoverished women. Years later, she's accumulated modest savings and has control over her own time, along with a confident glint in her eye.

"I can buy a sari when I want without having to ask my husband, who's a bit into the coconut wine," said Ramachandra, 51, the red bindi on her forehead glinting in the afternoon light. "Our group of women farmers is very tight. And the work is good for our looks. With this work we don't put on weight."

In a country where men often corner the best rural work opportunities, Kudumbashree offers a lifeline for 3.7 million women in Kerala, helping them till the soil, run shops and design garments and handicrafts, aided by their savings and government-subsidized loans.

Farms run by women are a refreshing counter-narrative in a country that's been in the news more lately for sexual assaults, discrimination and low female social status.

"There's very little respect for women in this society, and that needs to change," said Radha Rajan, 51, a partner in Ramachandra's four-farmer group.

Kudumbashree, which means "family prosperity" in the Malayalam language, was created in 1998 by the state's then-communist government. Property owners with fallow land lease it to cooperatives of four to 20 women. After covering costs, the women split the proceeds.

Even more important than the money, many of the women say, is the respect.

"I like that I'm standing on my own feet," said Ramani Ayappan, 42, with a beige sari and a face scarred by smallpox. "I can now feel like I'm part of society."

Something as simple as submitting an application to financial institutions or government agencies, a task rarely undertaken by women, can build confidence.

"For many, a bank's been an alien building," said Anoop Kattiplackal Mohanan, a Kudumbashree district consultant.

Equally important are the lessons learned from failure, farmers say. Last year, Ramachandra's group took out a $6,000 loan and expanded aggressively. The weather didn't cooperate and they lost almost everything. This year was better, and they've repaid most of the money.

"Our group's close bonds allowed us to hang in there despite this deep financial crisis," Rajan said. "Other groups ended terribly after similar incidents. We learned a lesson about taking it slowly."

The solidarity and management skills that participants learn have helped 5,000 women win election to local office in Kerala, said Ananya Mukherjee-Reed, a political science professor at York University in Toronto.

About 260,000 members of Kudumbashree till 60,000 acres in Kerala, a state that markets itself as "God's own country," where coconut palms dance in gentle breezes on the edge of lush fields and winding roads, the idyllic bliss interrupted by tacky billboards hawking tea and wedding jewelry.

Landowner Varuny Peter leased land to Kudumbashree on his family's 4-acre rice farm as costs rose and his only daughter eschewed the agricultural life. "Now I can work less and enjoy more," he said in his large house on a hill, wearing a yellow short-sleeve shirt and oversized glasses.

Many of the collectives grow organic vegetables, which can sell at a 10% premium, with Indian consumers reacting to food poisoning and other scandals. At harvest time, dozens of cooperatives join forces, selling their produce in local markets at fixed prices, a no-haggle approach many consumers appreciate.

Kudumbashree has faced its share of hurdles. Some landowners balked at renewing leases after local courts extended partial ownership rights to longtime laborers. The farming program also tends to attract older women, not the twentysomethings who have the most difficulty finding jobs.

Occasionally a cooperative has a member who won't pull her weight, a significant problem for people pooling profits. Most rely on peer pressure. "We start grumbling at them and most leave voluntarily," said Gracy Pappachan, 57, a former day laborer.

Husbands have mixed reactions to the program, in a country where many women are expected to stay at home.

"Even if they have problems with us working, almost every husband likes to have the money coming in," said Rosely, 54, a homemaker before joining Kudumbashree, who uses one name.

About 70% of India's jobs are in rural areas, even as female employment in the countryside declines amid a growing population and more mechanized farming.

"There are fewer jobs and more competition, so men take them," said Neetha N. Pillai, a senior fellow at New Delhi's Center for Women's Development Studies, a think tank. "That's always how it happens."

The situation has prompted New Delhi to consider using Kudumbashree — which by some accounts has brought nearly 10% of Kerala's fallow land under cultivation — as a model for national rural livelihood programs.

Some question how transferable the program is, however, given Kerala's unique qualities. Women here have long had better education and higher status than many in other parts of the country. The state also has a labor shortage and large numbers of men working overseas, affording more opportunities for women.

"In practical terms, I have my doubts it can be reproduced in other states," Pillai said.

Though programs like Kudumbashree help raise women's status, the country still has a long way to go, analysts said.

"It offers some solutions, but bigger problems remain, including patriarchy, rape, harassment," said professor Mukherjee-Reed. "But when you meet women who've been sexually abused and they still feel inspired to go do this work, who am I to say it's nothing."