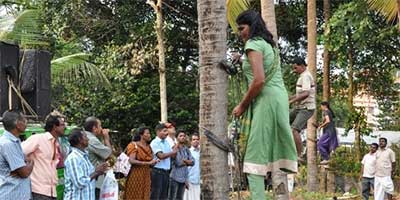 Shimmying up coconut trees to harvest coconuts was always a man’s job in India. But Lissy Thottiyil, a 43-year-old mother in southwestern Kerala state, is among a rising number of women bucking the trend.

Every day except Sunday she climbs coconut palms, which earns her about 1,500 (US$25) rupees per day, a great deal more than the roughly $3 per day she made just a few years ago doing odd jobs.

"I opted for coconut climbing when I could not meet the cost of feeding my family," said Thottiyil.

With hundreds of women joining the coconut industry, not only are they reviving a lucrative industry which looked to be facing extinction, they are starting a "social revolution".

A job which requires skill and no little strength to get up trees which can reach above 20 meters, for centuries men of the lower south Indian Paravas caste dominated the industry.

In the past two decades, the industry went into decline in India – the third biggest coconut producer after Indonesia and the Philippines – as many climbers abandoned this dangerous and arduous profession in favor of better paid work overseas, particularly in the Middle East.

Five years ago, the coconut industry hit an all-time low in India with many farmers abandoning cultivation due to a lack of workers to complete the harvest.

“Farmers were ready to pay but there were not many willing to take up this hard job,” said TK Jose, chairman of Kerala’s Coconut Development Board.

Then two years ago, he introduced a simple pedal-operated contraption which uses the climber’s weight, meaning anyone can get up and down a palm tree following a week of training.

"We focused on women and young men who needed a job – it proved to be right," said Jose.

Since August 2011, 17,000 Indians have taken the free training course, more than 14,000 of which have been in Kerala which accounted for nearly half of the country’s $210 million in coconut sales last year.

With about 4.5 million people unemployed in Kerala, the revival of the industry has helped to get people back to work, including women.

Last month, US consulting services company Gallup Inc found that South Asia has the highest gender gap in employment rates of any region in the World.

'On top of the world'

Mariayambi Pareed, 27, may be among the most educated young women picking coconuts. She has a diploma in civil engineering but got trained in climbing coconut trees and opted for this industry instead because of the freedom and good pay.

"I really enjoy the job and love to climb coconut trees. When I'm on top of a tree I feel like I’m on top of the world," said Pareed.

She said that she hopes more young women will master the skill.

And while the coconut industry appears to be helping women find well-paid jobs, still the resurgence of the industry is dominated by men – only 600 Indian women have taken training in the past two years, or roughly 3.5 percent of the countrywide total.

But that’s better than no women working, as was the case before in India's coconut industry, said Father Michael Vetickat of Kottayam archdiocese in Kerala.

Women like Thottiyil have “triggered a silent social revolution,” he added.

“They match men in their jobs and are empowered and confident. Their income has changed their roles in families. They have become decision-makers,” said Vetickat. “It’s a dramatic change.”