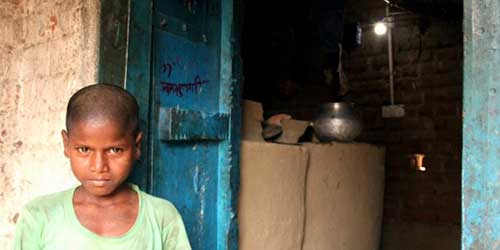 Sanju Manjhi, the son of Suresh Manhji, stands in the doorway of his solar-power-lit home in Dharnai village, in India's Bihar state. | Photo: Avik Roy

Suresh Manjhi, 30, no longer has to walk five kilometres to and from Makhdumpur, the nearest town, to charge his mobile phone, or rely on kerosene-fuelled earthen lamps for light once darkness falls. These days, the street outside his home is brightly lit at night.

Life has been transformed for the 2,400 residents of Dharnai, a village in Bihar, India’s poorest state, by the completion of a solar-powered micro-grid, bringing them light and power for all their daily needs after 30 years with no electricity.

The micro-grid, switched on by the village’s oldest inhabitant in late July, made Dharnai the first fully solar-powered village in India, according to Greenpeace India, which funded and carried out the project with two other non-governmental organisations. The organisations hope it will become a model for some 80,000 other Indian villages whose lack of electricity has held back their development for decades while cities grew and prospered.

For over 30 years, since the village’s electrical transformer stopped working because of erratic power supply, power lines have passed close to Dharnai without lighting up a single home in the village – even though the village is only 70 kilometres from the state capital, Patna, and 40 kilometres from Gaya, a pilgrimage city of temples and shrines.

"While India was growing by leaps and bounds, we were stuck here for 30 years, trying everything in the book to get electricity. We were forced to struggle with kerosene lamps and expensive diesel generators," said 40-year-old entrepreneur Kamal Kishore, a village resident.

Now the lights are on in Dharnai, which has attracted attention throughout Bihar. The state's former chief minister, Nitish Kumar, who visited Dharnai in early August, said that "solar energy is the only solution" to the energy problems faced by villages in Bihar.

The 100 kilowatt micro-grid, launched by Greenpeace India with the help of NGOs BASIX and the Centre for Environment and Energy Development, was built in three months and went live after four months’ testing. It powers 60 street lights and provides energy to 450 homes and their 2,400 residents, as well as 50 commercial establishments, two schools, a training centre and a healthcare facility.

The system works after dark or on cloudy days by using a battery bank that stores energy from 280 photovoltaic solar panels.

“Today, children are studying well and women are able to cook late in the evening. Villagers are getting many benefits from this venture, including commercial establishments”, said 65-year-old farmer Ashok Kumar Singh.

The villagers previously depended on kerosene-fuelled lamps that cost them 200 to 250 Indian rupees ($3.25 to $4) a month to operate. Now, they can switch on their lights and fans, charge their mobile phones and watch television for just Rs.75 to Rs.110 ($1.25 to $1.75) a month. Greenpeace officials said the grid has sufficient capacity for villagers to plug in refrigerators and water heaters as well.

The Dharnai project was carried out with the involvement of local community members and organisations, such as the gram sabha (a forum of adult members of the community) and the panchayat (local council).

“The tariffs were in fact decided by the community itself after mutual understanding and discussions. The community is also part of the village electrification committee that will handle the day-to-day running of the micro-grid,” said Greenpeace’s public engagement coordinator, Nagesh Anand.

Dharnai’s experience suggests that community-wide access to energy can be achieved without using fossil fuels such as coal. Such micro-grids can “be the answer to the intense policy and vision paralysis that India’s energy sector faces today,” said Naveen Mishra of the Centre for Environment and Energy Development.

Greenpeace India paid for and installed the Dharnai micro-grid at a cost of Rs.2.75 crore ($452,000), hoping it can become a model for other systems around the country.

“We were scouting for villages in Bihar to establish a micro-grid project on renewable energy and arrived at Dharnai. We felt that a village which lies by the National Highway, has a railway station and all the social infrastructure but no electricity was the right village to showcase our solution”, said Manish Ram, a renewable energy analyst for Greenpeace India.

NOT JUST FOR ISOLATED VILLAGES

“We wanted to prove that micro-grids for renewable energy can power villages which are on the path of development and are not limited to (use in) remote and isolated areas. The village has the right mix of commercial establishments, houses and agricultural activities to demonstrate a bottom-up approach to electrification that can take care of the social and economic needs of the people,” he said.

Bihar, a poor state with many villages in remote rural areas, has faced chronic electricity supply shortages for decades because of inadequate investment in generation and distribution capacity. The 2011 census showed that 82 percent of the state had no electricity.

Now, “the best thing is that there are no power cuts in Dharnai,” said Santan Kumar, a local electrician.  “Even in Patna, you are never sure if the lights will be on when you are studying or cooking at night. But our electric supply system is dependable, reliable and managed by us.”

Women in Dharnai say the solar energy system has given them better chances to get an education and live their lives with dignity, with better health, more safety and choices of work.

“We had a lot of problems in the past, but since the lights have been installed in our homes it has been easier for us to cook and for our children to study. We can walk around in the streets at night without any fear,” said Ranti Devi, a resident in her 70s.

Avik Roy is a journalist based in New Delhi.