In the Shadow of Fukushima 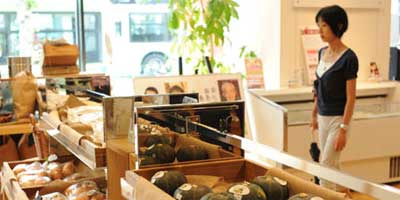 The Japanese are among the most health conscious people in the world. They priding themselves on their longevity and traditionally have prized food that is locally produced which they enthusiastically consume raw.

In the Shadow of Fukushima

It was the stories of the pregnant women that Jonathon Watts found most harrowing.

The journalist, who lived in Japan for years, had travelled back to Fukushima in north-east Japan as well as the capital Tokyo to look at life after the nuclear disaster of March the 11th. He was confronted with a climate of fear, mistrust and disorientation.

He spoke to several women who had found out that they were pregnant just before the tsunami struck the coast of Japan and sent 3 reactors of the Fukushima-Daiichi nuclear plant into partial meltdown. Since then they have been wracked with such anxiety that one of them had even considered suicide. She told Watts how she would be "filled with dread" every time she went for an ultrasound and, despite the assurances of her doctor that there were no abnormalities, she would check and recheck the picture several times counting and recounting the number of toes and fingers on her unborn child, unable to believe everything might turn out all right after all.

Radiation is terrifying because it is invisible, silent and scentless and, by potentially altering DNA, its effects might come back to haunt you years or even decades in the future. Or they might not. But it is the uncertainty that can drive people to distraction.

If we look at the communities in the area around Chernobyl, the site of the world`s worst civil nuclear disaster, this uncertainty has its own implications for public health. It's a nagging unease that can stop people believing in their future "It can affect their lives in ways that can be quite destructive," says Watts, "they move, they divorce, they argue more, sometimes they turn to drink."

In 2006 the World Health Organization penned a report into the health implications of the Chernobyl disaster in the two decades after the initial explosion. The report found that the psychological effects of the radiation leaks had been the most widespread health impact of the disaster. Many evacuees had became lonesome exiles and felt disconnected after the upheaval of moving. This added to the persistent fear of serious illness and in extreme cases led to many people, in the words of a doctor I met on my trip to Belarus "giving up on life". Some medics estimate the impact of these stress levels might be more damaging than the relatively low levels of radiation.

Watts describes the effect as a "lingering fear". People who have been living near the scene of nuclear disasters are told that they have a slightly higher than normal chance of developing cancer and so "wake up and see a blemish on their skin or feel a tickly cough and fear it might be the first sign of a deadly disease."

Hysterical reporting in the media is partly to blame but so too are the authorities who have admitted to withholding the true extent of the disaster in March for fear of creating a panic. Now they are like "the boy who cried wolf" – if they downplayed the risk with what Watts describes as "mealy mouthed reassurances" then why should people believe that they are telling the truth now? Watts says that this public confidence has been eroded further by several recent stories that have exposed the close ties between the nuclear industry and Japan's political parties as well as academics experts who had been trying to reassure the public as well as parts of the main stream media.

The anxiety stretches far beyond the area around the Fukushima-Daiichi nuclear plant, which is still spewing out radiation day after day. In the aftermath of the disaster levels of radiation levels rose of broad swathe of Japan including parts of Tokyo and had led people to question how safe the government's "safe levels" really are.

The government has lifted the safety baselines so that that radiation levels that would considered elevated before March the 11th have now been decreed officially acceptable. This has made it easy for the Japanese government to continue with business as usual, meaning that food can still be sold and children don't have to be moved from schools in areas close to the exclusion zone, but it has caused considerable disquiet among the population.

The Japanese are among the most health conscious people in the world.

They priding themselves on their longevity and traditionally have prized food that is locally produced which they enthusiastically consume raw. But now Jonathon Watts' friends in Tokyo are looking for food that was produced from as far away as possible and preferably frozen to ensure it was grown before the 11th of March:

"It's really turned a lot of assumptions and life-style choices on their heads."

There are now stickers in some shops denoting products that have been tested for radiation and a voluntary group has been set up by a journalism which has set up a "Citizen's Radiation Monitoring Centre" where you can bring in your vegetables and have them put through a machine which calculates the radiation levels. People have been bringing in their potatoes from their allotments or cabbages from their vegetable gardens as well as produce they have bought in supermarkets. Some travel hours to use to facility. It takes around 20 minutes to conduct the test which is only reassuring, of course, if the levels are not elevated.

Some citizens have been trying to fight radiation with novel means. A Zen monk called Kouyuu Abe has persuaded the government of Fukushima province to plant millions of sun flower seeds in the belief that the seeds will soak up the radioactive cesium in the soil. The bright flowers, which will later be destroyed in a controlled environment, are a picturesque symbol of resistance but Watts fears that their efficiency as radiation cleaners is doubtful at best.

It will take a lot more than pretty flowers to make life around Fukushima return to normal.