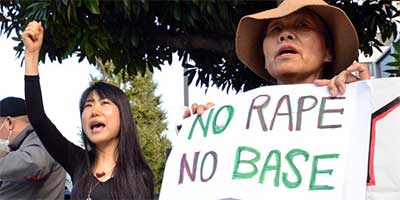 Legislators of the Japanese island chain of Okinawa have passed a resolution expressing "overwhelming indignation" at the alleged rape of a Japanese woman by two US servicemen.

The resolution approved on Monday demanded proper punishment and victim compensation in the rape case.

The legislature says 5,747 crimes are on record involving US military personnel since Okinawa was returned to Japan in 1972. It says that in some cases criminal activity is getting worse.

The resolution said US military top officials were not doing enough to control their thousands of personnel present in the area.

"Yet another incident has taken place. In fact, the severity of the incidents is intensifying," it said. "With overwhelming indignation, we must question the present efforts of the US forces to prevent such incidents from happening."

The arrest last week of two 23-year-old sailors for the rape of a local woman worsened already strained ties between the large US military contingent and their island hosts.

The US Forces have imposed an 11pm to 5am curfew on all military personnel in Japan in response to the incident.

The resolution demanded "a fundamental review of the Japan-US Status of Forces Agreement", which Okinawa governor Hirokazu Nakaima said effectively made the island an extraterritorial space for the US military.

The agreement limits the authority of Japanese investigators to prosecute US personnel, giving jurisdiction to the American military. Opponents say it too easily leaves criminals unpunished.

"We are so fed up with this because incidents like this have often occurred since before," Nakaima told reporters as he arrived in Washington on Sunday, where he is due to attend a symposium.

"I must let [Americans] know of such sentiment in Okinawa."

Previous criminal incidents, including the gang rape of a 12-year-old by three US soldiers in 1995, sparked angry large-scale demonstrations, with protesters demanding a smaller US presence.

About half of the 47,000 US military personnel based in Japan are stationed in Okinawa.