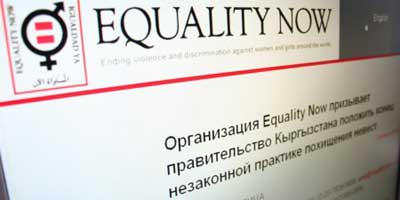 According to the Forum of Women’s NGOs of Kyrgyzstan, about 35–45% of marriages of ethnic Kyrgyz women take place against their will, as a result of bride kidnapping.  In some villages, the number is as high as 50%.  A bill is currently before the Kyrgyz parliament aimed at strengthening the law on bride kidnapping.  It passed its second reading on October 18th and a third and final reading is expected in the near future – a key legal requirement for it to be enacted.  However, it is far from certain that the bill has enough political support to successfully pass through parliament.  Equality Now urges the public to continue to write to the government to ensure that the bill passes, but also that alleged cases of bride kidnapping are properly investigated and appropriate prosecutions are subsequently sought.

Bride kidnapping is an extreme form of violence against women.  It violates the basic rights of women to bodily integrity, freedom of movement and freedom from violence.  It leads to forced marriage, rape, servitude and denial of educational and other opportunities.  Research carried out by Public Foundation Open Line in 2010 found that almost three quarters of kidnapped Kyrgyz brides experienced threats and other forms of violence from the kidnapper and his family, forcing them to stay.  Nearly a quarter of women revealed that they had been raped before marriage, while one respondent was determined to report the kidnapping to the police after escaping.  However, she was abducted again and raped by the kidnapper.  This forced her to accept the marriage.  The stigma attached to an unmarried girl spending a night with a man (whether or not there is rape) is too much for both victims of bride kidnapping and their parents, so many reluctantly agree to the marriage.  For some victims, the kidnapping and subsequent forced marriage is too much to bear.  In 2010, two young women tragically committed suicide in the Issyk-Kul Province after being kidnapped and forced into marriage.

“We call on the Kyrgyz government to ensure the successful passage and timely implementation of robust legislation which protects the fundamental human rights of all members of society.  We also urge them to ensure that alleged cases are properly investigated, perpetrators are prosecuted and that an awareness-raising campaign is fully implemented as part of a comprehensive prevention strategy”.

For further information on the issue and to take action, please click here.