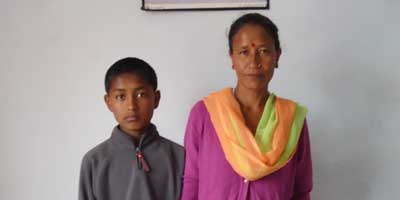 11 year old Niraj with his mother Purna Kumari. Three years ago, Niraj's dad died while he was working as a labourer. When Suzy got to know Purna Kumari, she found out about her background (a dalit belonging to a 'lower-clasee'), ill-health and poverty stricken situation. MUTU Nepal was able to pay for Purna's hospital fees and also sponsored her for the resources needed to start a candle making business.

Suzy Solley, co-founder of a new charity, Mutu Nepal, spoke to David Lyons about how she hopes to end hundreds of years of prejudice.

Where Widows are Viewed as a Curse on Society

Widows in Nepal are ostracised from society, and abused financially and psychologically by the communities they live in.

Even after researching the plight of Nepalese widows for a number of years, the deeply ingrained prejudices these women face still have the power to visibly upset Suzy Solley:

Suzy with 11 year old Sushmita and her family. Through the sponsorship of MUTU Nepal, Sushmita is able to attend school. “Up until 1910, when a man died, his widow had to commit suicide. Sometimes they were pushed and sometimes they did it voluntarily.”

“The belief is that they did something bad in a past life, which made their husband have bad luck. People think they’re bad luck, so it’s really hard for them to get jobs, so they’ve got no chance. Because they’re seen to be dirty they can’t get certain jobs. They can’t go to certain festivals because they’re seen to be unholy and tainted. There’s a lot of complex stuff going on that it takes a long time to get your head around” says Suzy.

Reaching Out to Nepalese Widows

Suzy with Narayani Acharya whose son's education is being sponsored by MUTU Nepal.With her friend James Bettney, Suzy founded Mutu Nepal, a charity seeking to help Nepalese widows and their families. Suzy and James were already friends before they realised that they were both working on projects with Nepalese widows, Suzy in charity, and James through photography. The pair were both working in Nepal and decided to join forces:

“It was kind of annoying because James had just got there and I was at the end of my trip, so couldn’t help him as much –  and obviously I had all these contacts. But I was able to spend four or five days with him ‘widow hunting’, trying to find widows to take photos of and interview.” Suzy says.

After graduating from Glasgow University and Glasgow School of Art in 2011, Suzy and James formed Mutu.

The initial aims of Mutu, which means “heart” in Nepalese, are to set up self-sustaining projects that can run, whilst Suzy and James pursue their other ventures.

“James and I are looking to see if there’s an opportunity to give the widows some money to start their own business, or something. Whether that would be to buy a sewing machine, or if a widow wants to start a shoe repairing business, we can look into that. We’re also trying to sell products here that the widows make.”

Contaminated Water Just One Problem Amongst Many

Despite having been to Nepal three times and studying the country for many years, Suzy is still deeply affected by what she sees there.

“There was a little boy that we became friends with in a village. When we went back the next year we asked where Santosh was, but Santosh wasn’t there because he died of typhoid.”

Contaminated water is just one amongst a plethora of problems facing Nepal that 24-year-old Suzy wants to address:

“It costs about one pound to get the drugs for typhoid. Because he couldn’t afford it, they put him off getting treatment until it got too far, and then he ended up taking the treatment. But it was too late and he died. And had to watch his mum die, and it’s one of the most horrific deaths you can imagine.” 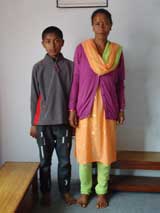 Purna Kumari with her son, Niraj.The hardships involved in travelling and working in Nepal have done nothing to put Suzy off her work. “Sometimes it can be tough when you’re out there, I’ve had chest infections, stomach infections, but I still think every time I go, I love it a bit more. It’s amazing to get out there and see where the money is going.”

On her latest trip to Nepal, Suzy was setting up the building of a chhahari in Kathmandu.

“A chhahari is like a safehouse, and they also have production facilities there. It’ll have a conference hall, a place for the women to meet, and a training centre.

"They’ve been joking and saying there will be a room called the Suzy and James room. It was lucky I went when I went, because they were needing that extra push to pursue this. They said ‘if you hadn’t come here and pushed us, we might not have done it,’ so I felt like we made a difference that way.”

Suzy has completed an undergraduate and postgraduate degree, with both her dissertations focusing on Nepalese widows, and is about to begin a PhD on the same topic. For someone so passionate about the subject, it’s no surprise she is already thinking of the next project,

“We’d love to put them [chhaharis] up all over the place. There’s only two official chhaharis at the moment, and this will be the third, but there are 75 districts in Nepal. It would be great if we could have one in every district, but one step at a time.”

Whilst being aware of the restrictions of trying to run a charity in Asia, at the same time as studying for a PhD in London, Suzy is hopeful Mutu can work to end the poverty cycle, and challenge deeply ingrained social prejudices.

Suzy with Sharaswati Shrestha, one of the widows being interviewed for research on poverty experienced by widows and how widowhood perpetuated poverty. MUTU Nepal hopes to understand more about the issues facing widows so that it can better help widows to tackle problems like poverty.Suzy’s interest in Hindi widows was inspired by the Unreported World documentary “The Living Dead”. She then went on to research the subject for the geography half of her undergraduate degree. The other half was business management, the split in pursuits reflected in the highly practical way she can discuss such emotive issues.

Growing up in her parents’ hotel instilled a caring attitude in Suzy from a young age. She also helped look after her older brother Chris, who suffers from bifida, hydrocephalus (build up of fluid in the brain), epilepsy, and associated learning difficulties.

She doesn’t, though, see her caring side as a motherly attribute, or as factor that makes her empathize with the widows:

“I’m inspired by inspirational women and the widows are in a country where it’s very difficult to be strong, and you have to fight for anything you want.”

“Inspirational women” is a term used so often these days; it has almost become clichéd, but it’s hard not to feel that is has slightly more depth when Suzy uses it, than when it gets tagged to Kelly Rowland or Cheryl Cole.

Suzy and James hope to start a cultural transformation that will take many years to manifest.

For the moment though, Suzy is realistic about what Mutu can achieve, “We might not change the world, but we can make a small difference.”

Nepal is a predominantly Hindu region, and the caste system is a feature of society.

Dalits ('untouchables') rarely get a justifiable wage for their labour. Those working in Haliya Pratha (bonded labour) or Khala Pratha (forced labour) do not earn from thehir work. They may receive food grains.

Dalit women tend to suffer much more than Dalit men, and get a lesser wage.