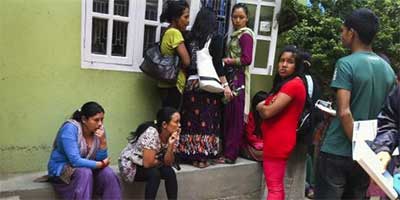 Although some champion the evolution of gender roles as men take on domestic duties, some social workers say the absence of mothers negatively affects children.

Bir Bahadur Harijan, 50, decided to work abroad in Qatar, a Persian Gulf country, after it became too difficult to financially support his family of four. He did not own any land for growing crops in Chitwan, a district in central Nepal, and did not earn enough farming other people’s paddy and corn, he says. “I wanted to work in Qatar as a construction laborer, and I had my passport with all necessary papers ready,” he says. “But the local recruiting agency told me that I couldn’t work because of my age and returned my papers.”

But the family needed money somehow, he says. So instead, his 30-year-old wife decided to work abroad in 2011 as a child caretaker.

“Faced with such dire problems, a friend of my wife told us that she could get a good salary working as a child care worker in Kuala Lumpur, Malaysia,” Harijan says. “That is why I sent my wife there, along with her friend.”

She went abroad on a three-year contract, he says.

“If I had a choice, I wouldn’t have sent my wife that far for work,” he says. “I was forced to do so for the family.”

At first, Harijan was nervous about sending his wife abroad for work because he had heard about cases of abuse, he says.

“I have heard that some female migrant workers have been tortured, some have been sexually exploited and some forced to work long hours,” he says. “To hear all such information through the women returnees and through the local television channels, my heart aches with sad feelings of apprehension.”

But his wife’s employers treat her well, he says.

“I get relief when my wife says that she has a pretty decent job, which is not so tough,” Harijan says.

Although the family had to mortgage their house and borrow 45,000 rupees ($500) for her employment documentation and airfare, they earn much more now, he says.

They have big plans for a future business and for their 13-year-old twins’ education, who are in the sixth grade at a nearby government school, Harijan says.

“When she returns, we will start a small restaurant at a suitable location nearby, as she wished so, and also send our children to a very good school in Kathmandu with a view to make them very successful persons someday,” he says.

But when she returns, the family will also have to re-evaluate gender roles.

Because Harijan is unemployed and his wife is working abroad, he does most of the household chores his wife would normally do, he says. But it is uncommon for men locally to perform domestic duties, so he faces scrutiny from the community.

He says he feels bad when his neighbors talk behind his back. But he depends on his wife’s earnings to support their family.

“I do not have any other option,” he says. “There aren’t any decent jobs here. Sometimes I wish I could have gone instead of her.”

Nepalese women are increasingly working abroad. Poverty and unemployment push women to look for work outside Nepal so they can send money home, which in turn helps to build the country’s economy. But community members debate the effect of women working abroad on the family. Although some tout evolving gender roles as husbands take on domestic duties, others worry about the effect of absent mothers on children.

Although the majority of migrant workers who leave Nepal to work abroad are men, there has been a steady increase in the number of female migrant workers, Sitaula says.

The number of females the government legally allowed to leave Nepal to work abroad more than doubled during the past two years, from more than 10,400 in the 2010 to 2011 fiscal year to nearly 22,950 in the following fiscal year, according to the Department of Foreign Employment.

An estimated 2.5 million Nepalese women work abroad legally and illegally, according to the Women’s Rehabilitation Centre, an organization that promotes and protects human rights in Nepal.

“In recent years, better job opportunities have come up abroad for women,” he says. “And the perception that foreign employment results only in sexual and domestic violence is changing. Our manpower recruitment agency alone has sent over 300 women for foreign employment abroad this year.”

Various factors push and pull women to work abroad, says Anjana Vaidhya, program associate of UN Women, a U.N. organization that works for the rights of female migrant workers as part of its campaign for gender equality and women’s empowerment. Families look for work outside Nepal because of poverty and unemployment, and stories of neighbors’ successes with foreign employment encourage them.

“Nepalese women who face poverty and unemployment as a harsh reality of life feel that foreign employment has also been a good help to the country,” she says in a phone interview.

But women’s work abroad does not just affect the economy. Family dynamics in Nepal also shift, with community members citing both positive and negative changes.

Some highlight the evolution of gender roles, as men take on more domestic duties.

“In a male-dominated society like ours, women were confined to household chores and looking after the children,” he says. “In the past, it wasn’t permitted for women to work outside the house.”

But foreign employment has liberated women from this role, Nepal says.

“Lately, women have started going abroad for employment,” he says. “The role of a husband in the family has changed over the past few years.”

“At the same time, by working abroad, women are earning money in order to look after the family,” Nepal says.

Rameshwor Sunuwar does many of the household duties since his wife left their home in Lalitpur to go abroad as a domestic worker. But the exchange is worth it because their family now makes more money, he says.

Sunuwar and his wife struggled for years to support their two daughters, who study in the sixth and fourth grades. He lost his driving job after a car accident in 2009 permanently disabled his right foot.

His wife went to Kuwait in 2011 and sends about 30,000 rupees ($330) every two months, he says. They finished repaying the loan of 60,000 rupees ($660) that covered the cost of her foreign employment documentation and placement. They now plan to send their daughters to a boarding school and to open a small business.

“Thanks to my wife’s remittance money earned through hard work abroad, our family is now out of the day-to-day struggle for mere subsistence,” Sunuwar says with a smile. “I think our bad days are over.”

“The trend of women migration for employment adversely affects the children most,” he says. “Due to the mothers’ stay abroad for a long period, their children are deprived of motherly love and care, which adversely affects them psychologically, as well. Infants in particular suffer the most through lack of their mothers’ milk.”

Sunuwar’s daughter, Kaushila Sunuwar, 13, says that she wishes her mother were home.

“Mothers of my friends feed them and make them ready for the school,” she says. “But, as my mother is working abroad, I have to help my father to cook food, make my sister and myself ready with dresses and other essentials for the school. I wish my mother were here too, like everyone else’s.”

“It is certainly a courageous task and a big leap forward,” he says.