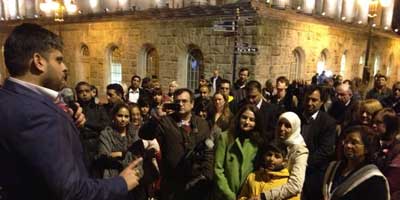 Two hundred people, including Muslims, Sikhs, Hindus and Christians, held a vigil for brave Taliban gun victim Malala Yousufzai in the UK, outside the hospital where the Pakistani rights activist is being treated.

The vigil was held on Saturday, 20th October, outside the Queen Elizabeth Hospital in Birmingham, and included speeches from councillors, religious leaders and women's rights groups.

Councillor Waseem Zaffar, who helped to organise the vigil, said: "Malala is an inspiration and we hope she can act as a positive role model to young girls in fighting gender inequality."

Members of the Muslim, Sikh, Hindu and Christian communities gathered outside the hospital and held the vigil praying for Malala's speedy recovery.

Thousands of messages of support have been flooding in to the hospital from well-wishers.

On Wednesday, 9th October, Taliban militants shot at Malala in the head and neck when she was returning from school.

Two of her classmates were also injured in the attack.

Related Article: Girl shot with Malala: Memory of attack 'still in my head'

The shooting was related to Malala's activities to promote girls' education in the Swat valley, near the Pakistan-Afghanistan border.

Malala was brought in an air ambulance to Birmingham on October 15th, as specialists at the Queen Elizabeth Hospital are considered among the best in the world at treating the kind of injuries she has sustained.

Related Article: Our Daughter Stands for Peace and Education

Petition: Protect the Children and Schools in Northern Pakistan

Updates regarding the wellbeing and care of Malala

Cards and donations for Malala