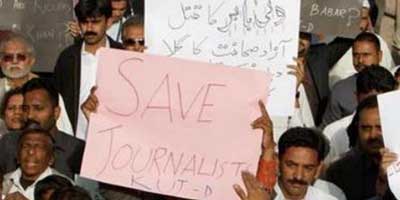 Eighty eight journalists have been killed in Pakistan during the last decade, out of which 36 were shot dead in target killings. In 2012, ten journalists including one TV channel driver were killed in three provinces, Balochistan, Sindh and Khyber Pakhtunkhwa of the country as impunity against Pakistani media rises to unacceptable levels. According to the figures compiled by the Rural Media Network Pakistan (RMNP) twenty six journalists have been killed in Balochistan province during last five years which Khuzdar district had been declared as one of the dangerous place for working journalist by the Reporters without Borders (RSF).Up to November 18, this year four journalists were shot dead in Balochistan province.

The biggest challenge apart from direct threat to the life of journalists in Pakistan is a culture of impunity. The killers of not a single of the 88 journalists killed in Pakistan excluding US journalist Daniel Pearl have been arrested, tried and convicted. This promoted impunity and allowed anyone to threaten and target journalists because they know they can get away with murder. Journalists often complain about receiving threats, including from the country's intelligence agencies which can lead to violent attacks against them. Investigations, when commissioned, tend to lack credibility and recent case of GEO TV channel reporter Wali Khan Baber who was shot dead in Karachi in January, 2011, saw the murder of all six witnesses who were willing to testify against the five dependants.

The areas bordering Afghanistan-FATA Khyber Pakhtunkhwa and Balochistan are the most dangerous areas for journalists. Journalists hailing from Balochistan province face violence and threats from ethnic, sectarian and separatist groups as well as from security forces and intelligence agencies. Tribal leaders, militants ,district administrations, political agents and security agencies ask journalists in FATA, Balochistan and Khyber Pakhtunkhwa to get clearance from them before filing their news to both print and electronic media.

The situation in the country's biggest Punjab province is not any better, where a young female journalist Seemab bibi committed suicide by jumping from the fourth storey of a hotel in provincial capital Lahore on August 15 this year over nonpayment of her several months salary while many anchorpersons and senior journalists were threatened by law enforcement and intelligence agencies.Similarly in small towns a large number of journalists were detained, injured, threatened and implicated in false cases on their reporting.

South Punjab 'in the grip of extremism'

South Punjab, a home of 50 million people is in the grip of religious extremism and sectarian violence nowadays. Law enforcement agencies have arrested dangerous terrorists from various areas of South Punjab who are activists of banned religious organizations including their mastermind a PHD degree holder. Suicide jackets, hand grenades, mine, and explosive material in heavy quantity was also recovered from an area seven kilometers away where RMNP is based. This situation demands strict safety precautions from media men. They put their life in danger to cover different assignments. Religious extremism is spreading in different parts of the country. There are many sectarian organizations fighting for domination. Former Bahawalpur province is a part of South Punjab where militants have strong base. Religious extremists force journalists to cover their speeches and pressurize them to publish their news word by word. Recently a man was burnt alive in Chanigoth town of Bahawalpur province whereTV channels reporters received threatening messages from extremists on cell phones. Rural journalists in various parts of former Bahawalpur province and feudal dominated areas of South Punjab face three major problems and put their life in danger while they report on sectarian extremism, honor killings and corruption of feudals and government functionaries.

Lack of Security for Media Personnel

The security of the media persons remained a big question during the eleven months of 2012, and no proper steps have been taken to provide security by the authorities and even by the media houses. The attitude of media houses was more indifferent towards the safety and security of journalists as compare with the authorities. The journalists who are involved in their professional duties in the conflict areas are more vulnerable and exposed before the law enforcement agencies, militant groups and other non state actors. The majority of the journalists are under paid or allowed only to use ID cards of the channels they work for and have to arrange their own earnings.

Article 19 of the constitution of Pakistan guarantees that every citizen shall have the right to freedom of speech and expression, and there shall be freedom of press. RMNP urges the authorities to stop the impunity to the perpetrators who are involved in killings, abduction and disappearances of the journalists, attacks on journalists and media houses. The non committal and indifferent attitude of federal and provincial governments towards the killings of journalists has provided encouragement to the powerful groups to unleash against the journalists to suppress the freedom of expression and freedom of media. The killings of journalists and continuous attacks on them shows that policy of the civilian government towards the freedom of media and expression is no more different from the military rule and it may be called as extension of the policy of military dictators.

About AHRC: The Asian Human Rights Commission is a regional non-governmental organisation that monitors human rights in Asia, documents violations and advocates for justice and institutional reform to ensure the protection and promotion of these rights. The Hong Kong-based group was founded in 1984.