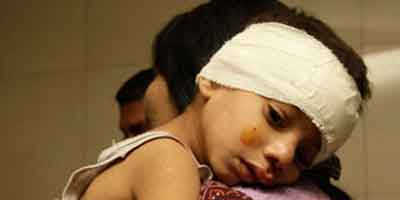 A Pakistani mother holds her injured child at a local hospital in Karachi, Pakistan after two bombs exploded outside a mosque, killing scores of people and wounding others in a suicide attack on the 21st November 2012. Photo: Fareed Khan, AP

A Statement from the Asian Human Rights Commission - Nov 2012

PAKISTAN: The people live in terror not knowing whether they will survive to see another day

Daily life in Pakistan is today marred by terrorist attacks that range from bombings to shootings and execution-style killings. All these are taking place in an environment where the law enforcement agencies are helpless to intervene. Little in the way of investigation takes place and even when the identities of the perpetrators are known no arrests are made.

While the majority of the terrorists are members of Talibani and its various groups the others are from ethnic, nationalist and Islamic organisations. They make up the same numbers as those of the Taliban and as a result of this the most common smell on the streets of Pakistan is that of gunpowder and cordite. The sounds of gunshots, automatic fire and explosions are interspersed with the cries and shouts of the people and heart rending screams of the surviving family members. It is not overly dramatic to say that few people know whether they or their loved ones will see the dawn of another day. Parents keep the image of their school-going children in their minds while in their hands they hold their mobile phones, constantly fearing the call that will bring them bad news. No one who has to leave their homes for work or family business knows whether he or she will be the victim of a stray bullet or a suicide bomber.

The most productive industry in the country is the manufacturing of the explosives used by the suicide bombers and this industry is financed by donations from vested interests abroad, sections of the military and high ranking officials of the government. Apart from the physical bombs themselves the suicide bombers are being 'manufactured' at a similar rate. This is thanks to the religious extremists that spread their messages of hate from the very mosques that are supposed to be spreading the own type of religious peace.

What space remains is filled by the ethnic and nationalist groups where the reason for the violence they perpetrate is not based on religious extremism but that of their own agenda; whether it is for a 'homeland' or sovereignty and self-rule.

The death of innocent citizens is the result of the actions of all these groups, regardless of the ideals they are fighting for.

Pakistan has released a group of nine Talibani from prison in the hope that they will assist in peace negotiations. This was done after one of their own senior intelligence officers said that he was skeptical the released Taliban prisoners will be effective in peace negotiations due to generational conflicts. The same officer went on to say that more such releases are likely. Many of the freed prisoners were ranking member of the Taliban. "I doubt very much that the current Afghan Taliban will listen to these has-beens."

So what has been accomplished by this release? News of a string of bombings in the country would indicate that no progress has been made whatsoever.

The Pakistani Taliban has claimed responsibility for a series of bombings throughout the country that has left dozens dead. Particularly, targeted were Shiite Muslims that had gathered for a revered religious mourning period. It is reported that over 30 people have died and many have been injured in the bombings that took place on Wednesday, November 21.

The deadliest attack took place in Rawalpindi where a suicide bomber joined a Shiite procession. The resulting blast killed 23 people and wounded 35. In another attack, also on the Shiite community in Karachi, two people were killed in a double-bombing. Bombings also took place in Shangla and Quetta.

Moving outside of the country, the Pakistani Taliban have threatened India following the execution by hanging of the Mumbai attacker, Mohammed Ajmal Kasab, the sole survivor of the team that carried out the 2008 terrorist attacks that killed more than 160 people.

For the government of President Asif Ali Zardari to turn a blind eye to the activities of the Taliban in its own country is one thing but to allow them to attack another nation while giving them safe haven is something else. India would have every right to take action against these terrorists even if it meant denying the sovereignty of a neighbouring nation. American drone attacks might soon become the very least of Pakistan's problems.

The question that urgently needs to be raised is as to why the government of Pakistan is not doing anything to stop this violence. The police and other law enforcement agencies hold investigations into the acts of violence but no positive results are ever forthcoming. As mentioned above even when the perpetrators are positively identified they are either given impunity by high ranking officials or judicial officers who do not want to get involved in anything connected to terrorists or are left to roam free by officials that secretly believe in their cause.

In Pakistan the meaning of the word 'justice' translates as "How do we save our own skin. How do we pretend to do our jobs without appearing to be humble servants of the terrorists and extremists?" This is borne out by the fact that thousands of terrorists have been arrested but few of them spend more than a few days in custody as they are either released or bailed out, never to be seen again. The death sentence is handed down to criminals for heinous crimes and there are 8,000 people on death row, but significantly not one of them is a Talibani. The standard excuse by the courts is that the prosecution has not made its case. Alternatively, in cases where the government has a vested interest evidence is even collected from newspaper reports. Where then, is the rule of law?

The Asian Human Rights Commission urges the government of Pakistan to be more realistic and take the lead in curbing the menace of terrorism. If it cannot rely on the police, other law enforcement agencies and the military, all of which have sworn to protect the country, then it must look for other avenues. To start with it must look within. It must make firm decisions in parliament to rein in the military, reinforce the law enforcement agencies so that they are no longer lapdogs of the armed forces and protect the judiciary so that they are able to make orders that will not result in the judges either being killed or forced to leave the country.

The Asian Human Rights Commission is a regional non-governmental organisation that monitors human rights in Asia, documents violations and advocates for justice and institutional reform to ensure the protection and promotion of these rights. The Hong Kong-based group was founded in 1984.