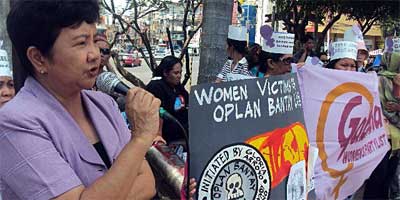 Women legislators of Gabriela Women’s Party have denounced anew the Benigno Aquino administration for signing into law a measure that criminalizes women forced into exploitative situations by poverty.

It is the consolidated version of Senate Bill 2726 and House Bill 493, which decriminalizes all forms of vagrancy and effectively repealed the law on vagrancy – a law widely criticized as being anti-poor. The amended law, however, declared that prostitution – an outcome of vagrancy – is a crime. It was submitted to Aquino last March 7, 2012 and signed into law on April 7.

“The administration is perpetuating the archaic view contained in Article 202 of the Revised Penal Code, but, at the same time, it allows the exploiters of women and those who earn from their exploitation to go scott-free,” De Jesus said.

SECTION 1. Article 202 of the Revised Penal Code was amended to read as follows:

“Article 202. Prostitutes; Penalty. – For the purposes of this article, women who, for money or profit, habitually indulge in sexual intercourse or lascivious conduct, are deemed to be prostitutes.

“Any person found guilty of any of the offenses covered by this article shall be punished by arresto menor or a fine not exceeding 200 pesos, and in case of recidivism, by arresto mayor in its medium period to prision correctional in its minimum period or a fine ranging from 200 to 2,000 pesos, or both, in the discretion of the court.”
Originally, the now amended provision previously read:

Art. 202. Vagrants and prostitutes; penalty. — The following are vagrants:

1. Any person having no apparent means of subsistence, who has the physical ability to work and who neglects to apply himself or herself to some lawful calling;

2. Any person found loitering about public or semi-public buildings or places or tramping or wandering about the country or the streets without visible means of support;

3. Any idle or dissolute person who lodges in houses of ill fame; ruffians or pimps and those who habitually associate with prostitutes;

4. Any person who, not being included in the provisions of other articles of this Code, shall be found loitering in any inhabited or uninhabited place belonging to another without any lawful or justifiable purpose;

For the purposes of this article, women who, for money or profit, habitually indulge in sexual intercourse or lascivious conduct, are deemed to be prostitutes.

Any person found guilty of any of the offenses covered by this articles shall be punished by arresto menor or a fine not exceeding 200 pesos, and in case of recidivism, by arresto mayor in its medium period to prision correccional in its minimum period or a fine ranging from 200 to 2,000 pesos, or both, in the discretion of the court.

Violation against the Magna Carta of Women

The Gabriela lawwmakers had earlier called on Aquino to veto the bill, saying that it violates the Magna Carta of Women. De Jesus stressed that treating prostituted women as criminals is a clear violation of their right to be protected from abuse and violence, a government responsibility which Aquino totally abandoned with the signing of the law.

“The law is very anti-women and anti-poor because it directs the claws of the law toward the victims instead of the pimps and customers and all those who profit from prostitution. Poverty is the crime that makes women vulnerable to prostitution, trafficking, slavery and abuse. The societal system that perpetuates poverty should be the one arrested, and not the women and children who are its victims,” she said. “Here is a President who, instead of ensuring programs that will protect the victims and ensure their social reintegration, further aggravated their situation by calling them criminals. By doing so, he is the modern-day Pontius Pilate out to crucify prostituted women to the cross of oppression.”

A blow against women’s rights

For her part, Ilagan said that in the amended law, pimps are no longer considered vagrants and will no longer suffer penalties for their acts while prostituted women are still considered criminals.

Ilagan explained that the amended law also directly runs counter to the Anti Trafficking in Persons Act, which views prostituted women as victims and not as criminals.

“The amended law turns a blind eye to the realities of poverty and unemployment that heightens women’s vulnerability to trafficking, prostitution and slavery. It is poverty that forces women to desperately engage in prostitution and subject themselves to conditions of abuse,” said Ilagan.

Ilagan said that the passage of the new law was a blow against decades of struggle to uphold gender equality and women’s rights.
“It hits the proverbial nail on the cross which many a Filipino woman has sought to rid herself of. Having worked for this very struggle as a lawyer, such harrowing news only makes me push this struggle even further,” she said.

In the meantime, a lawyer for urban poor concerns in Ateneo University also decried the passage of the amended law.

“After an initial reading of RA 10158, I thought its Section 1 was just a typo or some glaring clerical error.My further investigation belied such wishful thinking. After reading the Senate bills behind RA 10158, I learned that out of the three Senate bills filed, two bills – the Estrada (Senate Bill No. 915) and Legarda (SB No. 1423) versions – wanted to retain prostitutes as criminals. This can be seen through their use in the titles of the phrase ‘An Act Decriminalizing Certain Act of Vagrancy’ which meant the two Senate bills decriminalized all other vagrants, except for prostitutes,” said Michael Gaddi.

Gaddi explained that Sen. Francis Escudero’s version (SB No. 2367) on the other hand, sought to decriminalize all vagrants – prostitutes included – for it did not make any qualifications and used the phrase ‘An Act Decriminalizing Vagrancy ‘in its title and that Escudero was for the repeal of Article 202 in its entirety.

“What baffled me was when all these three Senate bills were consolidated into what’s known as a substitute bill (SB No. 2726), Escudero’s version had dissipated and SB No. 2726 slipped into passage as RA 10158. Some legislative wizardry perhaps? Legislative wizardry notwithstanding, RA 10158 is clearly peppered with so many legal impediments,” he said.

The lawyer questioned how legislators seemingly ignored that the amended law violated (a) The 1987 Philippine Constitution’s provisions on Women and Nation Building clearly seek to uplift women from being a marginalized sector to an empowered workforce whose contributions to nation building shall be valued and who shall not be discriminated against; and (b) The Convention on the Elimination of all forms of Discrimination Against Women (CEDAW), “an international treaty which by its title alone, needs no further explanation,” he said.

So why punish them in the first place?

Furthermore, RA 9710’s Implementing Rules and Regulations mandates the executive and legislative bodies to amend or repeal discriminatory laws or provisions of law – among which is Article 202 of the Revised Penal Code on the definition of vagrants and prostitution. I could go on endlessly on how RA 10158 smacks of discriminatory legislation and how patently unconstitutional it is.

I just fervently hope that all those decades of struggle to uphold gender equality and women’s rights would not evaporate into legal limbo,” he said.

Women’s role in Philippine society has been shaped, by and large, by the Filipina’s demand for social justice, equality, freedom and democracy. That yearning and her consequent struggle have had a long and glorious, albeit invisible, history.

In 1984, fuelled by the resistance against the Marcos dictatorship and an overwhelming need for significant economic and political change in the archipelago, women from all walks of life – worker, peasant, urban poor, indigenous, middle class, artist, religious – banded together to set up a national women’s coalition. They took the name of the 18th century woman general. They called their coalition GABRIELA.

Founded on October 28,2000, Gabriela Women’s Party is an offshoot of the biggest alliance of women’s organizations in the Philippines, GABRIELA.

Rich with experiences and lessons of having been at the forefront of the Philippine women’s movement in its over 20 years of existence, GABRIELA first joined the electoral arena in 2001 when it fielded then Secretary General, Liza Largoza Maza to run as partylist representative under Bayan Muna (People First) Party.

Following its successful foray in parliament with the passage of pro-women legislation including the anti-Trafficking in Persons Act and the Anti-Violence Against Women and Children Act in the 12th Congress, Gabriela Women’s Party fielded its nominees in the 2004 national partylist elections for the first time. Gabriela Women’s Party emerged 7th of 66 parties, garnering enough votes to have Hon. Liza Maza serve as the sole women’s sectoral representative in the 13th Congress.

Today, with over 100,000 members in 15 regions in the Philippines and Filipino communities abroad, Gabriela Women’s Party through grassroots organizing, education, services, various campaigns and legislative efforts continues to advance the rights of women, children and country.