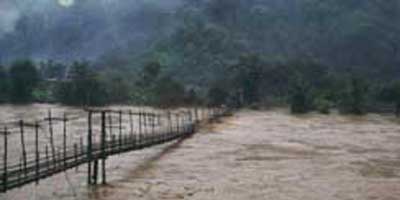 Since early August 2011, heavy rain resulted to severe flooding in over 36 provinces in Thailand.

Over 10,000 people in two of the four refugee camps in Mae Hong Son Province where WEAVE works were severely affected by the heavy rain and flood.

In August 2011, Mae Ra Moo was badly hit resulting to the loss of over 15 million Thai Baht food and non-food items, including school buildings, equipment, and materials.

In September, Karenni Site2, Ban Mae Surin was submerged in water, cutting all transportation links and access when 2 major bridges were totally destroyed by the fierce river water.

Many families became homeless and considerable numbers of houses were destroyed by the landslides.

Many families had to be evacuated/moved to safer grounds. As the road to Camp 2 become impassable, bringing food supplies to camp is one of the main problems.

Patients carried for 4 hours to hospital

According to our partner, the Karenni Further Studies Program (KnFSP), "patients had to be carried on foot to the next village (4 hours walk) to seek medical attention in MHS hospital".

Currently, all schools are closed.