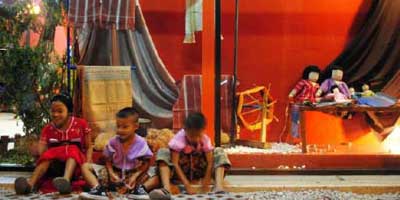 "WEAVE supported us when nobody wanted to help us. WEAVE trusted us and helped us grow. WEAVE’s Fair Trade has definitely helped our families and communities.

Personally, the WEAVE handicraft project allowed me to earn a safe and regular income by doing embroidery work. It has not only provided me and my family with the much needed nutritious food and get my children to go to school, but above all, it allowed me to regain my self-worth and self-confidence."

Muga Pado (Big Aunty, literally, in the Karen language) is Karen by ethnicity. and has been one of the pioneer embroiderers of WEAVE’s handicraft project. 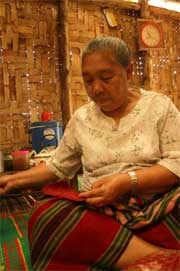 Muga Pado’s family  escaped to Thailand in 1990 from the human rights atrocities perpetrated by the Burmese military junta.

As displaced persons and without a government to turn to, Muga Pado and her family have to depend to international humanitarian organizations in order to survive.

In 1996, the Huay Kaloke refugee camp in Thailand was burned down, and all 700 houses were destroyed, which prompted  Women’s Education for Advancement and Empowerment (WEAVE) to accelerate its Women’s Income Generation Program through the production of Karen handicrafts.

Since then, Muga Pado  not only became an embroiderer, but became an active and highly committed quality leader –  and living WEAVE’s mission of providing safe income to many Karen refugee women in Umpiem Mai camp on the Thai-Burma Border.

WEAVE’s accomplishments in 2011 focused on refugee women and children on the Thai-Burma border. 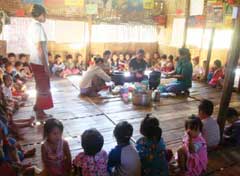 There are over 3,000 nursery school children in the WEAVE assisted nursery schools in the 2 Karenni refugee camps on the Thai-Burma border.

WEAVE supported over 3,000 nursery school children (ages 2.8 to 5 years old) in 25 nursery schools on the Thai-Burma border. According to the teacher’s reports,  children generally are growing healthy and socially active.

Last December 9, 2011, WEAVE launched  the Children’s Book during the Festivals in Burma. The event was highlighted with presentations on various ethnic Burmese dances, music, and food as well as ethnic fashion shows.

It also featured a storytelling portion to nursery school kids.

Over 180 women refugee artisans are receiving regular safe employment under WEAVE’s handicrafts project and are able to supplement their family’s food requirements. 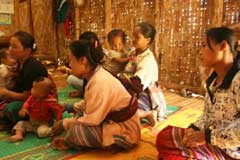 Women refugee artisans create beautiful handicrafts which in turn provide them with regular and safe employment.

Also, more than 30 producer organizations are involved in the FairTrade Shop, a WEAVE and Thai Tribal Craft’s collective marketing space in Northern Thailand. An estimated 3,000 local artisans are able to regularly benefit from this collective.

WEAVE's Livelihoods Learning and Linking Event  was held for over 30 income-generating practitioners from Burma  and Thailand on December 6 to 8, 2011, at our Fair Trade shop in Mae Sod, Thailand. The event  provided a space for livelihood practitioners to share best practices, and also, a platform for networking. 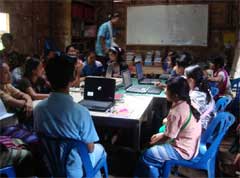 WEAVE has supported the education of 25 young Karenni women ages 16 to 32 years, who enrolled in the Women's Study Program. The young women are learning Peace Education, Community Development and Women Issues and Development.

These activities have continued to strengthen WEAVE’s leading role in children's learning and women’s capacity development towards economic self-reliance on the Thai-Burma border. 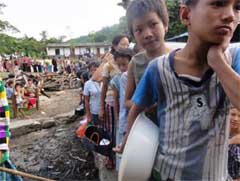 The year 2011 was quite challenging to WEAVE and caused a lot of instability in our staff and constituencies on the Thai-Burma border.

In July, the ceasefire agreement between the Burmese military government and the ethnic Kachin Independent Organization collapsed –  which resulted in the resumption of fighting and internal displacement of over 65,000 in the towns bordering Burma-China.

The food crisis in Kachin State was high, from July to December. Fortunately, aid agencies –  including the United Nations, are now permitted to deliver humanitarian aid.

However, those who are displaced in the deep jungles of Burma (Kachin State) are still without food, shelter and medicines. Moreover, the Kachin Women’s Association in Thailand reported that rape to women in IDP (internally displacement) by Burmese military is still going on.

In September, the flooding in Northern Thailand – including the areas where WEAVE operates (refugee camps), has destroyed many people’s lives, properties, and livelihoods.

WEAVE is a women's organization and has accompanied refugee and displaced women from Burma in the last 21 years to live life with dignity. IN 2010, WEAVE became officially registered as a Thai Foundation in Thailand. WEAVE was a Fair Trade Federation member from 1997 to 2008 and became member at the World Fair Trade Organization since 2009.