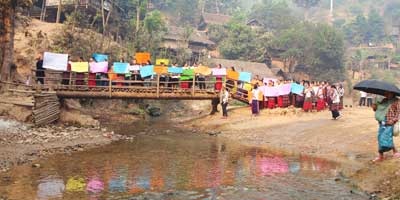 Burmese refugees in Thailand face a stark choice: they can stay in one of the refugee camps along the border with Burma and be relatively protected from arrest and summary removal to Burma without freedom to move or work. Or, they can live and work outside the camps, but typically without recognised legal status of any kind, leaving them at risk of arrest and deportation. (Human Rights Watch)

Grassroots NGO, WEAVE, began its journey in 1990 to address the influx of Burmese coming into Thailand two years after the student uprising in Burma. More than 20 years later, WEAVE is still operating in refugee camps alongside the Thai-Burma border, providing women and children with vital services such as education and income support.

WEAVE stands for Women's Education for Advancement and Empowerment.

Mitos Urgel has been the executive director of WEAVE since 2003.  I asked Mitos about WEAVE's work in the refugee camps, and how people can help.

For WEAVE, navigating around Thailand’s refugee policies is a challenging one. Thailand is not a party to the United Nations 1951 Refugee Convention or its 1967 protocol. Without a clear stance on what a refugee is, the rights of a refugee, or the responsibilities of the host nation that has granted the refugee asylum.

Furthermore, it is very difficult for agencies such as the UNHCR to carry out their duties.  Mitos explained:

In light of this, the journey hasn’t been an easy one. WEAVE started as a non-legal entity working within the refugee camps. Whilst the Burmese were hiding from an oppressive governmental regime, WEAVE spent much of their time hiding from Thai government authorities.

It was only in the last two years that it gained status as a foundation in Thailand, allowing them to work with a real identity in the refugee camps. What’s more extraordinary is that WEAVE operates using only 18-19 staff between six to seven offices. Mitos is the only expatriate.

The Thai government denies the Burmese income generation. However, for WEAVE, Mitos said,

“When the organisation was founded in 1990, income generation was one of the major concerns of the organisation. Because the moment women go out to look for money, their vulnerability is further increased”. 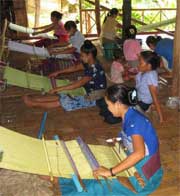 The reality is that many Burmese women will experience abuse and exploitation if they leave the refugee camps in search of work to support their families. WEAVE understood the importance of safe income generation and subsequently established a program that allowed the refugee women to generate safe employment.

A member of the FairTrade Federation in the US since 1997, WEAVE is not legally allowed to sell products in Thailand. However, the WEAVE online shop avoids this by selling overseas.

The hand-woven handicrafts made by the women living in the refugee camps are for many, their sole source of income. From scarves, to placemats, it’s hard to imagine that these beautiful items were created under such terrible circumstances. There is both a website and a Facebook page from which you can access the products.

Funding cuts have also made it significantly harder for WEAVE to provide some of their services including the number of teachers they have for educational programs.

“We are also looking for human resources –  human capital, so we encourage individuals interested in volunteering.” Mitos said.

Donations to support the teachers are also embraced. They are also on the lookout for partnerships with organisations such as the ‘Global Goods Network.’ These partnerships provide support for initiatives including the ‘Give a Doll’ project, or assist in providing the refugee children with educational materials such as textbooks and pencils. There are many ways the public can assist WEAVE in their mission be it via donating to a program, or volunteering to be a part of a program.

But what sort of programmes does WEAVE exactly provide?

WEAVE’s most impressive feat is its many educational programs.

In the beginning, very few NGO’s provided educational services for the refugees on the Thai-Burma border. WEAVE sought to address this and thus, the Early Childhood Program was created:

“We support to over 4,000 preschool children. We believe that early childhood [education] will set for the future development of a person. And so we provide access to this opportunity for young kids, including children with special learning needs.”

Children under 5 years old are taught using a mother tongue-based approach, learning their own language.  A Supplementary Feeding Program is also provided to combat the malnutrition that many of these children face in the camps. WEAVE additionally supports over 30 nursery schools both within the camps and in displaced areas of Burma. In this instance, community leaders train the teachers. Mitos said that this training program has “supported over 300 ethnic minority teachers.”

In addition, a Child Development Program also gives children access to learning centres from 9 to 4. Parent Education is also essential within the camps as many parents are non-literate. Thus, WEAVE provides them with education on child’s rights, child behaviour, child psychology, and child development.

What Happens When Education Stops?

A major issue in the camps is that education is often discontinued after high school.

Previously this has led to high rates of psychosocial problems including teenage pregnancy.

Because of this, WEAVE has a Women’s Study Program that provides education to girls, generally between the ages of 15 to 21 years of age who have fallen pregnant at some point, couldn’t continue their education, but are interested in learning about women’s issues.

“So we have a 10-month program for these young girls. And the hope is that they’ll be able to learn life skills so that they will be well prepared to make wise decisions in future but also hoping that they can become future community leaders –  women community leaders.”

On the other hand, WEAVE’s Further Studies Program is a 2-year education program provided for those children interested in studying some form of higher education. They are provided with English skills and then matched up with an organisation outside of the country that provides them with a scholarship. Mitos spoke of two young students who have recently left for Canada under the World University Service.

Additionally, there is a program for senior women in the community. It focuses on women’s rights, leadership, and product management. The hope is that this program will allow the women to become self-governing and self-managing organisations when the go back to Burma.

Camps: Not a Space for a Dignified Life

One issue that WEAVE is faced with is witnessing the psychosocial impacts of the camps on the refugees.

“Imagine yourself being fed; so like an animal, you are giving food to them, you aren’t giving them space to work or live a dignified life because of the circumstances.”

Within the camps there are high rates of unwanted pregnancy, unsafe abortion, teenage pregnancy, domestic violence, and sexual and gender- based violence, as a result of encampment. For those fleeing their homes, when reaching the camps.

“There is no process of counselling or even talking through what they’ve gone through”  Mitos said, about the camps.

There is also no access to medication such as anti-depressants for the refugees. However, the Thai Government’s Ministry of Public Health does provide immunisation programs.

But in this instance it is not to protect the refugees themselves, but to protect the Thai community from catching many of the infectious diseases from within the camps.

It is clear that the Burmese refugees are in a precarious situation. Forced to choose between a home in turmoil, and a country that doesn’t identify them as having rights isn’t easy. However, Mitos highlights that:

“I always believe in the saying ‘there’s no place like home’… Nobody wants to be displaced. Nobody wants to be. We want to have our own settled life. A place we call our home, a place with a community that needs us or welcomes us and provides our rights. But because of the circumstance, people have no choice but to leave their home in order to survive, not only for them but also for their children.”

It took many of the people in the refugee camps months or years to decide if they would leave their home in Burma. These people face rivers, thick jungles, starvation, cross fire, and malaria to get to the safety of a refugee camp. As Mitos put it:

“The risk is really very high. But they take the risk.”

Many people arrive with missing limbs, and some children arrive without parents.

Illegal and Unwanted - or Return to Uncertain Future

In September of this year, the Thai government announced that Burma was  “clearing landmines along the borders, preparing to build shelters and other infrastructure... to be ready within one year."

Unfortunately, in Thailand, they don’t have identities.

They are illegal and unwanted.

The offering of repatriation may be more inviting than the circumstances that many refugees face in the camps.

WEAVE:  A  Light at the End of the Tunnel

Generating bigger visibility of WEAVE is essential in helping the Burmese. Not only does it provide vital services, it provides the Burmese people with invaluable opportunities, skills and knowledge.

The Burmese are able to empower themselves. They are able to stand up against both the chaos back home and government providing them with flawed asylum. It is because of WEAVE that for many Burmese, “knowledge is power.”

Because no matter what, no matter if they are forcibly repatriated or if they stay in the camps, these people will have a stronger voice woven together by the knowledge given to them by WEAVE and people like Mitos Urgel.

Olivia Whenman is a Safeworld Student Writer in Australia. She is studying for a combined degree in media studies.

"Anne Frank wrote, “Paper has more patience than people.” I wonder if she knew how pertinent this statement would be years down the line?

Personally, I believe that writing holds the key to defeating ignorance. Therefore, I’m going to write to support equality, to raise awareness, to re-educate, and to be a voice for all"