Photoblog: The challenges of everyday life for refugee women and children in Thailand 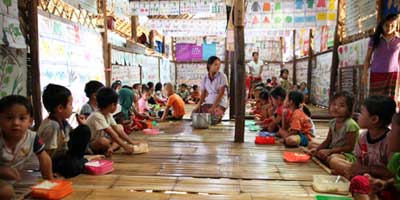 MAE HONG SON, Thailand (TrustLaw) – The sign says “temporary shelter area” but Baan Mai Naisoi camp has been around for almost two decades. Set up in 1996, it’s home to some 13,000 refugees, mainly Karennis from eastern Myanmar.

Accessible via a steep, bumpy road, the thatched huts – materials such as bricks or cement cannot be used because homes are supposed to be temporary – are perched on a precipitous hillside. Residents say monsoon rains bring landslides.

Since the 1980s, hundreds of thousands of people have fled Myanmar, formerly known as Burma, following repeated military crackdowns on ethnic minorities and political activists.

There are some 130,000 people living in nine camps on Thailand’s western border with Myanmar, according to the latest statistics from The Border Consortium (TBC), a non-governmental organisation that has worked with refugees from the country for almost three decades. About 50,000 are newcomers and not registered with the Thai authorities.

Political and economic reforms in Myanmar in the past year made headlines around the world and led to ceasefires between the army and ethnic rebels, but life in the camps remains harsh and the future uncertain for many of the refugees.

This small bamboo nursery school with its colourful, hand-drawn teaching materials is for three to five-year-olds. The children’s parents built it. They couldn’t afford to build individual rooms so the three different age groups share the same space. All nine staff, including six teachers, are female and earn between 650 baht ($22) and 1,100 baht ($36) per month.

Donors cover the costs of the nursery and pay for food while the small number of parents who are employed in the camps by aid agencies pay school fees. Profits from livelihood projects set up with the help of a small non-governmental organisation called WEAVE (Women's Education for Advancement and Empowerment) also help fund the nursery.

Pleh Meh, 45, says she's been weaving her clothes all her life. She fled her village in 1996 after Burmese soldiers regularly harassed her, trying to force her to work as a porter or carry out other work for them. She has had to rely on international donors for food and other essentials because both she and her husband do not have jobs inside the camps and the Thai government forbids the refugees to go out and find work.

WEAVE is planning to set up a weaving programme in the camp and Pleh Meh hopes she will finally earn some money. She isn’t sure whether she would ever go back to Myanmar.

“How are we going to make a living? We haven’t got anything left,” she told me.

WEAVE also supports female education. Here, a study group of 17- to 21-year-olds is making masks to celebrate International Women’s Day on March 8. On a normal day, they would be studying peace building, women’s issues and community development as well as learning English and basic computer skills.

In a workshop later, the students described how they want to be treated.

“I want to have equal work opportunities and the same rights as men,” said one girl. Another said: “I want peace, not violence.”

This is Ban Mae Surin, set up in the early 1990s and so named because the four sections of the camp are located along the winding Mae Surin river. The setting couldn’t be more scenic but the beautiful surroundings belie the harsh lives the residents lead. It is remote, the roads are bad and flooding occurs annually, sometimes cutting the camp off from the outside world for up to two months.

The camp is home to over 3,500 people, half of whom are women and girls, and aid workers say incidents of domestic violence occur regularly in a setting where there are restrictions on movement and few ways to earn an income.

Naw Pa Lwe, chairperson of the Karenni National Women’s Organisation (KNWO) in this camp, told TrustLaw there were 14 cases of domestic violence in 2012, double the number in the previous year. She puts the increase down to women’s greater awareness of their rights and the establishment of a safe house in 2006.

Yu Ma Lay, in her 60s, laughs heartily and often, despite the challenges she has faced. She was the 12th refugee to be registered in this camp, having fled, like many others, after the Burmese army burnt her village in 1983. She’s lived in various formal and informal settlements and has been coordinating the four nursery schools in the Ban Mae Surin camp for the past 20 years.

Two of her children and many relatives have resettled in Australia and America. She hopes to join them soon but is unsure whether this will happen.

“I made a mistake when I was interviewed for resettlement,” she said. “I told them two of my elder sisters have mental problems so they thought it was a hereditary thing.” That is why she thinks she was rejected for resettlement.

The camp has just started a weaving and embroidery programme with WEAVE. The weavers are paid 3 baht (10 cents) per small circle of embroidery, which is about the size of a beer can. Most finish at least 10 a day while doing other household chores. It allows them to stay at home and take care of their children while still earning money.

Some do venture out of the camp to look for work in nearby villages. The pay can be better but it takes about half a day to walk there and they risk exploitation and extortion, especially by Thai security forces.

WEAVE has been working with refugee and displaced women in the border camps since the 1990s. One of its programmes seeks to make use of the traditional weaving skills of the ethnic women by providing them with raw materials. The finished products – there are now over 1,000 product lines – are sold in Thailand and abroad under Fair Trade principles.

These beautiful scarves, pillowcases and table runners on show at the WEAVE shop in Mae Hong Son are all hand-woven by refugee women from Myanmar.

Students from the Karenni Further Studies Programme dance to a song about One Billion Rising –
the campaign to end violence against women and girls – in preparation for International Women’s Day celebrations.