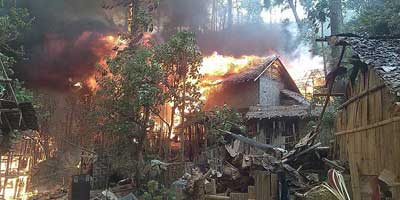 On 7th April 2015, a fire broke out at the Karenni refugee camp in Ban Mai Nai Soi displacing more than 700 refugees and destroying 140 of their makeshift shelters.

Only minor injuries have been reported so far and eight people from Section 1 are missing. Their whereabouts before the fire occurred are unknown so it is possible that they may not have even been in the camp as the fire occurred.

One of the missing is a child who is 8 years-old.

It is believed that the fire was started from an unattended cooking fire. Once started, the fire spread quickly to the surrounding houses around Section 12 all the way to Section 1.

The fire was able to be contained after three hours.

A coordination meeting was then called by the Governor of Mae Hong Son and much of the Royal Thai Government (RTG). The Governor expressed his deep regrets and reminded the community the importance of safety when cooking in the camps.

The Karenni refugee camp is a home for more than 18,300 refugees, who are predominantly from the Kayah ethnic group.

Many have a connection to WEAVE.

There are 2,500 children participating in WEAVE's Early Childhood Development Program and many women are among WEAVE's fair trade artisans.