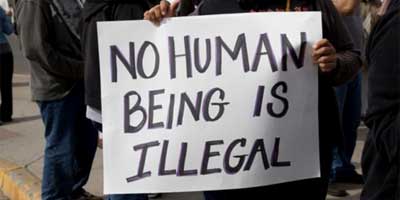 “No Human Being is Illegal” banner. Photo: Australian Greens Party

Sydney, NSW - Despite the publicity asylum seekers currently receive in the news, and the ongoing debates causing chaos in our government, do we, the people of Australia directly affected by these decisions, actually know what is happening around us?

Just who are asylum seekers?

Contrary to popular belief, asylum seekers are not refugees. Asylum Seeker is a title given to a person outside their country of origin; that has suffered from persecution on account of their race, religion, political opinion, etc., before they ‘earn’ the status of a refugee.

Asylum Seekers are, in simpler terms, a persecuted person who is seeking asylum in a safe country.

Refugees, however, are defined by the United Nations (UN) Refugee Convention as:

“refugee is a person who is outside their own country and is unable or unwilling to return due to a well-founded fear of being persecuted because of their race, religion, nationality, membership of a particular social group or political opinion.”

Onshore protection is offered to asylum seekers who arrived on mainland Australia. They are eligible to be assessed under the Refugee Determination Status to gain the status of refugee. If they succeed, the refugees can be granted a permanent protection visa, provided they meet the health and character requirements under the Australian Migration Act 1953 sect87A.

However, as the name suggests, offshore protection is provided for those who arrived in excised offshore places, most notably Christmas Island.

These asylum seekers are barred from the Refugee Determination Status, and instead, are assessed through the Protection Obligations Determination process. This process differs from the onshore process outlined above, as they can only submit a valid visa application under the discretion of the Minister for Immigration.

Human Rights Groups have strongly advocated against this policy, as it is in breach of the UN Refugee Convention, which states that 'all asylum seekers or refugees be treated equally regardless of mode or place of arrival.'

However, it is interesting that the majority of “boat people” – which asylum seekers/refugees are commonly referred to – are ‘genuine’ refugees making up 80% of the visas granted in 2008-09.

Most of the onshore asylum seekers actually arrive by plane. In fact, 97 percent of illegal immigrants arrive by plane on a tourist visa, and then overstay their allowed duration. 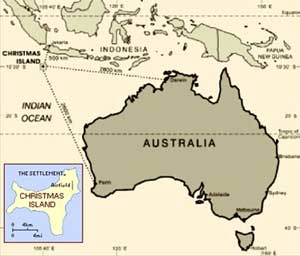 Map of Christmas Island, Indonesia and Australia Photo: Winds of Jihad by Sheik Yer MamiCurrently and in the past, the Australian government in power – either the Liberal or Labor party - has pushed for offshore processing in Indonesia. Examples include the Pacific Solution and the Malaysian Solution. This means that asylum seekers on their way to Australia by boat or by plane will be taken to Indonesia for processing. Here they are placed into detention centres. Several detention centres have been described as “cramped” and “unlivable”.

Jesse Taylor, a lawyer, refugee activist and documentary maker described the detention centre in Jakarta as:

“a small office with two prison cells attached on the third floor of the immigration building. People can’t lie down at the same time so they can’t sleep at the same time”.

Potential refugees would stay in these detention centres for weeks, months, and even years at a time, and even then, it would be impossible to tell if they would ever arrive in Australia.

Currently, there are in excess of five thousand refugees who have signed up within Indonesia. The Indonesian authorities believe that there are more than ten thousand people seeking asylum in Indonesia, without any paperwork.

People Smuggling at a Record High

More alarmingly, there have been estimates of up to 100,000 asylum seekers in Malaysia, waiting to enter Australia via Indonesia. As a result, according to the Australian Department of Immigration, people smuggling in Australia has set a new record in 2012, jumping to 6,555 asylum seekers, in as little as 92 boats.

Many lives have been lost in association with sinking boats, as wide speculation has led to some boats’ engines being rigged to fail, in order to force the Australian Navy to bring these boats into shore. This received much criticism, as the Australian public felt that it was a waste of taxpayers’ money using the Navy as a “water-taxi” service.

Indonesia has recently warned Australia on their toughening refugee stance. This forces more asylum seekers to risk their lives on boat trips to Christmas Island, if Australia does not lift its intake on receiving refugees from Jakarta.

In June 2012, 100 asylum seekers smuggled out of Indonesia, died from drowning because their boat capsized halfway towards Christmas Island.

Plight of Women and Children

According to the ChilOut Organization (Children Out of Detention), 1,053 children in 2011, were kept in detention centres – some with family, some without. A study by ChilOut showed that children, who were kept in detention facilities for one to two years, suffer from mood disorders, major depression, post-traumatic stress syndrome, and anxiety disorder, amongst many other harmful consequences.

It is estimated that unaccompanied minors make up 3-5 percent of the world's refugee population.

In real numbers, this means that there are between 400,000 to 900,000 children, who are seeking asylum without the protection or support of an adult. In addition, ‘separated children’ – children who had been separated from their parents or legal caregiver – are widely exposed to abuse and exploitation.

Refugees who have been processed in Malaysian detention centres have claimed to be tortured. According to Lay Maung, reported by the Herald Sun, he was,

“caned three times, said he was tied up and made to turn his head away from the prison officer so he could not see his face during one ordeal.”

Sam's story can be found at End Child Detention.

Although the detention centres in Malaysia have been described as torturous, the centres in Australia are far from being perfect. 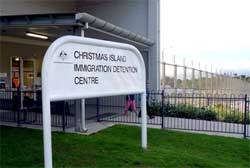 She further added that “they're under 24-hour guard, they couldn't come and go, and it was a cramped, and inappropriate situation.”

Under the UN Convention on the Rights of the Child, children – including those in immigration centres – have a right to the “highest attainable standard of health”. They are also eligible to recover, “in an environment which fosters the health, self-respect and dignity of the child.”

In Australia, it is the responsibility for the Minister for Immigration to exercise discretionary power to release these children into the community. Should they do this, the child is granted a bridging visa, and is referred to a state welfare agency. A detailed explanation is found here.

The Asylum Seekers Resource Centre (ASRC) describes the position a ten-year-old, unaccompanied minor before being rescued by the organisation,

“Areva was just 10 years old and unaccompanied when the ASRC began to assist with her case. She faced being deported, alone, back to Thailand, and to a future of sexual exploitation. We lodged an urgent High Court application to stop her removal, and after 4 years of fighting her legal case we won her a permanent visa to remain in Australia.”

In Australia, there have been improvements in the treatment of children in detention centres. In 2010, the Australian government announced that unaccompanied minors, and families with children be moved to community detention. In September of the same year, Australian Prime Minister Julia Gillard and Chris Bowen (Australian Immigration Minister) announced plans to move “several hundred children” and “vulnerable family groups” out of detention, and into community based accommodation.

On the 29th June 2011, the Australian Government announced that it would release 63 percent of children from detention by the June 30 deadline - leaving only three hundred and twenty nine children in detention.

But this is still too many. The children left in the detention centres face long processing times, without any adequate education and other necessary services.

The United Nations High Commissioner for Refugees (UNHCR), estimates that 80 percent of all refugee women are subject to rape and sexual abuse for use as war weapons, including humiliation.

In refugee camps, single women may experience sexual harassment from local men or fellow refugees. In addition, refugee women often experience the death of children, husbands and other male supporters including brothers, uncles, etc. Because of the high incidences of male imprisonment or death at war, women are often fleeing their country alone, or without the protection of a male. This creates a more likely rate of being sexually harassed.

In refugee camps, women have less access to medical facilities and longer periods in between medical screening for cervical cancer, or sexually transmitted infections (STIs). Morbidity rates for women are high – ranging from the effects of STIs to childbirth. Childbirth may make women vulnerable, as it may trigger painful memories of rape and sexual abuse. Further information for women refugees are found in this great online book here.

Greens Senator Sarah Hanson-Young, in a news conference in March of this year, stated that the ninety limit, ‘‘is what medical professions over and over and over again told this committee, is the key benchmark by which people’s mental health starts to deteriorate’’.

However, Australia still remains to have an indefinite detention period. This effectively means that asylum seekers can be kept in detention centres, for years unless granted a visa or agree to leave the country.

Based on the UN Refugee Convention’s report in 2011, Australia took in only 0.23 percent of the ten million refugees worldwide, placing the country 47th on the World Ranking Scale in terms of acceptance of refugees. Contrastingly, Pakistan, Iran, Germany, Kenya, and Jordon account for nearly half of the refugee intakes in the world.

Comparably, Australia’s land mass and economy is far greater than most of the countries so why do we only take in 0.2 percent of the worlds refugees?

Olivia Chan is a Safeworld Student Writer. She is studying for a combined degree of arts/commerce and has a particular interest in the international relations.

"International relations has provided me with deep insight in how our views about the world are shaped and influenced by differing factors, such as propaganda and politics...

I have a particular interest in human rights, and the issue of sovereignty and its implications on the supernational level. To be able to write about these topics freely is an important way of educating and making known to people around the world the issues that need to be known."