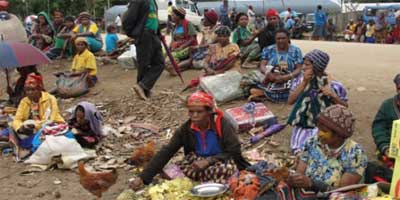 The woman’s skin was pink and raw – scalded by boiling water that her husband threw at her, the aid worker said.

Telling her story at a Medecins Sans Frontieres (MSF) clinic in Lae, Papua New Guinea's second largest city, the scalded woman recalled how she pondered suicide before seeking refuge there.

After receiving medical attention and psychological support, she decided life was worth living after all.

"He was drunk and started an argument in the kitchen," the 28-year-old woman, who was too afraid to give her real name, told the aid worker from medical charity MSF. "He grabbed the kitchen pot and began chasing me around the table. I was terrified."

This story of domestic abuse – which MSF communications officer Veronique Terrasse related to AlertNet after a recent trip to Papua New Guinea – is all too common in the South Pacific nation.

The beauty of its rugged highlands, jungles and islands belies widespread violence against women in the form of gang rapes, knife attacks, beatings and torture – often committed in the home by family members, friends and neighbours.

"Because it’s so widespread, women think this violence is normal,” another MSF worker, a counsellor who didn’t want to be identified, had told the MSF officer. “They have developed a mentality where they say, ‘It’s OK to beat me up with a stick but don’t chop me up’ and this mentality is really stuck in their head.

"Making them understand that beating with a stick is not OK, they don’t deserve it – even that is quite hard. Deep down, it boils down to where society places women here,” she said, describing this issue of violence as “a silent war taking place.”

Surveys by carried out by aid agencies CARE International and Save the Children in 2010 showed that 22 percent of young women aged 15 to 30 in Bougainville, a remote and autonomous province, had experienced forced sex in the preceding year. In the Eastern Highlands province, it was 15 percent of 15 to 25-year-olds.

“Our culture here is changing towards favouring men and because of that we are seeing a lot of abuses,” Ume Wainetti, national programme director of the country’s Family Sexual Violence Action Committee (FSVAC) told AlertNet.

“We also make excuses for why men should behave the way they behave, trying to say things like, ‘he’s a man and he can do these things’.”

Julie Stinshoff, a doctor at another MSF centre in Tari in the Southern Highlands province, told her colleague Terrasse the centre treats an average of 65 new cases of domestic violence and between 10 to 20 cases of sexual violence a month.

“We know this is only the tip of the iceberg,” Stinshoff said. “These are people who come forward and seek treatment.”

WHY IS IT HAPPENING?

Aid workers say a combination of poverty, lack of education and an entrenched patriarchal system may explain the horrific levels of violence against women in Papua New Guinea.

More than one third of the country's 6 million people live below the poverty line and most Papua New Guineans survive on what they can grow in small villages. Violence among different tribes is rife in the Pacific nation where over 800 languages are spoken.

“The impacts of it are very severe, not only as an issue itself but the implications on health and education and various other things,” he told AlertNet.

Aid workers say polygamy, the practice of paying a dowry to a bride's parents, as well as alcohol and drug abuse and rising inequality in the resource-rich but cash-poor country fuel the violence.

FSVAC’s Wainetti told AlertNet the community encourages a woman to accept polygamy and another wife. She said the community will say: “You should be content you’re his first wife, or you have bore him a son so you’re important, let him marry another woman.”

Compounding violence are social stigma towards rape victims and towards women wanting to leave their partners, as well as a lack of law enforcement, support services or awareness of women’s rights, especially in remote corners of the country.

Activists say the police often dismiss domestic violence as a 'family's affair'. Sometimes they themselves are the perpetrators, making women fearful of reporting abuse.

MSF’s Stinshoff said she had treated women with open skull fractures caused by them being beaten with stones, hit by axes and machetes or being punched violently in the face, Terrasse said.

“I have seen women being kicked with boots even when they are pregnant,” Terrasse quoted Stinshoff as saying.

The latest United Nations Human Development Index for Papua New Guinea showed only half as many women as men have secondary education. And the country’s 109-member parliament only has one woman, Dame Carol Kidu, who according to media reports plans to run as a one-woman opposition in elections this June.

There were glimmers of hope when the country’s male-dominated parliament, headed by Prime Minister Peter O'Neill, passed the first stage of a historic women’s right bill last November that would guarantee up to 22 seats for women in parliament after elections in June this year. However, a recent reading of the bill failed to muster enough votes to become law.

"…the news on the 22 reserve seats for Women in PNG (Papua New Guinea) is unfortunately very disappointing,” CARE International’s Raynes said. “Because of the current split in government with approximately a quarter of MPs (the Somare camp) boycotting parliament, the O’ Neil government in recent readings of the bill has been unable to get the numbers needed to pass it,” he said.

“At the moment it looks unlikely that this situation will improve since the parliamentary divisions seem set to continue up until the election."

Compared to other countries worldwide, Papua New Guinea also scored low in the U.N.’s latest Gender Inequality Index, which rates how women fare in reproductive health, empowerment and the labour market. It scored 0.674 on a scale of 0 to 1, with 0 being complete equality between women and men. Only Niger, Democratic Republic of Congo, Mali, Chad, Yemen and Afghanistan scored lower.

MSF stressed the importance of free, quality medical care for Papua New Guinean women, and also the need for the authorities to ensure women had access to justice, for example, by setting up police units focusing on family violence in rural areas. There is currently a Sexual Offences Squad but aid workers say their law enforcement does not go beyond the capital Port Moresby and other major urban centres.

“Without proper healthcare, survivors of family and sexual violence risk serious long-term physical and emotional harm,” said an MSF report released in June that highlighted the “urgent, unmet medical and emotional needs” of survivors at risk of various diseases including HIV as well as depression and suicidal thoughts.

In fact, violence against women has been identified as a major factor contributing to the HIV rate in the country, with 1 percent of adults living with the virus in 2009.

Aid agencies say the violence also affects the wider community including aid workers who have to let women return to partners who abused them because of a lack of safe houses or difficulties in pursuing justice.