Solomons town to relocate to escape climate change and tsunamis 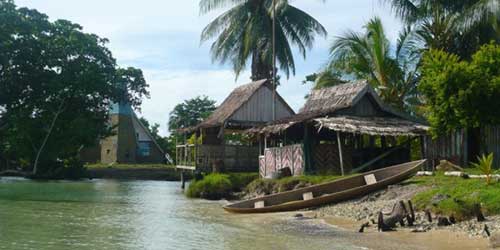 The authorities of Choiseul, a province in the Solomon Islands, have decided to relocate their capital from a tiny island threatened by climate change and tsunamis in the first such case in the Pacific islands, experts said on Friday.

The township of around 1,000 people is located on Taro Island, a coral atoll in Choiseul Bay, less than two metres above sea level. Its vulnerability to storm surges and tsunamis caused by earthquakes is expected to be compounded in the future by rising seas as the planet warms.

Mindful of these risks, communities in Choiseul Bay consulted a team of engineers, scientists and planners, funded by the Australian government, on how best to adapt to the effects of climate change.

It was decided they would take disaster prevention measures in the short term, and also build a new town on the adjacent mainland, where the population will be moved in stages.

"The project followed the ways of our traditions – talking with people, listening to people and reflecting the desires of the people," Jackson Kiloe, premier of Choiseul Province, said in a statement.

Philip Haines, project manager for BMT WBM, an international consultancy that worked on the strategy, said relocation was the only option that would keep the community safe. But it would take "many decades" to complete.

Land to build a new, larger settlement catering for some 5,000 inhabitants has already been acquired, Haines said. Essential infrastructure such as a hospital and secondary school will likely be built in the next five years, he said, adding that everything from roads to government buildings and a hydropower system must be constructed because the land is a greenfield site.

"Basically it's a town from absolute scratch," Haines told Thomson Reuters Foundation by phone from Australia. "So we need to do it well and build it to last for many generations to come."

Haines declined to give a price tag for the project, but said it would run to many hundreds of millions of Australian dollars. The Solomon Islands government would be looking for climate change funding from international donors to finance the relocation, he added.

On a brief visit to the Solomon Islands this week, U.S. Secretary of State John Kerry said the Pacific Island nation stands to benefit from U.S. funding for programmes to deal with the effects of climate change in the Asia-Pacific region.

The United States contributed $250,000 to help deal with the last big disaster in the Solomon Islands - Cyclone Ita which struck in April. The tropical storm caused widespread flooding, killed at least 23 people and affected another 50,000.

The groups behind the Choiseul adaptation plan said it is being hailed by the Solomon Islands national government as a model for other provinces across the nation and more broadly across the Pacific.

The threat posed by climate change has promoted other relocation initiatives in the region.

The Kiribati government, which sees relocation as an option of last resort, is pursuing a policy it calls "migration with dignity". It plans to help establish expatriate communities that can absorb and support more Kiribati migrants in future, while improving qualifications available at home, making better-skilled migrants more attractive to potential host countries.

Elsewhere, some 2,000 people are being permanently resettled from the tiny, low-lying islet of Han in the Carteret Atoll of Papua New Guinea to mainland Bougainville, a three-hour ride on a wooden boat, due to salt intrusion and king tides eroding shores and making farming difficult.

But the Choiseul project is the first time that a provincial capital with all its services and facilities will be relocated in the Pacific Islands, the planners said.

Haines said locals are keen to move as quickly as possible due to the risks they face, noting they may be less attached to their home than other communities because the township on Taro Island only became well-established after World War Two.