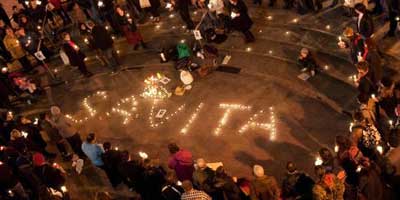 By Louise Hogan, Global Correspondent for Safe World for Women

On October 21st, 31 year old Savita Halappanavar went to the University Hospital Galway, in Ireland, with back pain. She was seventeen weeks pregnant and miscarrying. According to her husband, Praveen Halappanavar, after learning she was miscarrying, Savita asked several times if the pregnancy could be terminated, as she was in excruciating pain. As the foetal heartbeat was still present, she was refused, and was told by medical staff at the hospital that abortion in Ireland is only legal if the life of the mother is at risk.

After enduring three days of horrific pain, the heartbeat stopped and the foetus was removed. Savita died of septicaemia on October 28th.

News of the circumstances surrounding Savita’s death did not break until the night of Tuesday, 13th November when it emerged the Irish Times were leading with the story the following morning.

There was widespread shock and anger, not just in Ireland, but around the world. The story was widely reported in Australia, India and the US and across Europe. BBC, Channel 4, CNN, Aljazeera and France 24 were among those who picked up the story. One headline in an Indian newspaper accused Ireland of ‘murdering’ Savita.

Although terribly sad, Savita’s death was unfortunately not a surprise to many people in Ireland who have been tirelessly campaigning for twenty years, following the Supreme Court ruling on the X case in 1992, to pressure the Irish government to legislate to prevent exactly such a circumstance.

Although there is legislation allowing for a legal termination to save the life of the mother in Ireland, there is a distinct lack of clarity on the issue. Irish law states, “it is lawful to terminate a pregnancy in Ireland if it is established as a matter of probability that there is a real and substantial risk to the life, as distinct from the health, of the mother, which can only be avoided by a termination of the pregnancy”.

The problem is the ambiguous language used, which has led medical professionals to call for clearer guidelines on the issue. What exactly constitutes a real and substantial risk to the life of the mother?

The previous Irish government, defending itself at the European Court of Human Rights in the case of A, B and C vs. Ireland, claimed that, “The procedure for obtaining a lawful abortion in Ireland is clear. The decision was made, like any other major medical matter, by a patient in consultation with her doctor.” When the Court requested details on the amount of legal abortions carried out in Ireland, the government was unable to produce any. The government, as the court puts it, “revealed a lack of knowledge on the part of the State as to, inter alia, who carries out lawful abortions in Ireland and where”.

It should be emphasised that the legislation in place in not ambiguous in its use of the phrase ‘as distinct from health,’  This means that a woman diagnosed with cancer who falls pregnant may not necessarily be entitled to a legal abortion in Ireland, in order to obtain cancer treatment. Yes, cancer is sometimes fatal but not always. So can it be considered a matter of probability that there is a real and substantial risk to the life of the mother, if cancer treatment is postponed until after giving birth, in such a case?

This was the crux of the C case in the European Court for Human Rights, although when the Court called on Ireland to implement the proper legislation, it was on the basis of C’s right to a private and family life. However, they commented, “The Court considers that the uncertainty generated by the lack of legislative implementation of Article 40.3.3, and more particularly by the lack of effective and accessible procedures to establish a right to an abortion under that provision, has resulted in a striking discordance between the theoretical right to a lawful abortion in Ireland on grounds of a relevant risk to a woman’s life and the reality of its practical implementation.”

The term, ‘An Irish solution to an Irish problem,’ is oft repeated in reference to abortion, but it is extremely apt.  An important caveat in Article 40, stipulates that the recognition of the right to life of the unborn does not affect a woman’s freedom to travel or right to information about “services lawfully available in another state,”

So, we have a situation where there is no abortion on demand in Ireland, but anywhere between 3 to five thousand Irish women travel abroad for an abortion each year. It is legal to carry out a medical abortion in Ireland, but the Irish State does not officially know who is carrying out such abortions, or where, or how many. The Irish State, through successive governments, has ignored this issue and ignored the plight of thousands of Irish women.

It is difficult to have a coherent debate about medical abortion in Ireland. Pro-life groups have successfully confused the issue, claiming attempts to legislate are the first step in bringing in abortion on demand. They claim that there is already legislation allowing a termination to save the life of the mother. Unwilling to upset constituents in a country, which although is no longer Catholic, remains socially conservative, and politicians have largely ignored the issue.

Women have been shamed into remaining quiet about their reproductive health.  The cases on this issue are all known by letters - not names.

It is rare for an Irish woman to publicly admit to having undergone an abortion.  However, the seemingly preventable death of a young woman has shamed the Irish people so much more. Thankfully, they are not remaining quiet. A spontaneous demonstration of about two thousand people gathered outside the Irish Parliament the evening the story broke. Vigils and protests were also held that evening in Cork, Limerick, Belfast and London, and more throughout the weekend. An estimated twelve thousand people marched in Dublin at the weekend calling for legislation on this issue and two thousand people gathered in Galway to remember Savita.

There has been criticism by some associated with the Pro-life movement that the death of Savita is being hijacked and used for political means. They quite rightly point out that Ireland has an excellent record for maternal health. But that does not mean that cases such as Savita’s, isolated or not as they may be, are acceptable or tolerable.

Two separate inquiries are underway into the circumstances surrounding Savita’s death, by the hospital in question and the Health Service Executive, which calls for a third, independent inquiry by some politicians. An expert group, previously established to examine the government’s options on legislating for abortion, turned in its report to the Minister for Health the day before the news of Savita’s death broke - rather conveniently, it must be said. The findings of the report are due to go before the Cabinet shortly.  Sinn Fein, an opposition party in the Irish parliament, is due to table a motion calling on the government to legislate. The coalition government is warning its deputies to toe the party line and await the Cabinet’s recommendations, following examination of the experts report.  Campaigners in Ireland have vowed to keep demonstrating until something concrete is done on this issue. Over fifty Members of the European Parliament have written to Taoiseach Enda Kenny, calling on Ireland to clarify its position on medical terminations.

Meanwhile, the world’s press is watching.

Twenty years is too long to wait and it would seem the Irish people are determined to wait no longer. Something must be done to protect the rights and lives of women in Ireland.