For Women in Ireland, There is No Justice 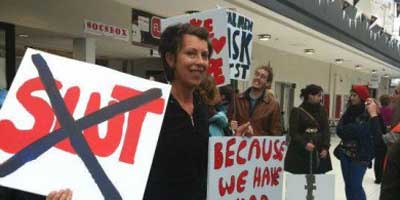 In Ireland, two recent incidences of sex offenders escaping jail terms through the payment of compensation has highlighted the inherent discrimination and ignorance of the realities of violence against women amongst the Irish judiciary.

When women are beaten or sexually assaulted or raped in Ireland, they not only have to deal with the traumatic legacy of the event, but with the apparent indifference of their own justice system.

In 2010, Anthony Lyons brutally sexually assaulted a young woman in Dublin. He tackled her to the ground, dragged her to some bushes, pinned her down and sexually assaulted her. In court, he admitted he intended to rape her and was found guilty of sexual assault by a jury.

In August of this year, instead of the applicable 10-year sentence, Mr. Justice Desmond Hogan sentenced Anthony Lyons to six years, five and a half of which were to be suspended. Lyons was ordered to pay 75,000 Euros compensation to his victim.

In November, Judge Martin Nolan suspended in full the four year sentence handed to 29 year old Graham Griffiths, who violently sexually assaulted a 17-year old girl. The suspended sentence had a number of conditions attached, including the payment of 15,000 Euros to the victim. Griffiths had seven previous criminal convictions, including four --  for causing harm.

What kind of message do sentencings like these send to women in Ireland?

Putting a Price on the Crime

Mary Flaherty, Chief Executive of Children at Risk in Ireland Agency, commented: “It is an affront to basic human rights that once again judges are putting a price on a sexual assault,”

A very small percentage of sexual assaults are reported, much less taken to court. What must these women have gone through to see their cases brought to court, to relive their horrific experiences over and over (keeping in mind one victim was merely 17 years old) and then to have their justice system put a price on what they went through?

The victims had no say in whether they wished to receive compensation or if they thought it appropriate in lieu of a prison sentence for their attackers. One of the judges concerned commented that if the victim did not wish to accept the compensation, he would think of another use for it.

The payment of compensation would not be so outrageous if it was accompanied by the appropriate jail terms. As the Chief Executive of the Dublin Rape Crisis Centre pointed out when commenting on the second case mentioned here, “If he were sentenced to prison, at least he would have rehabilitation available to him. . . Prison is not just about punishment, it is also about rehabilitation,”

The Office of the Director of Public Prosecutions (DPP) has launched an appeal against the leniency of Lyon’s sentence, but it is not likely to be heard until the middle of next year. Lyons was released on December 14th, in time to spend a nice Christmas at home.

He served less than six months of his sentence.

The problem with how violence against women is treated by the Irish justice system is unfortunately not limited to sexual violence.

In November, a Romanian man living in Galway pleaded guilty to a horrific assault on his partner the previous December, in which he fractured her nose, wrist, and eye socket. During the attack, he stripped her, beat her with his belt, and threatened to gouge out her eye with a knife.

He also threatened to sexually assault her and kill her.

The maximum jail sentence of five years was imposed by Judge Griffin, but with the final two and a half years suspended.  The sentence was also backdated to December 2011, when the perpetrator had first been taken into custody.

Would the sentence have been so light if this man had carried out such a brutal attack on anyone other than his partner?

If he had beat, stripped and threatened a stranger on the street, causing so much injury, would he really only be serving two and a half years?

An independent judiciary is obviously an important cornerstone of Irish democracy, but such blatant discrimination against women by a state institution is unacceptable. These cases not only show how violence against women is trivialised by the Irish justice system, it also demonstrates class discrimination --  those with money may avoid appropriate jail terms for their crimes.

Back in 2007, a woman waived her right to anonymity in order to name her rapist who had escaped punishment, receiving a suspended three year sentence from Judge Paul Carney. The assailant had broken into the woman’s home and raped her twice. At the time, the opposition Fine Gael party called for mandatory sentencing for sexual assault crimes. Fine Gael are now the majority party in the ruling coalition government.

Not only have they changed nothing, but the issue is not even on their agenda.

It is also worth noting that it was Mr. Justice Paul Carney who this summer issued an arrest warrant for an alleged rape victim after she refused to continue giving evidence at trial.

The victim, who claimed she was gang-raped when pregnant, was so traumatised by her first experience of giving evidence in court that she attempted to commit suicide.

Judge Carney subsequently issued an arrest warrant and commented. “If she has to spend a long time in prison herself waiting for a re-trial, that’s her fault,”

When arrested, she was held in the same holding cells beneath the courthouse as her alleged attackers.

Neighbouring Britain, with its similar legal system to Ireland, has a Sentencing Council which allows judicial flexibility while still maintaining sentencing standards.

By not implementing such a system, Ireland has once again demonstrated its disregard for the rights and security of women.

Louise Hogan is a freelancewriter and a student at the Irish Centre for Human Rights. She has previously worked with the Strategic Initiative for Women (SIHA) Network in Uganda and for JusticeAfricaUK in London. Her primary interests include women in conflict, genocide studies, conflict transformation and mass atrocity response operations.