Mary Robinson - a Powerful Voice for the Women of Ireland 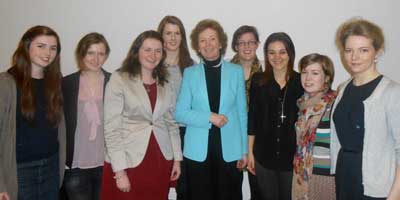 Elegant & Eloquent: Mary Robinson at the National University of Ireland in Galway

Elegant and eloquent was how Irish Times Journalist Fintan O' Toole described former Irish President and former UN High Commissioner for Human Rights, Mary Robinson last night at the National University of Ireland in Galway (NUIG). The public interview was introduced by NUIG President Jim Browne, who spoke of a forthcoming Mary Robinson Centre in her hometown of Ballina, Co. Mayo to which the former President has donated her archives

It was my first time seeing Mary Robinson speak and she was as impressive as one would expect. Any international humanitarian folk among you may not be aware how much she did for women in Ireland as a barrister and senator. Contraception was illegal in the Republic of Ireland until 1985. Really. It was illegal to buy or sell condoms (though curiously, not actually illegal to use them) and the pill was only available by prescription to married women. In 1971, a number of Irish women famously and very publicly travelled to Belfast and returned by train to Dublin, laden down with contraceptives to highlight the ridiculous nature of the Irish laws.

President Robinson consistently lobbied for the legalisation of contraception for years. She spoke about this time last night, commenting on how ridiculous it must seem to young people today. She also was very publicly supportive of single mothers, which was something really not spoken about in Ireland at the time.

She also mentioned how important this experience was to her later, as High Commissioner for Human Rights. She spoke of how she returned to Ireland from studying at Harvard with a "Harvard humility," and assumed change would come quickly. The reality of course was very different. This knowledge and experience later allowed her to sensitively contribute to similar processes in other countries, in her role as UN Commissioner, while recognising that such change must come from within a country and is often a long process. But she was quick to point out that blocking women's access to contraception is not a cultural right, as the Irish case demonstrates.

Hearing about this period of her life - when she was denounced from pulpits across the country and received hate mail - was probably the most interesting part of the interview. Although I was aware of all she had done for women in Ireland, I suppose studying human rights and working for NGOs, I had forgot almost, more concerned with her work as High Commission and then after with the Elders, etc. As a young Irish woman from the west of Ireland however, I have a lot to thank her for and last night was a reminder of that.

Women's Participation in Irish Politics - or Lack Of

There was a panel discussion with Professor William Schabas, Dr. Niamh Reilly and Dr. Nata Duvvury- all of whom are associated with the Irish Centre for Human Rights or the Global Women's Studies Programme at NUIG. When questions were taken from the audience, issues about women in Ireland inevitably arose - particularly the question of female political participation, which is woefully low in this country. I was surprised that none of the women present mentioned reproductive rights initially. It was Prof. Schabas who raised the topic. Although as a formed President, Ms. Robinson does not comment on current political issues, which is fair.

Connecting With the Grassroots

Other important things she spoke about was the importance of making sure young women and men are unafraid of identifying themselves as feminists and also the importance of connecting women in power with women working at a grassroots level. She also talked about the importance of strengthening institutions, rather than working solely as an individual- as she most certainly strengthened the institution of the Irish presidency and the role of the UN High Commissioner for Human Rights.

Afterwards, President Robinson mingled with the audience, signed copies of her autobiography and posed for photographs. It was a great event and credit to NUIG for hosting it!