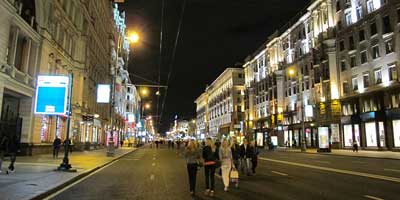 Type in 'sponsor for women' in Google or Yandex (the Russian equivalent of Google) in Russian and you will be amazed by the amount of sites dedicated to matching pretty young women with wealthy older (often married) men who would be willing to 'sponsor' them. By “sponsor” they mean pay them a monthly salary to simply be there whenever the man feels like spending some quality time with them.

Click on one of the 'How to find a male sponsor' links and you will be at a loss for words by some of the advice given to these young, often desperate and vulnerable women:

“Of course, every woman has her own methods of getting her hands on a male sponsor...here is some of my advice:

Read the excerpt about the Gold Digger Academy from Peter Pomerantsev's new book Nothing Is True And Everything Is Possible: The Surreal Heart Of The New Russia and Russia's Gold Digger Academy and you will be deeply saddened by what drives some of the young women to this.

Yes, Gold Digger Academy. The art of finding a rich man, a sugar daddy, is now a profession and a craft in Russia. One such academy has faux-marble halls, long mirrors, and gold-color-painted details. Next door is a spa and beauty salon so after being immersed in some useful 'knowledge' at your gold-digger lessons you can go get waxed and tanned.

A week of such courses costs around $1,000 and these academies are popping up like mushrooms: there are now dozens of such 'academies' in Moscow and St. Petersburg, with names such as 'Geisha School' or 'How to Be a Real Woman'.

But why is there such demand? First of all, Russian culture is still very different from western Europe’s. Here, many women still see their roles primarily in the family, as wives and as mothers, which we can argue is good or bad but at the end of the day it just boils down to cultural differences and traditions. So they need a man who is strong, successful and able to provide for the family.

The only problem is demographics. There simply aren’t enough men for all the women, especially not well-earning men. So Russian women are desperate to snatch up the ones that can provide, and provide well.

As a result, (in Pomerantsev’s words) “bookstores are stocked with self-help books telling girls how to bag a millionaire. A roly-poly pimp, Peter Listerman, is a TV celebrity. He doesn’t call himself a pimp (that would be illegal), but a ‘matchmaker.’ Girls pay him to introduce them to rich men. Rich men pay him to introduce them to girls. His agents, gay teenage boys, search at the train stations, looking for long-legged, lithe young things who have come to Moscow for some sort of life.”

Many of the young women who are willing to do just about anything to have a rich older man - married or not - pay them a lump sum as a sort of monthly allowance (in addition to rent, a car and a few holidays abroad) have come to Moscow from the regions and impoverished provinces.

The woman interviewed for Pomerantsev’s new book, Oliona, tells a tale that is essentially a text-book explanation for their actions:

“She first came to Moscow from Donbas, a Ukrainian mining region taken over by mafia bosses in the 1990s. Her mother was a hairdresser. Oliona studied the same profession, but her mother’s little boutique went bust. Oliona came to Moscow with next to nothing when she was twenty and started as a stripper at one of the casinos, Golden Girls. She danced well, which is how she met her sugar daddy. Now she earns the basic Moscow mistress rate: the apartment, $4,000 a month, a car, and a weeklong holi- day in Turkey or Egypt twice a year. In return the sugar daddy gets her supple and tanned body any time he wants, day or night, always rainbow happy, always ready to perform.”

Many of these girls - often without an education and from very disadvantaged backgrounds - flee to Moscow for a better life, where their only chance of making it is by finding a rich man because without skills, they simply can not hope for a better life in the big cities. Oftentimes, abused in their childhood, they become jaded very early in life and no longer look for love but rather for security.

“‘But what about love?’ I [Pomerantsev] ask Oliona. It’s late; we’re taping an interview in her apartment. We’re drinking sticky, sweet Prosecco. Her favorite. Her nervous little dog snores by the couch.

‘My first boyfriend. Back home in Donbas. That was love. He was a local authority.’

'Authority' is a nice word for gangster.

"‘Why didn’t you stay together?’

‘He was at war with another gang—they used me to get to him. I was standing on the corner. I think I was waiting for a tram. Then these two guys, big guys, grab me and start putting me in a car. I kicked and screamed. But they just told passersby I was a drunk friend. No one was going to mess with guys like that. They took me to an apartment. Tied my hands to a chair. Kept me there for a week’.

'Did they rape you?'

...'They took turns. Over a week. Occasionally one would go out for pickled fish and vodka...' "

This is the reality many of them are running from.

Life after the 'Sugar Daddy'

But even once they find their ‘sponsor’, their sugar daddy, it is still not the end. The minute the sugar daddy gets bored with her, she’s out. Back on the street with nothing but a few possessions in the form of a few glitzy dresses and perhaps a chihuaha. So before this happens women start searching for a new ‘sponsor’. Thus the Gold Digger Academy, a sort of adult education.

Oliona is 22 and she is already nearing the end of her mistress career with lines of younger and fresher 18 year-olds waiting for their prince on a white Bentley/Maybach Rolls Royce to come and save them. Many are also willing to settle for a prince on a measly white BMW/Mercedes/Lexus. The “playing fields are a constellation of clubs and restaurants designed almost exclusively for the purpose of sponsors looking for girls and girls looking for sponsors. The guys are known as ‘Forbeses’ (as in Forbes rich list); the girls as ‘tiolki,’ cattle. It’s a buyer’s market: there are dozens, no, hundreds, of ‘cattle’ for every ‘Forbes’.”

But, as they say, hope dies last and these girls pull out all the tricks they have up their sleeves, some acquired through the University of Life and some through studiously taking notes at the 'gold digger academies'.

“‘Of course I’m still hoping for a real Forbes,’ Oliona says, ‘but if the worst comes to the worst I’ll settle for some millionaire dunce who’s come up from the provinces, or one of those dull ex-pats. Or some vile old man.’ But no one knows what a gold digger’s future really holds; this is the first generation to have treated this sort of life as a career. Oliona has a mafia mining town behind her and god-knows-what in front of her; she’s giggling and dancing over an abyss.”

So of course it’s easy for self-made women and those from upper and middle class families to accuse these poor desperate women, already shunned by all of society, from the safe distance of their loving families, peaceful childhoods, ample opportunities for education and enlightened European values. But what we need to remember next time we accuse these women of being 'expensive prostitutes' who don’t want to work is that, perhaps, this is the only way out of their grim realities.

What we need to do is to fight to prevent this from happening in the future. We need to pressure the government into investing more into educational opportunities in the regions and more disadvantaged areas of bigger cities. We need to ramp out corruption and criminal gangs that still operate freely outside the big cities so that young children growing up have a chance to do so in a nurturing environment where no one fears for their lives or sees crime and immorality as the order of the day.

The Future of Russia

There’s a much deeper issue here than the emergence of ‘gold digger academies’, an issue that concerns society and the future of the Russian nation as a whole. And this issue needs to be tackled fast before more girls see a life of fear, humiliation and dependence as the better of two evils.

DRC: Tackling Poverty and Child Marriage, Through Education and Empowerment