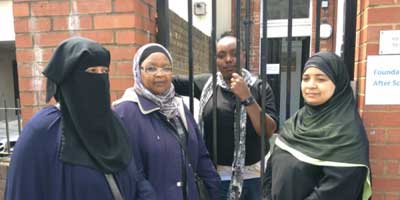 A Safe Haven Under Threat

Lambeth Women's Project has played a vital role in providing information, resources and support to women and girls for almost four decades.

However, recent cuts and austerity measures have culminated in an eviction notice from the school building which they use as their resource centre and meeting place.

Members are currently occupying the building in an attempt to save the project, which provides a life-line for many, especially for minority ethnic women. 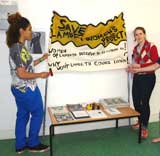 “It’s the best thing that could have happened to me recently. It’s kind of like your safe haven. Since I came here last year, there are other things I am having to deal with, and this environment is very good and nurturing for me personally, to structure me in my current lifestyle situation. You meet other women who are in the same position, and you can connect with these other women and form bonds and relationships. This is like a whole new chapter for me to come along to, and someone is trying to shut the book, and I’m like no, lets leave it open, because I am enjoying it here.”

Zoe, along with many other women are joining together to make their voices heard in a campaign to save Lambeth Women’s Project (LWP), an umbrella organisation that provides space and resources to eleven groups, supporting over two hundred women in London every month.

Young women will bear the brunt from this eviction, leaving them vulnerable without support – and unheard by society.. 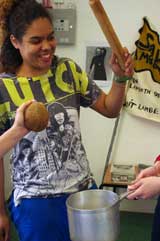 The organisation offers services and exciting new opportunities to women, and to young girls aged 0-19 years.

These young women have access to services such as counselling and support for those who have experience domestic violence.

LWP works in a targeted way with young women, delivering council-commissioned services, enabling them to learn new skills, build their confidence, and learn about women’s health and staying safe.

The eviction notice from Stockwell Primary School, who they share the listed building with, is ostensibly due to a dispute over the use of space and claims that LWP leaves inappropriate material in view of schoolchildren.

In response, LWP says the police-sponsored posters were displayed to highlight the barbaric practice of female genital mutilation to London girls, and should not be used to condemn the women’s group.

'Pot-banging' protest, Monday 4th JuneThe organisation is currently occupying the building in an attempt to save LWP, despite having been ordered to leave the site by June 15. The group is following legal advice to remain with their belongings in the building after the school has threatened to remove their possessions and change the lock.

But the eviction notice is just the final straw of what has been a difficult few years for the women’s organisation, with government cuts hitting the group hard, leaving women to bear the brunt of austerity measures.

And LWP is not alone. 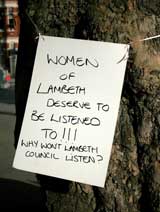 I spoke to Nazmia Jamal, 33, a teacher and film programmer, who has been volunteering for LWP since 2007.

Government cuts have meant that volunteers of LWP have had to reduce the amount of time they can give to the organsiation, with people finding themselves “less well” – mainly due to stress, and unable to afford basic travel costs or childcare fees to allow for regular volunteering, Nazmia explained.

“Like many organisations run by and predominantly for women, we found ourselves in an unsustainable position that is becoming worse as more and more cuts bite. The only real positive is that across Lambeth people are hurting from the cuts and organising together because of them”.

The services and space LWP provides are fundamental to women and young girls in the local area, who have either been “alienated from a poorly functioned education system”, let down by their family and friends, or need somewhere safe to recover from domestic violence and/or sexual abuse.

Women attending can benefit from lessons in literacy skills, to using the library resources on feminism and women’s health. The “safe haven” it provides that is so fundamental and attractive to women, who feel they cannot get the same support elsewhere. 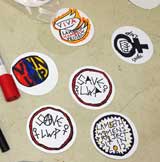 “I have been living in Lambeth for over a year now. My interaction with the project has been mostly around supporting ‘queer’ women, who are looking for a space to meet and feel safe and take part in different activities”, says volunteer Jamal. “This has been especially important since dedicated places for this group are no longer available in London — apart from one or two bars. For women who want to meet outside of a space that sells alcohol, there are very few options.

I think it is very easy to underestimate the value of bespoke services in comfortable, safe surroundings. Everyone's lives are getting harder. Feeling welcome and at peace, even for a couple of hours, is incredibly valuable.”

What impact does this have on women who rely on these services, and why should they be saved?

Women’s organisations provide an important refuge and bespoke support for marginalised groups in the UK.

But with these organisations under the threat of closure due to government cuts, women across the country are increasingly vulnerable to the emotional and physical consequences of issues including rape, domestic violence, homosexuality, forced marriages, “honour killings”, and female genital mutilation.

Women are Victims of Austerity Measures

Due to the effect of the cuts on domestic and sexual violence services, it is expected that over 70,000 women may not be able to access a service after April 2011, putting more lives at risk.

And a recent survey conducted by Women’s Aid shows that 230 women were turned away due to lack of space by the organisation on an average day last year. Approximately 9 percent of those women had sought refuge.

LWP a Lifesaver for Many

According to feminist group The Fawcett Society, 40 percent of Black, Asian and minority ethnic women live in poverty, and are more likely to face financial exclusion than ethnic minority men, or the general population, with some not being given access to a bank account.

In 2008, there were around 1,600 reported incidents of suspected forced marriage cases in the UK. Yet the estimated figures show as many as 3,000 women may be forced into marriage in the UK each year, according to the Government’s Forced Marriage Unit.

Around 22,000 girls under the age of 15 live at risk of female genital mutilation in the UK, and 66,000 women are currently living with the emotional, physical, and sexual consequences of this practice.

Women’s organisations are a vital lifeline to provide appropriate support to women whose issues are poorly understood in the ‘mainstream’.

After five years of volunteering on and off for LWP, Jamal says, “Women feel different in this space.

"Very special events and moments happen here every day. Places like LWP save lives. They give people hope, company and a voice.”

LWP is holding their Lambeth SOS planning meeting on July 5 at Vida Walsh Centre in Brixton, to discuss how to fight back against cuts in the borough.

To help save Lambeth Women's Project, and for more information, go to: savelambethwomensproject.wordpress.com