Women's Brains. No Place in the UK Media? 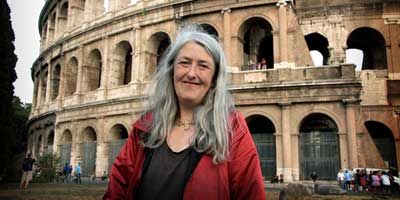 History presenter Mary Beard was described by Sunday Times columnist, A A Gill, as too ugly for TV, calling her grey hair “a disaster”, criticising her teeth, and describing her clothes as “an embarrassment”. Photo: BBC

Most Front Page Articles Are Written By Men

According to a recent study conducted by Women in Journalism, women neither write big news nor make it in the UK. They play a minor role in public life, and are not generally seen as the ‘go to’ for expert comment and opinions.

The study published earlier this month, found that after analysing nine national newspapers for four consecutive weeks, 78 percent of all front-page articles were written by men compared to only 22 percent by women, with the Independent having just 9 per cent of front-page stories written by women.

Men as 'Experts'. Women as 'Victims', Pin-ups or Princesses

It showed that national newspapers tend to seek expert opinions from men (76 percent), but where a victim was quoted it was more likely to be from a woman (79 percent).

What’s more, where numerous male political figures were pictured regularly on front pages of national newspapers, including former French president Nicolas Sarkozy, current French president Francois Hollande and the Secretary of State for Health Jeremy Hunt, the only females that made the top ten images were Kate and Pippa Middleton, and missing victim Madeleine McCann.

So what does this say about how women are represented in the media industry today?

According to Rosie Boycott, founder of feminist magazine Spare Rib, in order for women to appear on the front page, women have to be either “wrong, sexy or a celebrity”.

And this view is not just restricted to the newspaper industry, but appears to be prevalent across all media platforms including radio and television.

Women on TV - 'Time for Botox'

When 57-year-old history presenter Mary Beard took to the screen for the BBC 2 documentary Meet the Romans, she received heavy criticism from Sunday Times columnist A A Gill’s, who said she was too ugly for TV, calling her grey hair “a disaster”, criticising her teeth, and describing her clothes as “an embarrassment”.

Miriam O'Reilly. Photo: BBCAnd last year, the ex-Countryfile presenter Miriam O’Reilly won her case against the BBC for age discrimination, after she lost her job when her show was moved to a primetime spot last year. According to Channel Four News, the tribunal heard allegations that O’Reilly was warned to be “careful with those wrinkles when high definition comes in”, and asked whether it was “time for Botox”.

CEO of Women in Film and TV Kate Kinninmont, questioned in a recent radio interview with the Guardian, whether it is now the case that “if woman are to be seen on TV they should look lovely?” - with the consequences being that the media industry continues to present an unrepresentative reflection of women in today’s society.

What’s more, as only 22 percent of font-page articles are shown to have been written by women in this research - the same percentage that represents the number of female MP’s in parliament - Kinninmont says that women now only have a “quarter of a chance of being seen”.

Yet, despite the role of the media to reflect the views of everybody, by the industry selecting what ‘type’ of woman they want society to see and pay attention to, they are effectively maintaining and redefining the gender stereotype of how women should behave, look, and be represented. But are these views really reflecting the opinions of women in society?

Figures from research conducted by the Guardian last year, shows that the news generally reflects the views of a select group of men, with the findings showing that 78 per cent of newspaper articles are written by men, 72 per cent of contributors on the programme Question Time are men, and 84 per cent of reporters and guests on Radio 4’s Today Programme are men.

Does the Media Have a Responsibility?

With men dominating the views of the media, where does this leave women? And is it the responsibility of the national press and other institutions to help challenge female stereotypes in order to move towards a more inclusive society? Or is it simply down to the individual?

The BBC’s new director general George Entwistle has stated that he hopes to see an increase of female presence on air, but that he does not have the power to enforce this himself, for it is ultimately down to the commissioning editors to make this decision.

However, there are a few signs of hope for women in the media industry, with the rise of sports presenter’s such as Clare Balding - another of A A Gill’s targets - and Sue Barker, especially over the Olympic period. But generally, with only a few older women on screen, and an unequal number of women presenting on the radio, offering comments, and writing the news, is it simply a case of there not being enough women who are qualified for these jobs? Are they just not pushing themselves forward? Or is it that women do not feel comfortable going on air for fear of criticism?

The evidence shows it is certainly a barrier that needs getting through.

The flexibility of journalism should ensure that more female experts are pressed for comments, that more women are given the skills, mentoring and opportunities to progress in their career so that they too can write front-page stories as well as feature in the news.

The media industry needs to move away from the view of women as an object for the male gaze, and instead view them, like men, for their competence, intelligence and ability to do their job.

Yet for the media industry to change their ways and progress, it is also essential that their audience, the public, also play their part in helping to defy sexist stereotypes. For example, do female presenters really need to wear low-cut tops on air in order to attract viewers and  boost numbers? Or can society and the media industry as a whole respect a female journalist, like a male journalist, for what they are saying and contributing to the world of journalism.

"For me, journalism is not just about informing the public, but encouraging people to have an active interest in what is going on around them; to engage in freedom of speech, and use journalism in its multimedia forms as a springboard for discussion, debate, and spreading information."