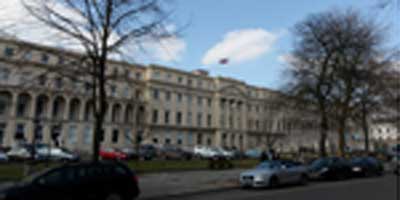 A woman was subjected to a terrifying late-night sexual assault in one of Cheltenham's busiest pedestrian streets.

Police have launched a manhunt after the 24-year-old was attacked as she walked along the Promenade following a night out. The alleged crime took place near the main taxi rank and the woman claimed she knew her attacker, who she had met earlier that evening.

Police have seized CCTV footage of the area in a bid to identify the culprit.

And officers urged witnesses to come forward with information about the incident, which took place between 4am and 4.40am on Easter Monday.

Detective Sergeant Hannah Mackie said: "We need to speak to people who were in the area who may have seen the man with the woman.

"We believe he was at Moomoo and Fever nightclubs before moving to the taxi rank, so if you think you may have seen, or been approached by someone acting strangely or aggressively please call us straight away.

"We also believe the man tried to get into a number of taxis, but was refused before he attacked the victim. Were you one of these drivers? If so we need to talk to you."

The man was described as white, in his late 20s, 5ft 8ins tall, of medium build, with short mousy brown hair. It is believed he was wearing a white shirt and brown jacket.

He is said to have approached the victim on the Promenade before sexually assaulting her.

DS Mackie said the woman was recovering from her ordeal. She added: "We're offering the victim all the support we can."

Colin Pilsworth, co-ordinator of Cheltenham Night Safe: "It's shocking that this could happen in such a central busy area where people expect to walk home safely."

The incident is not thought to be linked to two attempted rapes which took place in Cheltenham in February.

Officers have arrested a 23-year-old, from Ledbury, on suspicion of attempting to rape a woman in St Paul's on February 3. A 42-year-old man has also been arrested in connection with an attempted rape in Robert Burns Avenue on February 18. Both men have been released on bail pending further inquiries.

Anyone with information about Monday's alleged sexual assault is urged to call 101 or call Crimestoppers anonymously on 0800 555 111.