UK: The Demonization of Immigration 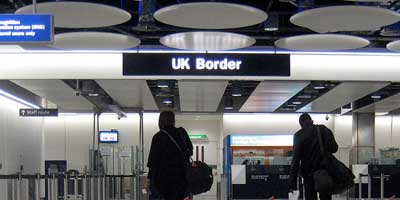 By Peter Hilton, Global and UK Correspondent for Safe World for Women, March 2013

On Monday, 25th March, the UK government announced plans to change its immigration policy, with a particular focus on the access to the benefits system granted to those who have recently migrated.

This would include the introduction of restrictions, meaning that if new migrant families cannot prove that they have been attempting to find work throughout their first six months within the United Kingdom, they will be barred from claiming any form of unemployment benefits along with other forms of financial assistance. In addition to this, Downing Street has claimed that the new measures aim to reduce ‘health tourism’, introducing harsher restrictions on those who can be treated by the NHS (National Health Service).

Immigration policy remains one of the most contentious issues in Britain, with each of the top four political parties calling for a tightening of border control. However, the impact on those who are most at risk has not been considered, women and children, who have migrated to the United Kingdom in hope of finding safety and a better life, may discover they are sidelined by increasingly harsh policies. This is amongst the many criticisms levied at Downing Street by the opposition, who argue against such radical restrictions being imposed on immigration, including the accusation that David Cameron has critically misinterpreted hard data on migrations impact on the United Kingdom. When the rich and often fruitful history of immigration to Britain is considered, it is worth reassessing to what extent these new policies will really help those most in need, and whether they can really be justified.

Before looking into the potential impacts of this change in legislation, it is worth assessing the facts surrounding the effects of UK immigration. The primary motivations for the change are the 'stress being put on the benefits system'; however statistics would suggest this argument is moot. As it stands, the British immigrant population makes up 7 percent of those claiming unemployment benefits, but 13 percent of those in full-time work. In addition to this, the average percentage of immigrants claiming any form of benefits is 10 percent, which is lower than that for British nationals. This compelling evidence is indicative of the limited impact immigration is having on the British benefits system. Furthermore, the suggested impact on health care contradicts the findings of a survey conducted by the National Institute for Social and Economic Research. This indicates that the costs imposed by migrants are relatively small in comparison to the total cost of the services, and with regard to the percentage these groups represent amongst the wider population. Furthermore, figures given by Jeremy Hunt on the issue of debt to the NHS from foreign nationals have been shown to be drastically overblown, with this issue of money owed by immigrants comprising only 0.06 percent of the NHS budget.

From an objective demographic perspective, immigration is also important to the UK to keep population growth above the replacement rate, otherwise, Britain could face issues with social care and an aging population that have been seen in both Germany and France. Other concerns such as housing being provided to foreign nationals also present a motivation for the new legislation. However, the housing minister has openly stated that the vast majority of new immigrants do not qualify for housing upon arrival in the UK, suggesting that as with many of the ‘problems’ with immigration, there is little need for changes to policy. Although these instances present a limited perspective of the evidence, it does suggest that the immigrant population in Britain is not having a significant enough impact, either socially or economically, to warrant the severe changes to immigration policy that have been suggested.

The changes in legislation could have a serious impact on the lives of women and children seeking asylum in the UK. As of 1951, an asylum seeker is anyone who finds themselves unable to return to their country for fear of persecution based on any number of reasons including religion, political affiliation or even gender.

If granted asylum in Britain, an arduous experience as it is, many of these vulnerable individuals may find themselves unable to garner adequate support from the government if the new measures go through. Under the current system, those seeking asylum in the country cannot work whilst waiting for their cases to be resolved and granted full entry to the UK. This is something David Cameron described as vital to preventing further pull factors being introduced to Britain. However, there was no mention of contingencies made for those who have not been able to seek work, who could in turn be denied job seekers allowance under the proposed legislation.

This would leave many who have fled dangerous situations unable to work once in the UK, and unable to claim benefits as a result. With increased focus being placed on immigration in the UK, largely due to the increasing prominence of the UKIP party, there is an argument to be had from the slippery slope perspective. As immigration to the UK is increasingly demonized and restrictions tightened, it can only be a matter of time until Britain sees itself unable to fully help those who are at the highest risk.

It is equally unfortunate that these restrictions come in Britain, a country whose relationship with immigration has long proved to be prosperous, having seen the integration of various cultures from across the globe enrich the nation.

In 1948, the Commonwealth Immigration Act [British Nationality Act] gave full citizenship to members of the British Commonwealth. Unfortunately, due to race riots during the 1950s and widespread discrimination against immigrant communities in the 60s, restrictions were brought in tightening UK immigration legislation. Enoch Powell's infamous ‘Rivers of Blood’ speech found an audience with many despite the clear benefits to immigration and British multiculturalism showcased in events such as the first Notting Hill Carnival in 1966.

In 1972, Idi Amin’s persecution of South Asians in Uganda, saw one of the greatest outpourings of refugees to the UK, prompting advertisements to be published in Ugandan newspapers discouraging asylum seekers coming to Britain. Those immigrants have since led to a huge boost in the economies of cities such as Leicester, which has become famed for its vivid multiculturalism. Surely this presents a key argument in favour of allowing immigration after the popular opinion was for tightening restrictions, especially surrounding at risk individuals.

To surmise, the government’s call to tighten legislation on immigration could prove harmful to women and children, along with other vulnerable groups who have a genuine claim to assistance in the UK.

Many of the statements and statistics listed by David Cameron on Monday, have proved difficult to verify or largely based on conjecture, and although fail safes are necessary, the extent of these proposed measures would appear gratuitous. Over all, history and much of the hard evidence suggests that immigration to the UK can be highly beneficial both to society and the economy, and wantonly imposing harsh restrictions upon new migrants may make the most at risk more vulnerable.

The economic impact of migration liberalisation: evidence and issues - NIESR