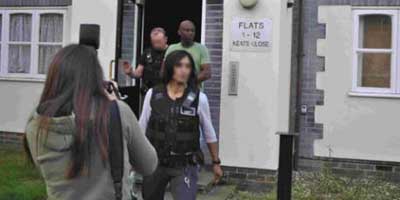 Two teenage girls were flown from their home country and forced into a life of prostitution. After being rescued by immigration officers and put into care in Worthing, they again went missing.

Their disturbing case has been described as part of a “sophisticated, organised human trafficking operation which preyed upon vulnerable children for commercial gain”.

They were just one of more than 20 cases of child sex trafficking in Sussex. Anna Roberts reports [for the Argos]

Living with her aunt in rural Nigeria, 15-year-old orphan J could not afford to go to school.

So when a man, known only as Charles, arranged for her to go to France to be trained as a hairdresser both J and her aunt jumped at the chance.

For three nights J stayed with Charles. He paid for her to have an elaborate new hairstyle so she looked older than her years.

He obtained a false passport for her and made her swear an oath and take part in a Nigerian ritual leaving her fearing she would be at risk of death.

The night J was due to travel to France to ‘be a hairdresser’ Charles told her the truth.

At 15 years old she was to be a prostitute for a woman he knew in France.

He then raped her. She was too scared to tell the police she saw at the airport the next day what happened.

She too was taken by an unknown woman to Lagos, given new clothes and had her hair re-styled.

Both girls – separately but under the care of a woman called Franca Asemota – were taken to London where customs officials saw their passports were fake.

The girls were granted asylum in the UK and during interviews with UKBA admitted the truth – they had been smuggled out of their homeland, tricked by false promises and were much younger than their fake passports.

They were taken into foster care in Worthing and enrolled in local schools but disappeared a few months later.

Odosa Usiobaifo, described as “a trusted agent of traffickers in this country”, picked them up and drove them to Stansted.

As Sussex Police hunted for them, the girls boarded a flight for Valencia, Spain. J has never been found. However, Spanish authorities stopped E and she has since returned to the UK.

Usiobaifo, of Enfield, north London, was found guilty of conspiring to traffic for the purposes of sexual exploitation by a jury at Isleworth Crown Court.

He also admitted conspiring to facilitate illegal immigration and was jailed for 14 years.

Many of the others involved in the girls’ tragic story, including alleged rapist Charles, have never been traced.

Her Honour Judge Anna Guggenheim QC said: “Both girls had fallen victim to the activities of a sophisticated, organised human trafficking operation which preyed upon vulnerable children for commercial gain.

“J and E became friends in Worthing and should have had the chance to start a new life.

“Trafficking children for prostitution is a dreadful trade.

“It dehumanises and degrades children, destroys young lives in order to enrich those who exploit them.

“Knowingly to play any part in it is an extremely grave offence deserving of lengthy punishment to which there must be a deterrent element.”

Senior investigating officer Jonathan Bush, from the UK Border Agency’s criminal and financial investigation team, said: “We believe our investigation has disrupted a significant organised crime group suspected of being involved in the trafficking of young women into Europe through London.

“Working with Border Force, the police and the Serious Organised Crime Agency we are determined to do all we can to stop the abhorrent crime of trafficking.”

West Sussex County Council told The Argus that 20 youngsters – including seven boys – were trafficked into the region between January 2011 and September 2012.

A spokeswoman said: “In terms of working with trafficked children, West Sussex County Council is in fact considered to have best practice in this field of work and is held in high esteem nationally.

“Since working within these guidelines, we have greatly minimised the number of young people who go missing from our care.

“We are not always aware, nor are we responsible for potentially trafficked young people that may be placed in our local authority area by other local authorities.

“Some of these young people left our care as they were either reunited with family members/sponsors following concerns being unfounded or age assessed as adults and in some instances referred to the Salvation Army (support previously provided by the Poppy project) for adults believed to be trafficked.

“The multi-agency approach we have with immigration, the police, UK Human Trafficking Centre and providers has greatly assisted in minimising the number of young people who go missing from |our care, which we have been commended for.”

Tragically J has never been found – and Sussex Police have vowed they will continue to hunt for her.

During the trial Her Honour Judge Anna Guggenheim referred to a “sad moment” when “J was seen to pass out of view of the cameras at Stansted for the last time.

“She has never since been traced, save that it is known that she passed through passport control at Valencia, was in phone contact with you and Franca Asemota thereafter, and that the French authorities have reported one record of her presence in France during last year.”

Chief Inspector Jo Banks, from Sussex Police, said: “We will continue to search for the girl who remains missing.”

Senior investigator Jonathan Bush, from UKBA, added: “The ordeal these girls went through was horrific and tragically one of them remains missing.”

It is targeting a number of organised crime groups suspected of trafficking young women for the purposes of sexual exploitation.

Anyone who has information about immigration crime should contact Crimestoppers on 0800 555 111 where anonymity can be assured or visit www.crimestoppers-uk.org