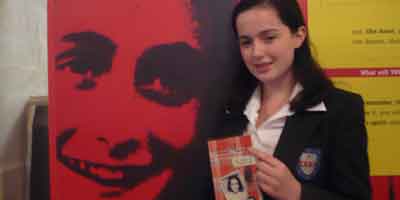 It was once stated, that “those who ignore history are doomed to repeat its mistakes”, and over the past few weeks, in the northern city of Manchester, UK, the question of learning has been at the very centre of the Anne Frank +You exhibition.

Opened to the public in the last week of February and running until the 23rd March, Anne Frank +You is the cutting edge flagship exhibition of the Anne Frank Trust UK. Hosted by Z-Arts in Hulme, the exhibition gives a contemporary profile, with a very clear focus on the issues of identity and the choices which we face in Britain today.

A Journey of Self Exploration

Maintaining its historical roots in the Holocaust, Anne Frank +You starts from the perspective of Anne Frank’s experiences while in hiding during the Nazi occupation of the Netherlands but what is most chilling about this exhibition, is how the Trust has combined the issues of the past and present, to form a journey of self exploration for you as the visitor.

Themes that Anne wrote about in her diary; racial hatred, war and conflict. The value of freedom. Each are presented in an up to date and fully interactive format, which includes a replica of Anne Frank’s room while in hiding, a “genocide tunnel” of shocking images from the Holocaust, combined with footage of more recent atrocities from Halabja and Bosnia.

The panelled section of the exhibition also shows the things we may rarely think about. Child soldiers, racism in football, young people whose desire to have an education, has resulted in harm and includes the story of Malala Yousafzai, who survived an attempted murder by the Taliban.

To welcome the arrival of Anne Frank +You to Manchester, a reception was held on Friday 1st March, where members of the Trust were greeted by local residents, school children and city officials of the Hulme area. Also present were advocates for the charity Combat Stress, with two of the charity’s supporters having their grandfathers present in the Bergen Belsen Concentration Camp, shortly after Anne Frank’s death in 1945.

A powerful opening speech was made by a local author, who recalled her experiences as a Sri Lankan Tamil and her encounters of race riots in Malaysia in the 1960’s. She also described how Anne Frank’s Diary had helped her to develop as a writer, and how Anne’s awareness of events taking place in World War Two, should serve today as an inspiration to tell, what she described, as the “people stories”.

Among several other events taking place on the same night in Manchester, on Friday 8th March, the Anne Frank Trust put on an International Women’s Day talk; “50 Shades of Resistance”, which was inspired by Marian McQueen, the North West Coordinator for the Anne Frank Trust, and the meeting was held to celebrate the resistance of ordinary Jewish and non-Jewish women in WW2.

Presentations were given, which recalled the experiences of the women who served with F-Section of the Special Operations Executive, with examples of courage being described, which illustrated the lives of Noor Inayat Khan, Nancy Wake, Violette Szabo and Oddette Hallowes.

Other women whose activities were described, included Irena Sendler, a Polish Roman Catholic, who served in the Polish Underground and whose acts of resistance to Fascism helped to save the lives of hundreds of Jewish Children. Another illustration of courage, was the story Jane Haining, a Scottish lady who ran an orphanage in Budapest but was arrested by the Nazis for “working with Jews” and died in the Auschwitz Concentration Camp.

Inspiring Young People Towards a Just and Humane World

Since 1991, the Anne Frank Trust has been at the forefront of educating people on the legacy of Anne Frank. According to Gillian Walnes, the executive director of the Trust; “Through our exhibitions, training programmes and campaigns, the Anne Frank Trust, the British educational organisation that proudly bears Anne's name, has been imparting her vision of a more just and humane world to thousands of young people per year, inspiring them to become active responsible individuals.”

Only last year the Trust worked with over 24.000 young people in schools across Great Britain and over 12.000 people visited either Anne Frank +You, or the Anne Frank: A History for Today exhibitions.

The Trust also works with over 2.500 people in both prison and secure units, something which Anne Frank herself would approve of because as this one young woman rightly stated, before anybody even knew her name; “nobody need wait a single moment before starting to improve the world.”