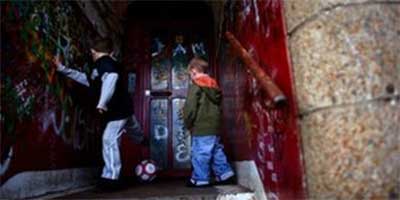 Researchers said the impact of the problem in the Glasgow City Council area was the third highest in the UK.

The cost of child poverty was said to be highest in Birmingham, at £914m a year, followed by Manchester, at £446m a year.

An estimated 36,367 children in the Glasgow City Council area are living below the poverty line, according to the research.

CPAG asked Loughborough University experts, who have already estimated the national cost of child poverty, to produce a breakdown of its impact on every local authority in the UK.

Across the UK, child poverty is said to cost £29 billion a year.

In addition, £8.5bn is lost from people's earnings as a result of having grown up in poverty.

Researchers put the cost of the problem in the Edinburgh City Council area at £156m a year, with the impact in Fife at £158m.

In North Lanarkshire, it was estimated to cost £170m but in Perth and Kinross it was £33m and in Stirling it was £26m. In both the Orkney Islands and the Shetland Islands, the cost was £4m a year.

Mr Dickie said it was crucial councils did everything possible to help families. He suggested removing childcare barriers to work, ensuring families have access to benefits and tax credits advice and extending free school meals and clothing grants.

He added: "Reducing child poverty benefits everyone by cutting the costs to local authority services and boosting the local economy. Many will be shocked to hear that so many children in every area are living in poverty."

A spokesman for Glasgow City Council said it was not clear from the report how figures about projected costs were arrived at.

However, he said child poverty was well recognised by the council and added: "Improvements are being made to the lives of those most affected by deprivation."

He added: "A wide range of initiatives is being undertaken to support children and families in Glasgow, and many of the recommendations in the report, such as a living wage, have already been introduced by the council.

"We are committed to tackling poverty and health inequalities and through our long-term strategy of focusing on jobs and the economy, targeted support for the vulnerable, the early years and education, we hope to bring lasting change to the city."

A Scottish Government spokeswoman said it was doing everything it could to address social inequalities. While figures released by the Scottish Government last month showed a fall in the number of children in poverty in 2011/12, she said there was "no room for complacency".

She warned "changes introduced through the UK Government's cuts to capital budgets and welfare reform agenda threaten to have a significant impact on children".

The spokeswoman said the Scottish Government was "working to strengthen the economy and to secure new jobs and opportunities to our communities" and added: "We are also improving the quality and flexibility of early learning and childcare support, through the Children and Young People (Scotland) Bill.

"This government is taking forward a programme of work to create a fairer, more equal Scotland.""