'Silence is a Sin' - Scottish Muslims Are Speaking Out 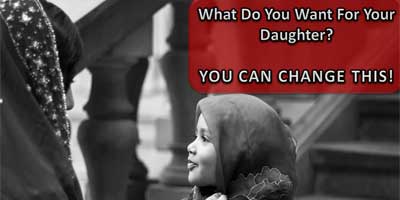 Article first published by scottspolitics.com and reproduced here with kind permission of the author

A new campaign, You Can Change This, calls on Muslims across Scotland to stand up against domestic abuse.

Religion and feminism; two words that don’t always work together in a sentence, but words that I’ve never considered mutually exclusive of one another.

For the purpose of this article, I should point out that I am not a religious scholar (I have a relationship with God which tends to become stronger when a bunny scurries across the country road that I happen to be driving on), however I come from a Muslim family and I respect the traditions and values that comes with. Feminism is equally important to me, I see it as a belief system, so as far as I am concerned, and countless women I know are concerned, you can be a religious feminist. But like all things, religion is steeped in patriarchy. It is men who preach the religion and therefore that preaching is done through a man’s vision of the world. This, consciously or subconsciously, keeps a man’s privilege intact and a woman’s inferiority fixed.

However, I am a firm believer that religion is not to blame for the sexism its opponents believe it preaches – culture is. It’s how we have chosen to interpret it over the years, and how “absolute” a meaning we have decided to take from it. It is this very culture that a new campaign by the Muslim Women’s Resource Centre is challenging. The campaign; You Can Change This, calls on Muslims across Scotland to stand up against domestic abuse. In Scotland a domestic abuse incident is recorded every 10 minutes, this doesn’t include the many incidences that do not go reported through fear or pressure. It is likely to be even more frequent than we know. In your 30 minute lunch break, how many women is that?

But Change This is a campaign with a difference. There are two things that I want to congratulate this campaign on; firstly not being shy or apologetic in its feminism and protection of women and secondly, it turning the very thing used against women on its head. I hope it doesn’t lose either as it gains ground.

Often, in a misguided interpretation of Islam, people believe that domestic abuse, sexual assault or forced marriage are under certain circumstances condoned or are “private matters” for families to resolves, rather than authorities to protect against. This campaign uses religious verse and Imams (preachers) to spread the message that all violence against women is wrong and that using the Quran to justify it, is equally wrong. By rebutting the very theories and argument people use as a means to justify violence against women, leaves them with nothing more than the emptiness their hollow arguments had in the first place and the echos of misinterpretation and denial. There is a reason I can recite the most feminist and socially just verses of the Quran, they have come in very handy.

But this campaign, like most, can only work if it knocks on every door where religion is being used to mask violence against women. The campaign can’t wait for people to come to it; it must go out to the community, no matter how uncomfortable that might be. The truth is usually uncomfortable for those avoiding it. I’ve always believed that to create change, you have to engage a community to become change makers for themselves, otherwise, yours is just another campaign poster in another window.

You can use any belief system, any religion, to plead ignorance and maintain your status quo. People have done it with equal marriage, they have done it for a woman’s right to choose and they are doing it to excuse violence against women. But you have to ask yourself, what fear is it that you are veiling with your convenient pick and choose scripture? Why does the equality and safety of others make you feel so unsafe? Answer these questions and then maybe, as the campaign slogan suggests, you can change this.

You Can Change This