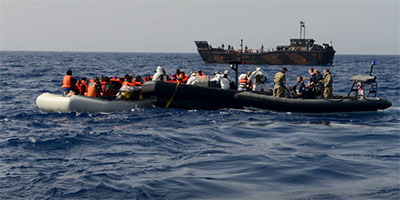 The European Union is spearheading a campaign to enable military action against the boats carrying migrants seeking to leave Libya and arrive on EU shores – and on May 11, a draft resolution will be presented to the UN Security Council proposing that a UN mission in Libyan waters be authorised.

The UN mission will rely on the Security Council’s powers under Chapter 7 of the UN Charter, which enables the UN to authorise the use of force in order to uphold international peace and security. The draft resolution will presumably try to demonstrate that the current levels of irregular migration from Libya are a threat to international peace and security and therefore will authorise military action against the boats belonging to or leased by smuggling rings.

If passed, the mission established by the resolution would be enacted using the military might of EU member states, with the possibility that NATO forces could become part of the mission at a later date. The draft resolution will be tabled two days before the EU unveils its new migration agenda, to be aimed at addressing the numbers of people seeking to reach EU shores.

It seems likely that without Libya’s consent, which so far is not forthcoming, the mission will not undertake military action on the ground in that country. Instead, it will probably be authorised only to take military action in Libya’s territorial waters. Its aim will be to destroy the assets and infrastructure of the smugglers who are using boats to bring people over to EU shores.

This is being presented as a proportionate response to a desperately urgent crisis – but it’s just another attempt to shore up a failed agenda.

The notion that irregular migration is first and foremost a threat to international peace and security rests on very shaky ground. One argument for this mission might be that the EU is trying to protect the fundamental rights (to life, for instance) of the individuals who would be transported on these boats – but there simply does not seem to be a sufficient threat to peace and security for Chapter 7 powers to be used.

Given that the premise is so weak, it will be fascinating to see what arguments the sponsors of the draft resolution actually put forward.

Support for a UN mission, which would be led by Italy with the backing of ten EU member states, seems limited to western European states and their allies. The Russian ambassador to the UN has stated that military action against boats used by smugglers is unnecessary and that it would be better to focus efforts on enabling the Libyan government to regain control of the country.

And while Russia’s motives for supporting state sovereignty might be more politicised than humane, there is much to be said for focusing on the root causes of migration rather than on the smuggling rings that bring people across the seas.

But the EU has long pushed back against serious attention being paid to why individuals risk their lives to irregularly migrate, preferring to focus on migration as a security issue.

While Libya has long been a transit point for African migrants trying to reach the EU, the numbers leaving that country have increased exponentially since the country’s post-Gaddafi descent into violent chaos. Until now, the EU has implemented policies such as funding governments to criminalise individuals who seek to leave their territory with the purpose of irregularly migrating via boats and funding detention facilities in transit states.

This agenda has always clashed with international human rights obligations, but this draft resolution shows it could be just the beginning. The prospect of international legal sanction for military action against individuals that pose no clear threat or danger is very troubling. 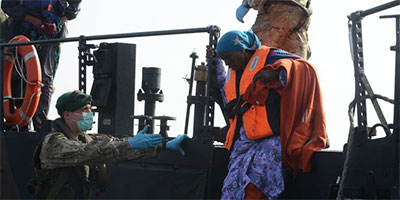 This attempt to turn migration into a security issue is not new. The EU has long used security personnel, language and activities to address irregular migration. The result has been a failure to address the fundamental human rights issues thrown up by the ways irregular migrants are treated within the EU – not only as regards detention and deportation, but also in the ways migrants are treated by state authorities more generally.

It must be acknowledged that by seeking to assist individuals irregularly migrating via boats, EU states are at least proving more humane and proactive than countries such as Australia. Only a week before the UN resolution was drafted, the Italian coastguard mounted a huge rescue operation to save just under 7,000 people.

But now things have changed, and the EU’s Mediterranean states are looking for ways to block the boats from embarking for the EU in the first place.

Heads off the hydra

For few years, the EU has been trying to stem the tide of irregular migration with operations in transit states. EU-funded detention facilities flying the EU flag have been built in Turkey; EU-funded and EU-influenced policies criminalising people trying to exit countries have been implemented in Tunisia and Libya.

These efforts all raise fundamental legal and political questions about the limits of the EU’s influence, state sovereignty, human rights, and the fundamental freedoms of all individuals – but, as the current crisis shows, they have also not worked.

We have only seen more and more individuals trying to migrate to the EU via dangerous and unregulated means. Of course, the issue of how we deal with migration must be revisited and addressed, but it is clear that this security agenda is not the answer.

With that in mind, it is deeply disturbing that a draft resolution upping the ante is to be tabled at the UN Security Council. As a permanent member, the UK is said to be at the fore of drafting the text – and the key EU states backing it are the ones most affected by irregular migration. Those states include both the Mediterranean coastal countries and others that take in large numbers of migrants (such as Germany and Sweden).

All this despite the obvious fact that treating migration as a security issue has failed on every level. The sheer number of individuals arriving by boat is being cited as a reason for new security measures – but responses such as these amount to nothing more than cutting the latest head off the hydra.

Rosa Freedman is Senior Lecturer (Law) at University of Birmingham.

This article was originally published on The Conversation. Read the original article.