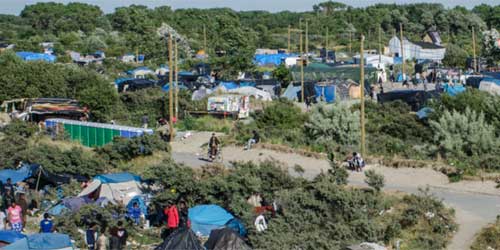 'As the sun sets on Calais, a new barbed wire fence glints in the evening light, casting a shadow over the growing migrant camp known as the “New Jungle”.' Source: The Conversation. Photo Thom Davies | The Conversation

The ‘jungle’ camp outside Calais has been growing ever denser and increasingly is looking more likely to become a permanent fixture on the Anglo-French border. Within the camp, increasing numbers of individuals are going without basic access to fundamental necessities of life, hindered by clashes between the French and UK governments over whose responsibility the migrants are.

Despite the deeper issues such as proliferation of scare mongering media stories painting the migrants as greedy or even criminal, one of the most outwardly ostensible issues is a lack of understanding of the asylum rules in the UK and France, which is in turn hindering the provision of key aid to the migrants.

With issues over whether the migrants should be obliged to seek asylum in France or eligible to wait and seek asylum in the UK, it is apparent that there should be a greater understanding of the rights of individuals seeking to come to Europe for aid. This article seeks to examine the UK policies towards claiming asylum, and provide a brief overview of how the system works from a legal perspective. Once this is apparent it should be much easier to concentrate on delivering much needed supplies and assistance to the migrants in Calais, as well as other asylum seekers.

The Jules Ferry relief centre (on the outskirts of Calais) ostensibly provides food, water, toilets and showers, as well as shelter and education for children. It is funded by the French government but supported by several charities. The 'Calais migrants' rely heavily on charity and individual volunteers and donors. The charity 'Doctors of the World' reports appalling conditions for migrants in and around Calais, including pregnant women and very young children - many of them unaccompanied, with a lack of essentials such as safe drinking water, adequate food, sanitation and proper shelter.

The basis of asylum law in the UK is very simple - it is based on the 1954 Refugee Convention which states that anyone in the UK has the right to seek asylum; and the UK government is placed under an obligation not to return anyone to a country where they have a genuine fear of being persecuted.

As such, anyone from any country may apply for asylum in the UK; and if successful this will see them officially registered with refugee status. The step from becoming an asylum seeker to a recognised refugee is an important one legally as a host of new rights become available upon obtaining this status including the right to apply for allocation to housing from a local authority in the same way a British Citizen would be able to, as well as gaining access to housing benefit to assist with rent payments and a host of other benefits.

It is not a simple process - though and there are a number of requirements to be designated as a refugee within the UK. In the UK, asylum seekers  - according to the Law Socitey - must apply for refugee status at the ‘Asylum Screening Unit’ in Croydon. This facility assesses the nature of the asylum claim for refugee status. An application for asylum may be made at the port of arrival. However, the substance of the claim is not examined at the border.

Any potential refugee will have to demonstrate that they are at a real risk of persecution as a result of their race, religion, nationality, political ideology or membership of a particular social group and that their national government is unable or unwilling to protect them. In addition to this applicants will also be expected to provide valid ID, photographs and fingerprint ID.

This process is all dealt with through two interviews, one of which is more a matter of information gathering and formality, whilst the second is a more detailed look at the individual’s circumstances. Moreover, during the time in which the asylum seeker is present in the UK, they face additional challenges such as the threat of immediate and indefinite detention at any time without charge whilst in the UK, as well as electronic tagging.

Those who are able to apply for asylum will also be eligible to apply for permission to stay in the country on the basis that they will face inhumane or degrading treatment if they were to return to their country of origin. If they can show this they will have a claim for ‘humanitarian protection’.

The Rights of Asylums Seekers in the UK

Whilst in the UK, asylum seekers have the right to apply for Asylum Support. Asylum Support includes financial contributions towards housing and maintenance, but also includes important services such as access to health care and the right to have children educated in a state school.

However, there is no right to choose the area in which they live, so many may be divided from the family they have come to the UK to join. In reality the money given represents only £36.95 a week per person in the household, with additional payments for expectant mothers or very young children. The right to education for children is a mandatory one - any child between 5 and 17 must be educated in a state school whilst asylum is being sought.

The above rights apply to those still seeking asylum; the situation becomes bleaker if the individual's application has been refused. They will only receive a prepaid card with £35.39, but will be given somewhere to live. All other payments are drastically reduced, and many feel this is unfair, especially as many who are refused are detained, awaiting deportation from the UK.

From the above, it is clear that no person can legally apply for asylum in the UK unless they are actually within the UK. By definition, this leaves a number of issues in relation to the Calais camp; primarily the issue that the care and maintenance of the 'Calais migrants' rests solely in the hands of the French government.

Regardless of whether individuals have applied for asylum in France, there is no obligation, under international law, for the UK government to do anything. This means that any efforts put in by the UK government will predominately be solely as a sign of international solidarity with the French government, or entirely self-serving in an attempt to prevent further migrants entering the UK.

In the last few months, the UK government has pledged £12 million to help deal with the crisis, though it can be virtually guaranteed that none of this money will be used to help the migrant population, and will instead be used to increase security measures preventing many valid asylum seekers from entering the UK.

Many based in the Calais camp will face further issues if they are unable to secure entry to the UK, as one of the legal reasons for refusal of an application for asylum in France is ‘abuse of the system’ which can include delay in applying for asylum in France.

For those asylum seekers hoping to enter the UK, they may find themselves unable to apply for asylum in either country or left with little recourse than to cement their position in Calais. Furthermore, the French system is more convoluted than that in Britain, with numerous permits to be obtained before the application for asylum can be submitted, leading to further hurdles for the already desperate individuals involved.

The French policy is further complicated by EU law, namely the ‘Dublin II Regulation’ which requires migrants to apply for asylum in the first EU country in which their finger prints were taken. This leaves many who arrived in Greece or Italy from war-torn nations such as Ethiopia or Eritrea with little recourse, as the French will simply return them to their initial country of entry to the EU, thus leaving them with very few options.

Further to this, French law states that France has an obligation to protect minors in difficulty which means providing good living conditions and education until the child’s majority. The failure to provide this within the Calais camp is a clear failure in this regard, and one that must be seriously considered by the French government.

Overall, it is very clear that claiming asylum within the EU is a deeply convoluted and complex process riddled with obstacles for those who have already overcome great suffering to simply reach their destination, often travelling thousands of miles from war-torn and deeply impoverished home nations.

The failure of the French and UK governments to protect these vulnerable individuals has been nothing short of reprehensible. Hopefully, once the obligations of these countries becomes better known, increased public and international pressure will work to improve the lives of those in the Calais camp and take the responsibility from out of the hands of struggling NGOs.

BBC: Calais migrant crisis: The Britons in the 'Jungle'

The Demonization of Immigration - by Peter Hilton