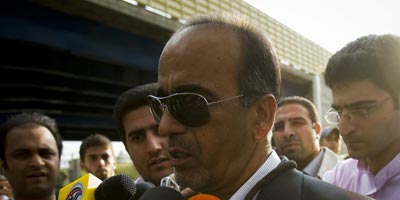 On Tuesday morning, security forces entered the home of Massoud Shafiee, the lawyer representing the recently released Americans, and after several hours of searching his home and offices, transferred him to Evin Prison.

In an interview with the International Campaign for Human Rights in Iran, Shafiee said that 'going to prison is not a problem, it’s the best time to get some rest, something I need'.

“Yesterday at 7:00 a.m., five security forces entered my home with my arrest warrant. It was strange to see an arrest warrant issued for me, as arrest warrants are usually issued for murderers or fugitives,” Shafiee told the International Campaign for Human Rights in Iran a few hours after his release.

“Going to prison is not a problem, it’s the best time to get some rest, something I need. I asked the gentlemen yesterday, ‘why don’t you consider the dignity of the Judiciary? Why would you want to arrest me?”

“They entered my home and searched the entire house, including the safe, the closets, everything for one or two hours.

Even though they were respectful, this act was wrong in essence.

They came right after my wife left the house. I guess they didn’t want to upset my wife. Then they asked me to wake up the rest of the sleeping family members.

After searching the home, they took my passport and several other things and brought me to my office.

There they confiscated the computer and hard drive, documents, the case files of the two Americans, and several other documents and took me to Evin.”

Regarding his interrogation at Evin that lasted for several hours, Shafiee said,

“Most of the talk was about the two Americans’ case. But thank God everything ended well and they returned my documents, including my passport, to me, and I returned home. Whatever the young Americans do, and whatever they say, how is that related to me?

I believed that they were innocent, and I did my job. But if, upon going home, they say some things, how is that related to me? My arrest did not have any legal justification. I am an Iranian and the entire time I defended the two Americans, I naturally thought about my country’s interest to protect the dignity of the [Iranian] Judiciary, and this is how I am treated in return for my honest work. I am so disappointed.”

“I just hope that I have not been barred from leaving the country. I am leaving next Sunday to visit my daughter, and I wish to visit the grave site of my sister who died a while back. The process of representing the Americans was prolonged and I was unable to go and see my sister in her last moments,” said Shafiee, adding that, “Now I am concerned that perhaps I have been barred from leaving the country, and it appears that I have.

This morning I went to Evin to inquire about whether or not I have been barred from leaving the country.

If this is the case, I should at least get a refund on my plane ticket. But they didn’t let me in and said that they would get in touch with me.”