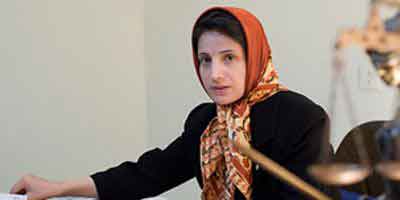 Detained Iranian lawyer Nasrin Sotoudeh is being denied visiting privileges for refusing to wear the chador in prison. Her husband, Reza, reports that last week he and his children were not allowed to visit Nasrin on the grounds that she had lost her visiting privileges.

Nasrin has refused to wear the chador on top of the regular hijab [head scarf and tunic], saying it is a violation of her rights.

She has also indicated that political prisoners should not even be obliged to wear the usual prison uniforms given to other prisoners.

Male political prisoners are not obliged to wear uniforms and can wear their own regular clothes.

In September, the judiciary announced that the requirement for women to wear the chador in court had been rescinded.

Nasrin has been sentenced to six years in prison and a 10-year ban on practicing law for her involvement with the Human Rights Defenders Centre and for taking on the cases of political prisoners.

She has been charged with acting against national security and propaganda.