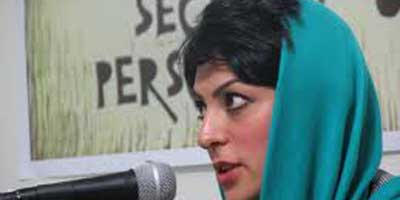 Shiva Nazar Ahari is a 26-year-old human rights activist specializing in child labour and the defense of political prisoners, and a former editor and current spokesperson for the Committee of Human Rights Reporters. She is also a journalist, blogger, and member of the One Million Signatures Campaign and Tara Women’s Association. Formerly a civil engineering graduate student, Ahari was expelled from university as a result of her student activism.

Shiva has been convicted of plotting against the state, among other charges.
She has been jailed for 6 years
Her lawyer, Mohammad Sharif, said she has to pay a $400 fine as an alternative punishment to 74 lashes.

"You Taught Me to Not Break, Father"

There is only one day in a year that is dedicated to you. Shed your tears!

Your tears wash will away all the sorrows of today!

and drown all the offenses I did not commit.

Dad, go ahead and cry. It is your right to pour out pain.

It has been months since I slept in the room next to yours.

You have no news of your daughter. Today is your day and, once again, I am not there.

Dad, in the midst of all this resistance, my hands still miss your hands.

My shoulders still crave your shoulders.

Albeit I am now grown up and stronger and exercise resistance in Evin Prison.

No matter how strong I have become, I sense I am missing a part of me when you're not there.

Dear Dad, whenever I cross a street, my hands reach for your hands.

Shiva in her office.

Shiva was first arrested in 2002. She was held for over a month.

"I overheard her talking to her friends that her cell was so small, that if she extended her legs or hands, they would touch the walls, and that the food was terrible." Her mother, Shahrzad Kariman, tells.

Over the next 2 years Shiva was arrested on several occasions

During this time she started volunteering with a child advocacy NGO "Child Labor". She was passionate about children driven to begging because of the families poverty.

"Once when she came home she was carrying many fortune-telling cards. I asked her why she bought so many, and she replied that the child had told her that if all the cards were not sold when returning home, they would get a beating. When she was at the Central Offices, she would ask a child about the bruises over half of his/her face, and learn that the child’s father had given them a beating because they did not raise the desired amount of money."

On June 14, 2009, during the wave of protests that followed Iran’s disputed presidential elections, she was again detained and held in solitary confinement for 33 days. Eventually in September 2009 she was granted bail.

Committed to her work

The day after this film was made both Shiva and Mahboubeh were in prison.

Despite being on bail Shiva refused to stop her campaigning work. By now she was a member of the Committee of Human Rights Reporters, and could not be silenced.

While awaiting trial she began helping a young woman who had been raped at Evin by her interrogator.

With her friends, she also started a campaign for Atefeh Nabavi, a student arrested during the June 15, 2009 protest march in Tehran.

Shiva also published a piece about her experience at Evin talking about the sexual abuse and physical torture sustained by many of her fellow detainees.

"Shiva protests against violations of human rights without concentrating on the ethnic, religious, gender, political, and even reputation backgrounds of individuals" says her friend, Sepideh Pooraghaiee, see A letter about Shiva Nazar Ahari

Once more held in solitary confinement, she has now been charged with three crimes: Assembly and Collusion to commit a crime, Propagating against the Regime and "Moharebeh" (enmity with god).

According to her mother, the accusations accuse her of  “causing unease in the public mind through writing on the CHRR’s website and other sites” and “acting against national security by participating in demonstrations".

Shiva denies attending the demonstrations, saying that she was at work on those days.

Her trial to be held on September 4th could result in a lengthy prison sentence - or even the death penalty.

“We requested a visit with the prosecutor some time ago, but have received no response,” said Shahrzad Kariman, in an interview with Change for Equality about prison conditions for her daughter.

“We have also requested an in person visit with our daughter in prison, on three occasions, but those requests have had no response either,” continued Shiva’s mother.

On 03/09/10 Shadi Sadr, a proment Human Rights Lawyer, received an  International Women of Courage Award. At the ceremony in front of Hilary Clinton, she publicly dedicated her award to Shiva.

Persian2English: The Shiva I Know: A letter about Shiva Nazar Ahari

ICHRI: My Daughter Has Denied the Charges Against Her”

With thanks to:  Enduring America. Amnesty International, Wikipedia