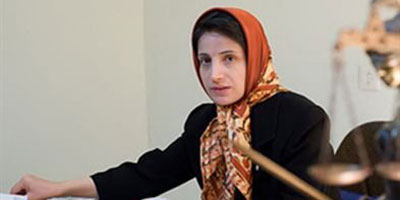 Nasrin Sotoudeh is a leading human rights lawyer widely respected for her efforts on behalf of juveniles facing the death penalty and for her defense of prisoners of conscience.

On Sunday January 11th 2011, Nasrin Sotoudeh, a mother of two, was sentenced to 11 years in prison

The sentence included five years for 'violating the Islamic dress code (Hejab)' in a filmed acceptance speech, in which she was accepting a Human Rights Prize by the International Committee on Human Rights, in 2008.

Five years for 'acting against the national security of the country' and 1 year is for 'propaganda against the regime'.

She has also been banned from practising law and leaving the country for 20 years.

During the reform years, in addition to her social and legal activism, Nasrin Sotoudeh worked as a journalist in reformist newspapers. After receiving her license to practice law, she officially began her work as an attorney and she has been working tirelessly especially in the areas of human rights and children’s rights ever since.

Nasrin took on her first case in the area of women’s rights a year after the start of her legal career. Following the launch of the One Million Signatures Campaign and the widespread growth of the women’s rights movement, she represented many women’s rights activists and especially Campaign activists fully pro-bono and without the smallest monetary expectation.

She is a member of the board of directors of the Society for Defense of Children’s Rights where she defended victims of child abuse.

Following her attempt to save the life of Arash Ramanipour, who was hung in January 2010 for crimes he had allegedly committed under the age of 18, she went on record to reveal the illegal process of conducting his execution.

At that time, she was threatened that if she publicly spoke on the cases she represented, she would be arrested.

Video by Family of Nasrin Soutedeh 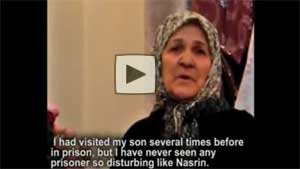 In 2008, Nasrin was awarded the International Human Rights award of Italy.

The award ceremony took place in the city of Mirano in Italy on December 10 –the anniversary of the adoption of Universal Declaration of Human Rights by the UN.

Unfortunately Nasrin was placed on a travel ban as she was departing for the award acceptance ceremony and was therefore unable to attend.

Witness of Your Strong Will Power

I sincerely praise you for the path you have chosen to achieve justice for the needy. Children are innocent, We are the guilty ones. No child is corrupt or sinful at birth. In today’s civilised world the international laws forbids under aged from execution .

We teach them violence before teaching them Love. the father beats the mother. brother beats the sister. Neighbours are at each others throat. Evil’s action becoming more common. Bellowing up the house of faith and taking lives of believers. Children copy the evil’s action before having the chance to learn otherwise.

Now it’s our turn. We keep him in prison till reaches adulthood. He now understands the meaning of crime but it’s too late. We hang him and mourn his death. On the other hand the wise one learn from his misfortunes and take different rout. wisdom cures and soon he is qualified to enter in to the society.

Should that be the case what difference is between us and the butcher that fattens the lamb for slaughter.

Dear Nasrin, with respect and gratitude of your effort to the inhuman execution of youngsters and support the victims I present you with the poem that have written for such occasions and hope to be a form of appreciation for all of your humanitarian activities.

I congratulate you for winning such prestigious award and remind you that people like yourself makes prizes worthy and without any doubt you have done that.

I wish you and all the Iranian women happiness, my honour is to be one of the many thousands.

(From a poem by Simin Behbahani for Nasrin and Iranian Women)

"Why the sun became dark?

From the darkness of your sorrow?

Why are star’s staring?

What really was your guilt?"