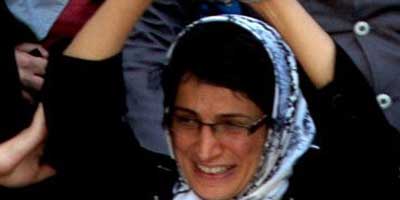 Jailed Iranian human rights lawyer Nasrin Sotoudeh is being summoned to court again, this time for the suspension of her licence to practice law.

Sotoudeh’s husband, Reza Khandan, told the Kaleme website on Sunday that his wife will have to appear in court next Sunday May 20.

Khandan said: “This trial is taking place because the judiciary has called on the Bar Association to suspend or annul Sotoudeh’s legal licence.”

The process began last year with a preliminary hearing and will now continue next week.

Last June, as Sotoudeh was brought to the hearing in handcuffs, she embraced her husband in front of court security officers, creating a buzz in the media.

Nasrin with husband Reza at last court appearanceKhandan explained that Sotoudeh’s problem next week will be that her legal representative in the case is Abdolfattah Soltani, who has since been put behind bars as well. Sotoudeh will, therefore, have to find another lawyer on short notice.

Soltani was arrested last September and later sentenced to 18 years in jail, 20 years of exile and a ban on practicing law.

In the past year, many human rights lawyer have been the target of government persecution. The government has come to regard their activities as adverse propaganda against the regime and, hence, a threat to national security.

Sotoudeh has been sentenced to six years in jail and a 10-year ban on practicing law.