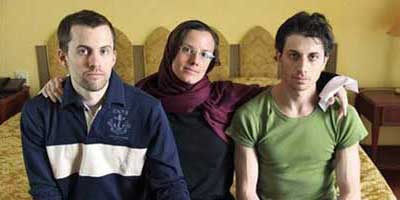 "Sarah had a very emotional goodbye with Josh and Shane. They were both very, very happy for her. I think it was difficult for all of them. My brother Josh said to her that it was "one-third freedom"...

Sarah responded that was exactly right. It was one-third freedom for her too."

In April 2010, despite sporadic rumours of imminent release, they were still in prison. I arranged to interview Sarah's mother, Nora.

When I spoke to Nora, I knew we had to take up the case. There was a real feeling of empathy with Sarah. I felt certain that, if she wasn't in prison, our paths would have crossed in some way sooner or later.

I was alarmed to learn that Sarah had been in solitary confinement the whole time and that there were serious concerns over her health and that she may even have cancer.

Amnesty International, Reporters Without Borders and similar organisations had not taken up the case. Sarah, Shane and Josh didn't seem to fit into any 'categories'.

There were no corporate media companies supporting them, as Shane was a freelance journalist and not on the staff of a media corporation.

Here were three ordinary families, with no real experience in campaigning and with very limited financial means. The advocacy was largely led by the three mothers. Finance was raised through simple fundraising events and online donations.

Sarah Shourd was brought up singly-handedly by her devoted mother, Nora, in Los Angeles, California.

From a very young age, Sarah was an advocate for women's issues. When she left school, Sarah went to Mexico to speak out for the 'Feministas' - victims of female genicide.

A few years later, Sarah felt compelled to travel to New Orleans to help the victims of Hurricane Katrina. She set off with friend Shon Meckfessel.

Sarah and Shon found they had something in common, besides a passion for humanity. They both knew Shane Bauer, an investigative journalist who covered humanitarian issues. Shon and Shane had been on the same Peace Studies course at UC Berkely. Sarah, also a UC Berkely graduate, had just started dating Shane.

Shane comes from a rural Minnesota background. Even as a child, he was drawn to speak out for the oppressed and asked his parents' permission to stand up for the Native American chilren when there was a move to exclude them from his school.

"He doesn't have a mean bone in his body" says Shane's father, Al.

Shon recalls, "Shane was very mild-natured. I don't think any of us had seen him be angry. He was skilled at being diplomatic and empathetic. He could relate to anyone. Everyone warmed to him".

While at university, Shane made a powerful, eye-opening film about the homeless in San Fransico, 'Hotel Poverty'.

He enjoyed the multi-cultural scene of Bay Area and was drawn to the family-oriented approach of Middle Eastern culture. At university, he specialised in Arabic, at which he excelled. He felt a strong grasping of Arabic was essential to understanding Middle Eastern culture and helping to break down barriers between nations.

Shane shared a house with Josh Fattal from Pennsylvania, who was studying Environmentalism at UK Berkeley.

Josh went on to work at a centre for sustainable living, 'Aprovecho', in Oregon. He was passionate about developing a '100 Mile Project', devoted to sourcing locally-grown food.

With the encouragement of Josh's brother, Shane and Josh set up a blogsite together, focussing on social issues, with the intention of reporting back from their travels, 'Aprovecho America'.

On graduating, Shane and Shon travelled to Bosnia, volunteering for a charity helping orhpans of the war.

"This made a huge impact on him, to see the ravages of war. He saw children living in card-board boxes", says Shane's mother, Cindy. "He works for peace, not injustice".

Next, Shane travelled to Sudan with film-maker David Martinez where they spent a few weeks with a rebel army in Darfur, resulting in the insightful film, 'Songs of Enemies and Deserts'.

When Shane and Sarah met, Shane was due to travel to Ethiopia and then to Yemen. Sarah went with him. That was Sarah's first real taste of Middle Eastern culture and her blogs tell that she felt very at home and learnt a great deal from the women there. Shane's mother Cindy came to visit and was made very welcome by the local community.

Intrinsic to Sarah and Shane's life and work, was an overwhelming passon to break down cultural misconeptions and stereotypes. To start to build bridges of understanding and to take every opportunity to speak up against injustice.

Already, highly respected journalists such as Sandy Close and AC Thompson had spotted Shane and he found work reporting for 'New American Media', 'The Nation' and 'Mother Jones', rapidly gaining a reputation as being of the 'new breed of photo-journalist' - objective, free-spirited and sincere. So much so that Sandy herself says that she stretched the budget especially to commission Shane who filed many articles with New American Media in 2009. Shane's outstanding articles, films and photography can be  seen on his website www.shanebauer.net.

In December, 2009, Josh left Aprovecho to teach Globalization & Health, Culture & Community with the International Honors Programme. He travelled with a group of undergraduates to India, China, South Africa and then Switzerland.

On finishing his teaching work, Josh then met up with his brother Alex in Italy and they travelled together to Sweden where Alex was studying. This was to be the last time Alex saw Josh.

Sarah and Shane moved to Syria together, where Shane did the only English language interview with Hamas leader Moussa Abu Marzouk, 'Hamas Leader: "We Will Not Surrender"’, for New American Media.

Sarah got a volunteer role teaching English to Iraqi refugees and began studying Arabic.  She was interviewed about her work with the Iraqi Student Project for the film 'Stranded in Syria' by Josh Vardey.

Nora visited Sarah and Shane at their home in Damascus and was encouraged to see how well they had settled in and was touched by well how they were so obviously accepted and loved.

Sarah wrote in her blogspot, 'Through Unfettered Eyes', that she was aware their chosen path may be risky. She chose to post a perhaps ironic quote from Helen Keller, 'Security is mostly superstition. Life is either a daring adventure or nothing at all'.

Sarah was about to have an article published, in Women's E-News, about a successful campaign against the introduction of a 'Family Bill' in Syria, which if passed would have encouraged oppression of women: 'Syrian Women Reflect on Rare Political Victory'.

For a while, Shane was away in Fallujah, interviewing Eifan Saddun al-Isawi, head of Fallujah's Sahwa, or Awakening, council, the Sunni militia hired by the United States in early 2007 to fight its enemies in Iraq.

Back in Damascus, Shane devoted long hours to typing up his article which exposed misuse of US funds in Iraq, for a Mother Jones article, 'The Sheikh Down'.

Sarah had a few days off work and they both felt ready for a short holiday.

Sarah and Shane met up with Josh in Istanbul, and the three of them travelled back to Damascus together for a friends' wedding, where they were joined by Shon.

Another friend told them of about a beautiful tourist destination, not so very far away, in Iraqi Kurdistan. Very different from other parts of Iraq. Safe and peaceful and promoted by US travel companies as 'The Other Iraq'.

They decided to leave for Kurdistan the day after the wedding. An Arabic student from the UK, Emma, was marrying Basil, a Palestinian refugee. Sarah and Shane helped Emma and Basil with wedding preparations and then happily danced the night away in an idyllic 'Arabian Nights' faery tale setting.

Emily and Basil have their own sad love story to tell. A year later, when Safe World interviewed Emily, they were still not living together because of UK immigration laws.

On July 27th, Sarah, Shane, Josh and Shon wished their friends well and set off through Turkey for their holiday.

When they reached Sulaymania, Sarah, Shane and Josh left the guest-house to go camping by a waterfall many locals had recommended to them. Sarah sent Nora what would be her last email for over a year. The next day, Shon, who was setting off to meet up with them, got a phone brief call from Shane to say they had been taken by guards. He asked Shon to contact the US Embassy.

What happened next is not known. A week later Iran's Foreign Ministry was saying it could neither confirm or deny their 'arrest'. It was another week before it was officially announced that Sarah, Shane and Josh were in Evin Prison, Iran.

Little is also known about Sarah, Shane and Josh's lives over the next thirteen months. They were only allowed four Consular visits by the Swiss, one visit by their mothers and a total of four short phonecalls (one each for the men and 2 for Sarah,). There has been virtually no communication with the outside world. Their lawyer had been denied access until two days before Sarah's recent release.

We know that Sarah, Shane and Josh were each kept in solitary confinement for the first 2 months, while undergoing interrogation. They were blindfolded when they met for meals.

Sarah continued to be held in solitary confinement. She had an hour a day with Shane and Josh. They no longer ate together, but they would save food to share together in the excercise yard, making 'prison cakes'.

They would tell each other stories and sing songs.

It was in the prison excercise yard, back in January, that Shane proposed to Sarah.

"It would have been Shane's way of telling Sarah how much he loved her and that he wanted to love and care for her for eternity... I know he loves her dearly", said Shane's father, Al Bauer.

Shane wove an engagement ring out of shirt threads. Sarah and Shane asked Josh to be their 'best man'.

In May, when their mothers were finally allowed to visit, Sarah proudly showed off her ring and Shane 'formally' asked their permission for the marriage!

In July, Nora and Cindy came to the UK to raise awareness about Sarah, Shane and Josh's imprisonment. Cindy spoke at the Front Line Club in London about Shane's imprisonment, as a journalist. She discussed the situation with Iranian-Canadian journalist, Maziar Bahari, and Sina Motallebi from BBC Persia, both of whom have spent time in Evin Prison themselves. Also on the panel was Drewery Dyke, Amnesty International's Iran Researcher.

Sarah was finally released on bail from Evin Prison, Iran, on September 14th, 2010, into worldwide media attention. Shane and Josh remain in prison, awaiting trial. It is unclear what the charges are. Sarah may also stand trial.

What it must feel like to come from spending 23 hours a day entirely alone in a small cell, to find that you are the centre of global attention, can barely be imagined.

At the same time, leaving behind dear friends who have been your whole world for well over a year.

Sarah Shourd was held in solitary confinement in Evin prison, in Iran, for 410 days until her release on bail in September 2010, after a world-wide campaign.

Iranian authorities released Sarah on 'compassionate grounds' but are continuing to hold Shane and Josh. They have been sharing a small cell together for over a year and are currently on trial for espionage.

Shane and Josh are being denied adequate legal access and basic human rights.

To help free Shane and Josh: