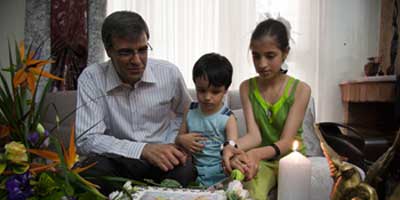 Family of Nasrin Sotoudeh taken in 2011

The Iranian judiciary banned the husband and daughter of jailed lawyer Nasrin Sotoudeh from leaving the country.

The International Campaign for Human Rights in Iran reports that Reza Khandan and his daughter Mehraveh have received separate summons notices informing them of the travel ban. They have 20 days to appear in court if they wish to challenge the decision.

Daughter Mehraveh with husband Reza KhandanMehraveh Khandan is only 12 years old, and the reason for her travel ban has not been stated.

This is the first time the minor child of a political prisoner has been issued such a sentence.

The International Campaign for Human Rights in Iran says this move is “another measure of psychological pressure on political prisoners.”

Khandan has told the Campaign: “We hadn’t planned any trips. I believe this was done with the objective of destroying the psychological and mental balance of our family and to inflict shock on all the family members.”

He went on to add: “My 12-and-a half-year-old daughter has been issued a travel ban ruling and a summons to court, but charges for children and minors must be reviewed in juvenile courts.”

Sotoudeh, a prominent human rights lawyer, has been sentenced to six years in jail and a 10-year ban from practicing law. She was charged with “acting against national security, collusion and propaganda against the regime and membership in the Defenders of Human Rights Centre.”

She was arrested in September of 2010 and has been in jail ever since with no furloughs to spend time with her family.