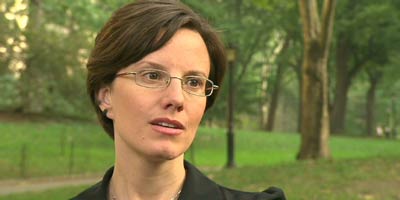 Sarah Shourd, her fiance Shane Bauer and their friend Josh Fattal, US citizens, were taken hostage by Iranian security guards in Iraqi Kurdistan in July 2009.

Sarah was held in solitary confinement in Evin prison, in Iran, for 410 days until her release on bail on 14th September 2010, after a world-wide campaign.

Shane Bauer and Josh Fattal were released the following year, in September 2011.

Sarah Shourd: "The Situation is Not Over"

"It's a very hard thing, to keep yourself strong."

Chris Crowstaff and Andrew Sampson from Safe World interviewed Sarah about her experiences in one of the most notorious prisons in the world.

Sarah describes survival when you are on your own, 23 hours a day, and talks about how her two friends may be coping, locked up together with no idea of how much longer the ordeal will continue.

"I love talking about Shane"