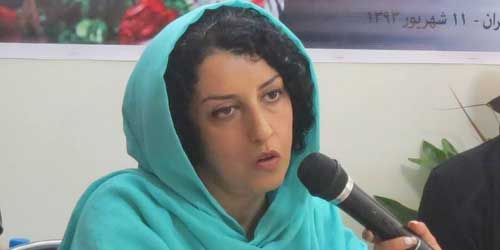 Prisoner of conscience and human rights activist Ms. Narges Mohammadi, while remaining medically uncared for despite her deteriorating conditions, has been informed that her trial would be on April 20.

Ms. Mohammadi, a renowned activist, Deputy Director of the Defenders of Human Rights Center in Iran, President of the Executive Committee of the National Council of Peace in Iran, a key member of the campaign for the abolition of the death penalty in Iran, has been in and out of detention during the last 10 years.  Last year while she was not summoned to turn herself in, she was arrested during a raid by intelligence Ministry at her home without a judicial warrant and then transferred to Evin Prison on May 5, 2015.

In order to put pressure on this political prisoner, all her medicine was taken away from her upon her transfer to her ward and she has been deprived of her medicine.  The Iranian government has charged her with "spreading propaganda against the system" and "assembly and collusion against national security."

Her current detainment is a punitive response for her peaceful yet continuous human rights activities in Iran which include a whole range of activities that are not tolerable by the Islamic Republic of Iran:

While standing next to the mother of Sattar Beheshti, she questioned “Is there a greater evil than killing innocent people like Sattar Beheshti, like Homa Saber, like Haleh Sahabi, like Neda Agh Sultan, like Sohrab Aerabi, and 1,000 & 1,000 others? Has a society experienced greater evil than this? So why don’t you prevent it? Why do the courts not address these killings? Which one of these cases has been resolved?”

Narges Mohammadi is mother of two and has been deprived of seeing her children for the past eight months. Three months into her last imprisonment, on August 4th, 2015, she wrote a letter from Evin Prison on what it means to her being apart from her children.

She wrote “I was not allowed to hold my son Ali and my daughter Kiana when they were born because of my poor health. I was only able to see them through the door of the hospital room. It seems as if their fate was to be apart from me from birth. When I held them for the first time, all the scars from the caesarean, the difficulties I had breathing, the fear of death and all the pain were forgotten. I had become a mother.”

She continued in her letter to children who were leaving Iran to be safe with their fathers in exile, “My chest is on fire - I’m looking at the clock now and Ali and Kiana’s flight has taken off. And I, a mother in pain who is tired of hurt and suffering, has stayed behind. My heart has been torn into hundreds of pieces. My hands – without even trying – face the sky.   Dear God, please take my hands and give me the patience I need. For a long time, I won’t be able to see their innocent faces. I won’t be able to hear their voices. I won’t be able to smell them while holding them in my arms. Oh God, my arms feels so cold and empty without the presence of my children. My hands move towards my chest which feels as if it’s on fire. My cheekbones burn from the tears that run down my face. The lava flowing from my eyes feels like fire from the depths of my heart.”

Four years ago, in an article on the challenges of imprisoned mothers in Iran and Narges Mohammadi with the title of What do imprisoned mothers in Iran fear the most? ‘Being forgotten’ published by Women News Network in 2012, I wrote “Imprisonment is not easy in Iran. It impacts women differently than it does men, where impunity can cause women to face increased fears of sexual advance, violence and intimidation in prison. Many women prisoners also have specific needs that relate to female health and psychological trauma. Prisoners who are also mothers have added needs because of worry about their children.”

On the brink of her hearing on April 20th, Narges Mohammadi’s children are no longer living in Iran, she is still very ill and despite all the empty promises of President Rouhani, the human rights violations still have not improved.  The continuous high number of executions and arbitrary detentions are a strong testimony to the fact that the Islamic Republic of Iran does not have the political will to respect human rights and dignity.

On April 4, 2016, Amnesty International called for an urgent action on Narges Mohammadi stating “Iranian human rights defender and prisoner of conscience, Narges Mohammadi, has been informed that her court hearing is scheduled on 20 April. She has not been allowed to make any contact with her children for over eight months. She remains critically ill.“ and continued with the following action items:

Where: NW corner of the Federal Building in Westwood

Peace activist and WNN special reporter on Iran, U.S. based Elahe Amani has kept a strong pulse on human rights for all women since her early days of activism in Iran in the early 1970s. Today she works with immigrant women who are part of South Asian, Iranian and the Middle Eastern ethnic communities in Southern California to help them build peace at home and in society. In 1995 Elahe was an active organizer and delegate at the Fourth World Conference on Women in Beijing, China. At present she is the co-chair of Global-Circles for San Francisco based Women Intercultural Network (WIN), a global women’s organization with consultative status at the United Nations. Working with grassroot circles in Uganda, Japan and Afghanistan, as well as a leadership role in the dynamic CEDAW for Cities campaign, Elahe has also lectured through the Women’s Studies Department and is also on the advisory board of The Women Center at CSU – California State University in Long Beach, California.