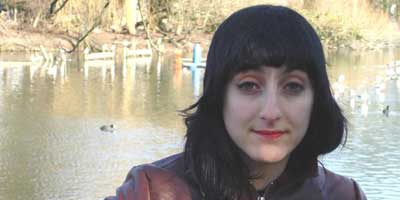 Thank you for taking the time to talk with us. Could you start by saying a bit about yourself and your work? You write and perform comedy - does that contrast with your other work?

I would say that I’m a visual artist, comedian, writer and broadcaster and an active campaigner for women’s rights – a sort of multifaceted life form, like many people nowadays!

Expectations of comedy need to be broadened. Certainly brilliant comedy is not just about laughter, as it often addresses serious issues in profound and inventive ways.

One of the most powerful points behind the ‘Free Hengameh Shahidi’ stand-up comedy night, was that it underlined the treasured freedom we have to laugh and mock the establishment in this country. In Iran, being part of an underground satirical comedy scene would inevitably mean risking your life!

When and how did you meet Hengameh?

There was a downpour of rain and everyone crowded into a bus stop in Tottenham Court Road.

Suddenly another woman and I started laughing. Something struck us both as funny. I can’t even remember exactly what it was now!

We started talking, got on the bus together, and didn’t stop talking the whole way back.

I learnt that the other woman was called Hengameh and lived at North Finchley. I lived at Muswell Hill, a bit further along the same bus route.

Hengameh told me that she was from Iran, studying at Oriental and African Studies at the University of London, and has a teenage daughter. We talked about all sorts of things, life, attitudes – and we found a lot to laugh about and shared a similar sense of humour. Hengameh was the first Muslim woman I ever met. We found we had a lot in common.

We swapped phone numbers before we parted.

Did you meet often over the next few years?

Hengameh came along to the first ever pilot of a BBC comedy series I was starting on. It was performed in front of a live audience. She may not have understood it all but she enjoyed it.

The series was called ‘A series of Psychotic Episodes’. It was about people who were trapped by circumstances, by life, which is now a very sad irony.

I remember meeting another time at Hengameh’s friends’ restaurant, where there was a big meal and a dance, just for friends and family – we took over the whole restaurant!

We met weekly at a Turkish restaurant in Muswell Hill. We talked about life in general, and Hengameh’s life when she was in Iran.

How would you describe Hengameh?

Hengameh was a practising Muslim and she always wore her head-covering. She helped me to understand the Muslim world. I have middle-eastern roots. My dad was born in Lebanon and his father was from Syria. My grandmother’s family were from Palestine.

Hengameh loved being in the UK and the freedom she experienced here.

She is very aware and intelligent with a rebellious spark - a questioning, enquiring mind. Really really bright.

She had a great sense of humour and we continued to share a lot of laughs about life.

She also had a very serious side and was very concerned about human rights abuses in Iran.

And she writes brilliantly. You should look up some of her writings.

When Hengameh returned to Iran, shortly before the elections, do you think she felt she was in danger?

Certainly I feel she knew she it could be dangerous. But I guess she felt she had to be there at such a critical time. Many women in Iran felt that they had no rights and so therefore they had nothing to lose.

When did you learn of Hengameh’s arrest?

The last time I rang Hengameh’s phone, in July 2009, there was no answer. It went through to the answer machine. Shortly afterwards I learnt that she had been arrested.

I went into overdrive then.

I arranged the Free Hengameh Shahidi comedy night, with Amnesty International, in London at the Bloomsbury Theatre, with a big cast of high profile personalities.

Hengameh’s case got good media coverage and we raised funds which went towards paying for her bail when she was temporarily released.

When she was subsequently tried and sentenced to six years imprisonment I really didn’t know what to do next.

I set up the Free Hengameh group on facebook and continued campaigning for her online. There is a major push for her release planned for International Women’s Day, March 8th.

From what you know of Hengameh, how do you feel she might be coping?

I will be continuing to do all I can for her. Hengameh is a very very strong woman. A survivor. I have a feeling that she’ll cope, in spite of all the atrocities she has endured.