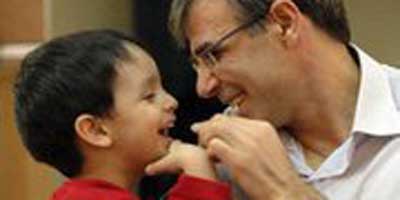 How do you turn your back on an innocent 3 year old boy longing for his mother? Tell me how? How do you ignore the plight of an innocent child who has been deprived of the comfort of his mother's arms? What was her crime you ask? Why was she taken away from her family and sentenced to 11 years behind bars?

Nasrin Sotoudeh dared to stand up for Human Rights. She dared to represent the voiceless in a court of law. She had the courage to stand up for hundreds of prisoners of conscience behind bars in the Islamic Republic of Iran. How can we turn our back on Nasrin Sotoudeh, her husband Reza Khandan and her two innocent, young children? It is now upon us to act as the voice for the voiceless, for if we turn our back on Soutoudeh and her 3 year old son and young daughter, we will have turned our back on humanity...

Tuesday April 12th, 2011 - In an interview with The Center to Defend Families of those Slain and Detained in Iran, Reza Khandan Nasrin Sotoudeh's husband points to the psychological pressure exerted on his family by Iran's judiciary. Khandan also describes how they have been deprived of basic rights afforded all prisoners such as visitation with his incarcerated wife and the painful circumstances of their two young children who have been brutally denied of their mother's presence at such a tender age.

Mr. Khandan, if at all possible, can you please describe Nasrin Sotoudeh's condition and the pressure exerted upon her and your family?

I visited the prosecutor's office prior to the Persian New Year [Norooz] requesting a face to face meeting with my wife.

They asked that I provide them with a written request and I complied.  In response to my written request and in the presence of 30 - 40 individuals, they stated that they would grant us a face to face visitation which they later reneged. On Thursday March 24th, we planned to visit with Nasrin as Thursdays are visitation days, but we were told that the prison was closed [for the Norooz holidays].

The next week, on Thursday March 31st, we once again headed for Evin with the hope to visit with my wife. Many others from across the country and other provinces were also waiting to meet with their incarcerated loved ones on that day, but the prison gates were once again closed. Unfortunately when the prison gates are closed, no one is available to answer any questions. We waited for 4 or 5 hours, losing almost an entire work day and still no one showed up. To date we have had only three, ten minute phone conversations with Nasrin. I no longer attempt to contact the prosecutor's office as it is fruitless.

The last time I approached the prosecutor's office, I was arrested for approximately 10 minutes under the pretext that I had raised my voice. The prosecutor does not feel obligated to answer any questions. As a result, I have stopped contacting his office and making any demands.

How are your children holding up? Do they miss their mother?

We some how manage, but it's very difficult on the kids, particularly during Norooz when people visit each others homes. While they themselves [the regime officials] were busy with the hustle and bustle of Norooz and visiting their loved ones to their heart's content, they deprived us of all visitation. We were neither allowed a minute of face to face visitation nor even a visitation from behind a cabin.

My son is unable to cope. He has lost all hope. Last night during a short telephone conversation with his mother he broke down and told her that she was never going to come back.

The reality is slowly sinking in and things are deteriorating with the passing of each day.  His mind is filled with strange notions. He is convinced that his mother is never coming back. He argues with me and insists that she is not coming back.  My daughter has her own problems. Her aunt is even more worried about her, because she has a tendency to internalize everything. She is also at a challenging age. I'm at a loss. I don't know what to do....

I think we may just go outside the prison as a family, set up a tent and remain there in protest. No one answers us. No one pays any attention to the myriad of letters we have written [to the prosecutor and the judicial authorities]. It is because of my letters that I was summoned and a case was filed against me.

In the past eight months our children have not even met with their mother for an hour.  Based on Iran's laws, it is intolerable that a child (a three year old toddler) be deprived of seeing his/her mother.  Even though we visited others during Norooz, I wish we hadn't, as the children really missed their mother.  Her absence was very apparent. What could I do? In the end I was forced to take them away from Tehran....

Center to Defend Families of Those Slain and Detained in Iran

Updates from Nasrin's husband and other sources