Nasrin Sotoudeh's letter to her son 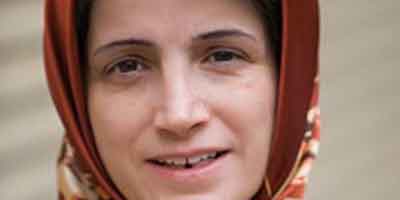 The Feminist School: Nasrin Sotoudeh, lawyer and human rights activist, behind bars at Evin prison for the past 9 months, has written a letter to her 3 year old son Nima; a letter than was written on a few pieces of tissue paper, given that she has no access to real paper.

Writing a letter to you my dear Nima is so very difficult. How do I tell you where I am when you are so innocent and too young to comprehend the true meaning of words such as prison, arrest, sentence, trial, injustice, censorship, oppression versus liberation, freedom, justice, equality, etc.

What should I tell you my son? Last week you asked me "Mommy are you coming home with us today?" and I was forced to respond in plain view of the security agents: "My work is going to take a while so I"ll come home later." It is then that you nodded as if to say you understand and took my hand, giving it a sweet, childlike kiss with your small lips.

My dear Nima, in the past six months, I found myself crying uncontrollably on two occasions. The first time was when my father passed away and I was deprived of grieving and attending his funeral. The second was the day you asked me to come home and I couldn't come home with you. I returned to my cell and sobbed without control.

My dearest Nima, in child custody cases, the courts have repeatedly voted that when it comes to visitation rights, a three year old child cannot be left with their father for 24 consecutive hours. This legal precedence has been established because the courts believe that young children should not be away from their mothers for 24 hours and that such a separation would result in psychological damage to a child.

This same judiciary, however, is capable of ignoring the rights of a 3 year old child under the pretext that his mother is seeking to act against the national security of the country.

It goes without saying that it pains me to have to explain to you that I was not seeking in any way to act against "their" national security and that as a lawyer, my only objective has always been to defend my clients under the law.  Nor do I wish to prove to you for example, that the content of the interviews I gave are available to the public and as a result of my criticism of the judicial rulings, inherent in my role as a lawyer, I have now been considered worthy of 11 years behind bars.

What I want you to know my beloved Nima is this: firstly, although I am not the first person to have received such an unjust sentence, and I know that it is highly unlikely and wishful thinking on my part, I nevertheless hope that I will be the last.

Secondly, I am very pleased and if nothing else more at peace now that I am being held in the same location as many of my clients; clients whom I was unable to defend effectively and now find themselves behind bars as a result of the illegal judicial process.

Thirdly, I want you to know that as a woman, I am proud of the heavy sentence rendered against me and honored to have defended many civil activists and individuals protesting the election results.  I am pleased that if nothing else, as their lawyer I have received a heavier sentence than they have.

The relentless efforts by women has finally proven that regardless of whether we support or appose them, they can no longer be ignored.

I am not sure how to ask this of you my beloved Nima. How do I ask you to pray for the Judge, to pray for my interrogator or the judiciary? Pray my son that they find justice and peace in their hearts so that we too can someday be allowed to live in peace like so many other countries in the world.

My dearest, when it comes to such cases, the final winner is not determined based on whether or not an effective defense has been presented, for in that regard my lawyers did everything in their power to defend me. What is at stake rather, is the oppression of innocent human beings, trampled upon and crushed under the wheels of such strange ideals. It goes without saying that in the game of life those who are innocent will always prevail; and so I ask you my dear Nima, with all your childhood innocence,  to pray for the release of not only political prisoners but all innocent prisoners.

Translator's note: As I translated Nasrin Sotoudeh's letter to her 3 year old son Nima, I found myself sobbing with Nasrin who had been forced to look into Nima's eyes and say that her work was going to take a while and she would not be going home yet, when he so innocently asked "Mommy will you come home with me?"  I cannot imagine the unbearable anguish and heartbreak she must have felt when he nodded as if to say he understood and kissed her hand with his sweet lips. I implore everyone who believes in the right of an innocent mother to be with her 3 year old child, NOT to turn their back on Nasrin, her 3 year old son Nima, her 11 year old daughter Mehraveh and her dedicated husband Reza Khandan, for turning our back on this courageous family who has sacrificed so much so that we all may someday live in an Iran that respects human rights, is turning our back on humanity.