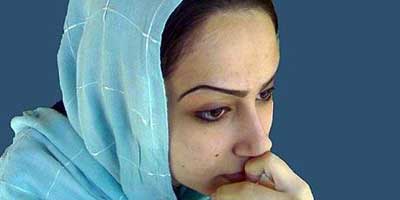 Delara Darabi (Persian: دلارا دارابى)  was sentenced to death by hanging when she was only 16 years old. She was convicted of murdering her father's female cousin in 2003. Although Delara initially claimed that she had committed the crime, she subsequently recanted.

Darabi served five years of a prison sentence for theft on death row after her conviction (in Iran, prisoners often have to serve time in prison before execution). She initially confessed, but later recanted, claiming Amir Hossein, persuaded her to confess by convincing her that he would be executed.

Darabi was herself executed in May 2009. 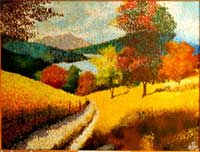 While on death row, Darabi, having developed a love of painting at an early age, completed several works that depicted her incarceration. In confinement, she also wrote poetry.

Among her work is the poem entitled "Prison", a psychological and philosophical work on life in prison.

A collection of her art was displayed at an exhibition in Tehran by supporters campaigning her release.

Darabi's lawyer, Abdolsamad Khoramshahi, had appealed against the sentence, arguing that her conviction had been based solely on her confession and that her trial had failed to consider vital evidence.

Delara Darabi was originally scheduled to be executed April 20, but her execution was stayed and postponed for two months by the head of the judiciary after massive domestic and international pressure.

But then she was unexpectingly executed less than two weeks later. Her attorney was not informed in advance, to avoid news about the execution leaking out.

She was executed at 5:00 AM local time on 1 May 2009 at Rasht Central Prison, without prior notification to her attorney and family. Just minutes before being hanged she was allowed to make a desperate last phone call to her parents, and she pleaded for them to save her, followed by the prison warden's voice informing her parents she was to be executed for her crimes immediately.

Oh, Mother, I see the hangman's noose in front of me. They are going to execute me. Please save me.

"She was denied a legal right guaranteed under the law. The hasty execution and the ignoring of legal provisions suggests that some authorities were happy to put an end to her life"

He also said that the court did not seriously consider his arguments in the woman's defense.

For example, Darabi was left-handed, while all the evidence suggested the crime was committed by someone who was right-handed.

While Delara was still in prison a film was made about her, featuring interviews with her mother and father.

"A Prisoner of Colors"