Iranian law is inherently biased against women. Evidence given by women in an Iranian court is held to be worth half that given by a man.

The Islamic Penal Code permits allows the judge to rule based on their personal knowledge or intuition of the defendant’s guilt.

If the presiding judge has first-hand knowledge that the defendant is guilty, no additional evidence is required to find the defendant guilty of the charge.

There are no female judges.

Adultery is considered as a capital offence in certain cases and the typical sentence is death by stoning. As stipulated by the Islamic Penal Code, women are to be buried in the ground up to breast level and the stones must not be large enough to kill quickly.

Lesbianism (Mosaheqeh) is punishable by flogging for the first three 'offences'. However, if committed a fourth time, the result is the death sentence.

Moharebeh (Mohareb, Muharebeh) is also a capital offence. It is often used to target women's rights activists, political dissidents, GLBT, ethnic and religious minorities and can be interpreted as 'cooperating with foreign agents or entities' or 'working to undermine the Islamic system'. 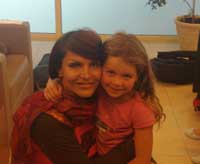 Zahra visited Iran in December 2009 and participated in a demonstration.

She was arrested for her participation, additionally charged with drug possession and sentenced to death.

She was executed without prior notification by the Iranian authorities detaining her, even when an agreement had been made with the Dutch authorities to delay execution while it was preparing for lawyers to visit her.

She became a household name in Iran in 2003, when her murder trial was filmed and made public.

She was tried on charges of murdering Laleh Saharkhizan, the wife of Naser Mohammadkhani, a football legend who rose to fame in the mid-1980s and coached Tehran's Persepolis club.

Members of Laleh Saharkhizan’s family were present at the execution and it is reported that her son removed the bench from under Shahla Jahed’s feet leaving her suspended.

Shala had maintained her innocence throughout. In 2005, Shahla Jahed's lawyer requested a review of the execution order, arguing that Shahla Jahed’s case had not been properly investigated.

Shirin Alam Hooli was arrested on 26 May 2008 and held in a secret Revolutionary Guard prison for 21 days before being transferred to a political prisoners ward at Evin Prison. According to her lawyer, Shirin was severely tortured at the Revolutionary Guard detention center and due to the appalling injuries she sustained, she spent a week in the medical clinic before officials would accept her into the ward. Shirin was interrogated and tried in Farsi, even though she only had a rudimentary knowledge of the language and spoke Kurdish.

In a letter she wrote in prison dated February 2010: 'In Short, They Did To Me Whatever They Could', details the torture she received in the secret prison. In addition to constant assaults “with punches and kicks, stun guns and wires,” she was harshly interrogated and threatened. She was burned with lit cigarettes and beaten nearly unconscious.

When she began a hunger strike in protest of her torture, prison guards forced a feeding tube down her throat.

The prosecution reportedly could not present any evidence against her at the trial, despite of it Shirin was found guilty of colluding with the Kurdish militant group Party of Free Life of Kurdistan. She was sentenced to death for Moharebeh [armed war against God and the state].

The ten were condemned to death for teaching religious classes to children. The women were beaten and tortured while in prison to the extent that some of their bodies still bore torture marks after execution. At trial and in prison, they were pressured to deny their religion, Baha’ism.

They were given only fifteen minutes to say goodbye to their families driven to Chawgun Square in Shiraz, Iran. According to most accounts of the execution, they were executed that night - marched, one by one, to the gallows so that each was forced to watch the women ahead of her hang and be terrified into denouncing her faith. Witnesses report that they chanted and sang songs in those last moments and professing their collective power over oppression.

The Baha’i women, including two teenage girls were executed on 18 June 1983 by hanging.

The Boroumand Foundation’s OMID Human Rights Memorial lists 302 known women who were executed by hanging, shooting, or stoning between the years 1980 and 1999.

Beginning in July 1988, Iranian authorities executed thousands of political prisoners throughout the country. The majority of them were allegedly members or supporters of political opposition groups such as the People's Mujahedin of Iran (PMOI), the Tudeh Party of Iran, and the Organization of Iranian People's Fadaian.

The exact number of executions during these years is unknown. Estimates range from 4,482 (Amnesty International) to over 30,000, according to some reports. Some of the victims were political prisoners, including students, who had already been in jail for years and could not have been involved in the conflict between the PMOI and Iranian forces.

What is certain is that women were targeted during this period.

The Islamic Penal Code had been passed only a few years earlier and women were subject to the laws which restricted their freedom and effectively demoted their status to that of second-class citizens.

The extent of the massacre, in which thousands were killed during a 6 month time period, leads rights activists and organizations to believe these prisoners were not granted their rights under international law, including the right to legal representation, fair trial, and appeals.